The Ken Jones Classic was the final race of the 2013 Ski Mountaineering Competition Canada Season. After a really hard weekend at Kicking Horse (racing on Saturday and Sunday, banging off a lot of gondola laps on Friday and Sunday), I gave the body a rest with only a couple of days of XC skiing, and a couple of days at Lake Louise checking out the course.

Course: The course involves some of Lake Louise's best descents when considering both steepness and ski quality. As well, I find the length and order of the climbs to be very conductive to racing. The longer first climb separates things, then there are a couple of shorter climbs to jostle around in, and then the long final climb where you need something left in the tank. The descents were all memorable. In Whitehorn II F gully, Eric, Brad, and I were all skiing close together at the same time and sluff balls were pouring down the chute from wall to wall. In Brownshirt main, we were ripping and putting on a descending clinic for those on their second descent. Elevator shaft was skiing great and the slalom through the rock garden was fast, with the final placings on the line!

The treed section at the beginning of the last climb was interesting with some thick forest and lots of traversing outtracks and a meandering skintrack. Our train made a wrong turn, but fortunately we realized our mistake early (no green flags = off course!). A couple of misses on some high speed corners on the descents (they were marked better in previous years), fortunately that didn't change the outcome too much, for us at least!

Engine: I kept my pace steady even though there were times when it felt like I was about to get dropped by Brad and Eric. Although Brad got away near the end, I had enough left in the tank to shed Eric near the top of the last climb, but not enough time or gusto to catch Brad.

Gear: My gear was dialed this year. No skin failures in the cold weather. I used goggles for the first time in a long race because of the cold, and they worked well. My only gear issue would be one that probably plagued many others: my water froze. This could have been combated with a different hydration strategy. Platypus bottle in suit pocket or Camelbak system inside of suit?

Technique: My transitions were good and that kept me in the race, closing the gap before climbs and descents. Very FEW botched kickturns but I would prefer that there be zero botched kickturns. I was able to stay in there on the descents as well.

TSN Turning Point: After racing together for the entire race, Brad snuck away and put in a sizeable gap on Eric (who got caught in a tree) and I (who was fiddling with water to fuel up before the last climb). When we finally emerged from the trees and Brad was back in sight, I was impressed with the damage he had done! I then turned up the pace to shed Eric, but could not close the gap to Brad. We all made mistakes, Brad was strong.

Behind us, Nick and Stano were duking it out, and I'm sure we'll hear more about that on Skintrack.com. results

I enjoyed a great afternoon filled with lots of Paradise laps. It was a great season. Thanks to my parents, the race organizers and sponsors. I am looking forward to 2014.

With a summer mountain bike season on the horizon, it is time to rest. I am looking forward to the spring skiing season and hopefully I can make some turns in some cool places around here. Ta Ta For Now
Posted by Edmonton Ski-mo at 11:48 AM No comments: 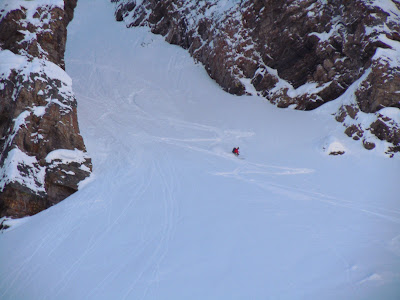 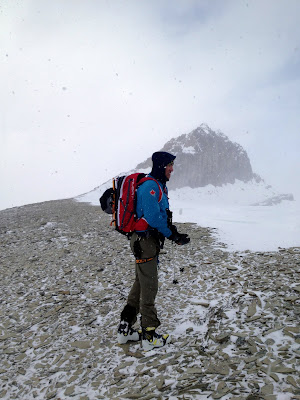 And some more Dogtooth Dash pictures from Martin's roommate Pierre 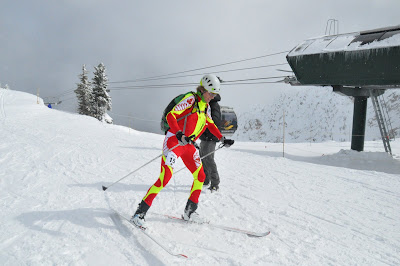 Posted by Edmonton Ski-mo at 7:57 PM No comments:

It was my 4th time doing Canada's premier ski mountaineering event at Kicking Horse, organized by Ian Gale and the events team at the resort. The course is great and the event is well backed by the resort. Gore stepped up with some cash as the title sponsor for the event, dubbed the North American Championships.  Andrew and Reiner are still in Europe, so the race was wide open.

I had a free lift ticket voucher, so I skied the hill on Friday. The freezing levels had risen quite high and things were not looking  too promising, but I quickly realized during the gondola ride up that conditions up high would be game on. I had some of the best runs that I have ever had there and it was hard to resist the urge to keep skiing so I called it quits with an hour until close :) . I was put up in some accommodation that I had won during last summer's Kicking Horse Cup, so a good sleep was a given.


In previous years, I have made use of the included lift ticket and the noon start to burn off a couple of laps in the morning, but this time, I decided to sleep in instead. After a pretty brief warmup, it was time to do battle.

Course: Again, this is the best course in Canada, with lots of transitions, steep skiing, and bootpacks to test your technical skills. The course was modified from two previous years with the last descent changed to the final descent from my first Dash! Leg burner! Otherwise the same 2 non-selective first climbs and the 3rd and 4th, which separate the men from the boys.

Gear: Fresh off my Europe trip, my gear was dialed. Needed the grippy skins for one of the ascents, but I wish I could have spent more time on the faster gliding skins.

Technique: Again, fresh out of Europe, my technique was feeling dialed. My transitions were fast, kickturns were dialed in, and my skiing was feeling the best it has been. Very few mistakes.

Engine: Although I made the mistake of doing some trail breaking to "string out the group" on the first 2 climbs, I was feeling like a hero...until Scott Simmons, up from Colorado sped away on the flat section of the 3rd climb. Eric Carter and I were skiing together all day, pushing the pace hard. He was stronger than me on the day, but I am surprised that I collapsed as bad as I did to lose a minute at the end of the final climb.

TSN Turning Point: The 3rd climb again proved decisive and I was able to settle into my spot ahead of Brad, Ben Parsons from Montana, and Nick.

I am really happy with my race, especially finishing in 3rd place. It again confirms that I made the right decision Re: what to do with my life this year.

After a great buffet dinner, we prepared to battle in the relay race the next day. It was snowing hard, and I opted to race wearing goggles for once! I teamed up with Martin Lafontaine, and wearing jerseys from the teams of our respective provinces, we became "the Separatists". I love the relay format as it is spectator friendly, easy to set up, and is really beneficial to the athletes from a training and technique perspective. We both threw down some fast laps and just barely lost out on the win to the Skintrack.com team of Stano and Eric.

Malcolm was out taking some amazing pictures.
Posted by Edmonton Ski-mo at 8:57 PM 1 comment:

Back in the routine

Legs are still a little "damp" after a week of hard racing in Europe, but fortunately I have a massage tomorrow.

What have I been up to other than racing (and XC skiing and the Canmore Nordic Centre) since I was at Rogers Pass in January? 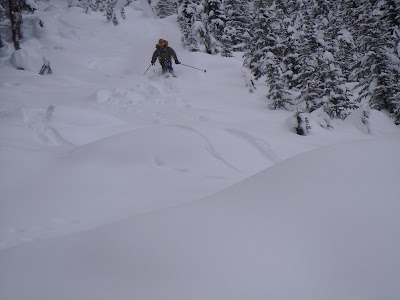 Okay, back from Europe. The legs took a little bit of time to get into it each day. 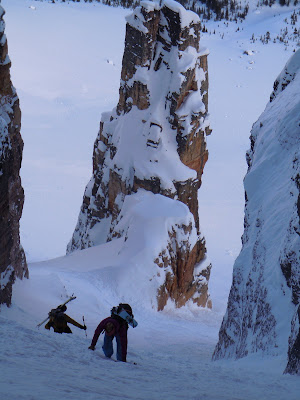 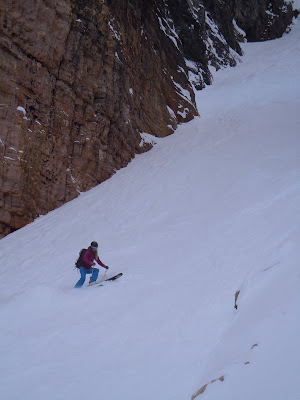 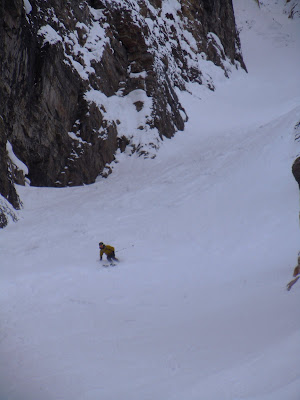 So yeah, hopefully the massage helps me out so I can get ready for...

Posted by Edmonton Ski-mo at 9:56 PM No comments: