This one has been on the list especially after being inspired by Ian's fascination and eventual success with a 7.5hr speed traverse last year. Jerimy was keen while on a trip to Lake Louise and we were able to get Stano along as well. Jerimy had been up to Peyto hut, and I was up at Bow hut last year, but other than that, we were doing the traverse and skiing together for the first time. Weather was looking great. Not a cloud in the sky!

I warmed up with a quick Dolomite Circuit the day before 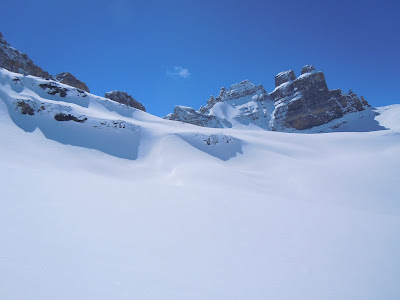 Because Jerimy had been up to Peyto before, we decided to start from there and do the full traverse rather than start at Bow lake for a shorter and easier approach. 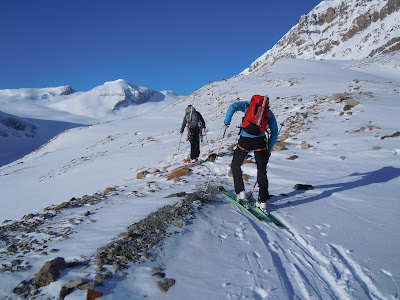 Starting from Bow summit parking (a little higher and a little closer than the normal parking lot), we struggled a bit descending through the trees down to the lake, but at least the snow was frozen solid. Once up on the Peyto moraines, we were a little too high and had to descent a short ways down to the toe of the Peyto Glacier

We roped up and scooted along an old track, and broke some trail instead of going to the hut. The Peyto zone is fascinating with what looks like some great ski descents.
Some more climbing, flat skinning, slight downhill, following tracks, breaking trail brought us towards the St. Nic/Olive col.

After cresting the col, we enjoyed a long "glide" down to the Balfour hut
Fortunately Jerimy and Stano had studied the route well, as I would have thought that the ascent route would go up the gentle bowl looker's left (aka what is actually the final part of the approach from Hector Lake) and not up underneath Mt. Balfour which looked heavily crevassed and threatened by serac fall.

Well what I thought was a crazy route up to Mt. Balfour was actually the way to go! Fortunately once we were on it, it didn't seem as crazy as it looked from afar. It was a really cool section of the traverse to break up the monotony of flat glacier slogging. 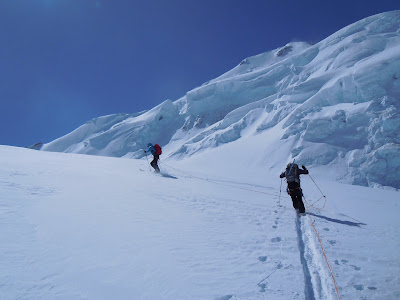 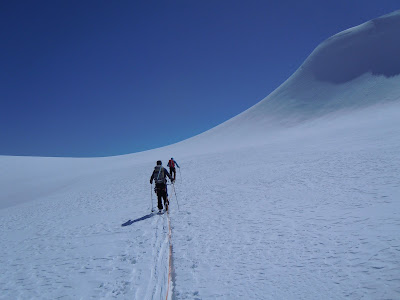 Once at the top of the col, we sat in the sun for a while and then we descended down the other side. I straightlined the whole thing.

Like all of the other climbs, the last one was longer than it looked. At the top, we pulled the skins one last time and traversed, free heeled and sidestepped our way over to the descent slopes (Schiesser-Lomas exit). The top was enjoyable with some light powder snow which turned into some corn on top of crust and then some wet snow in the trees. We got caught a little too far skier's left in the trees where it was really steep. Fortunately, we found the creek and skied down to the lake. Crossing the lake and getting to where the Sherbrooke Lake trail really starts descending was the last effort of the day, we then enjoyed a fast luge run down to the parking lot.

So we finished in just under 11hrs. We were on light gear and conditions were not really that bad other than a bit of trail breaking. Ian and Mel's 7.5hr effort last year (and of course Will Gadd and Co's 8hrs on misery sticks) really blows my mind. I found the treed sections quite frustrating and time consuming. We were definitely not hammering at race pace, but definitely tired at the end.

I actually think the coolest thing about taking 11hrs is it actually puts it close to the same duration as other trips that I have done like "most of Joffre" (12.5hrs) and Lyautey (12hrs). Hmm...what about Fay/Quadra, Columbia, North Twin. The possibilities!

The speed traverse style is cool. We waited for a day with perfect weather. Imagine being "stuck" on a multiday traverse and getting socked in the day you were planning on going over the high col?
Posted by Edmonton Ski-mo at 1:26 PM No comments:

The next wave in Canadian Skimo racing

Posted by Edmonton Ski-mo at 4:49 PM No comments: