Line of the Week: Mt. Maude 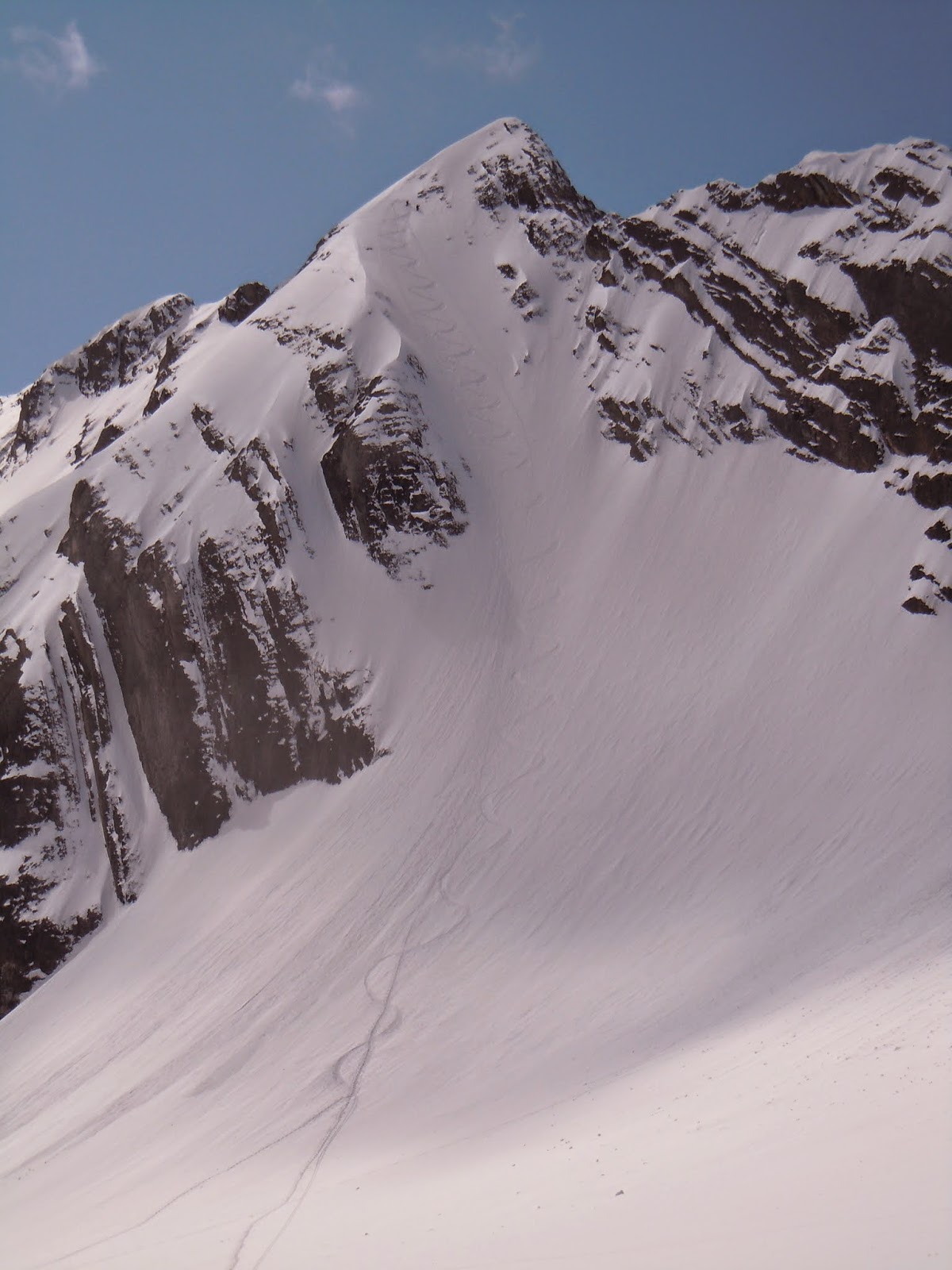 The French-Haig-Robertson traverse is a Kananaskis classic. Pick a day with great weather and you will be rewarded with views and easier navigation once up on the Haig glacier. And the slog up the French glacier is downright miserable with the wind blowing in your face. When you get on the wind scoop at the base of Mt. Robertson, look across the glacier and gaze at the aesthetic line coming off the north ridge of Mt. Maude.

The line is another couple of kilometers from the French-Robertson col and it "grows' to its full 300m as you approach it. Put the skis on the backpack and boot up the face until it thins out near the upper ridge. As this is a steep, high, north face, the skiing should be committing, but soft.

Other skiing in the area: Aside from the classic French-Haig-Robertson circuit, which also makes a fantastic finish to Mt. Maude, there are numerous couloirs in the French glacier drainage. Mt. Jellicoe also holds some potential as a ski descent though it is hard to make it to the south facing line before the sun. Otherwise the skiing in the French drainage or Burstall Pass is fairly mellow should you find conditions are not up to your liking.

Other Lines of the Week .
Other Kananaskis lines.
Posted by Edmonton Ski-mo at 9:43 AM No comments:

Even in a professional setting, I struggle to decipher what exactly is being permitted or prohibited by a standard or code. The ISMF rules for ski mountaineering race equipment are no different with the added challenge that they are likely translated from another language. I find that the most effective way at interpreting the intent of these rules is to see examples of improved installations.

One such example is bindings. The rules state:

"which allow heel movement during ascents and are blocked for descents; they may or may not be equipped with security straps. The Binding-System must have a lateral and a front complete release system (the boot is completely separate from the ski). The lateral release (front part) has to be lockable manually without tool. If a Binding is TÜV certified, the locking mechanism is not necessary."

Some manufacturers updated their bindings with a detent between the two modes (locking for climbing, and unlocking for safe skiing) so that the bindings could be placed into a releasing mode. This particular dynafit does not have that, rather the toe lever floats and is preloaded to the autolocking mode with a torsion spring. You can rotate the toe lever back into its unlocked mode, but it will flip back to lock as soon as you release it.

So the older dynafit low tech autolocking bindings are apparently still legal. Just make sure you get a  pair with the added reinforcement around the mounting holes.
Does skimo.co have these newer versions with the reinforced holes?
http://skimo.co/dynafit-low-tech-race-bindings
Posted by Edmonton Ski-mo at 8:57 AM No comments:

While I commute on my bike year round, I am continuously entertained yet simultaneously afraid of the moves that drivers pull to save a minute on their everyday commutes. It's like they don't understand statistics. Through one's career (250 days/year over 40 years) one will work 10,000 days. That's 20,000 commutes. Even if your driving is 99.99 percent safe, you can still expect to crash twice over your career!

Cyclists get ragged on for not stopping at yield signs and not signalling. I can count multiple instances of drivers rolling through stop signs, speeding, distracted driving, not signalling (unsafe lane changes) on my commute each day. Here are some other gems I see while riding:

The U-Turn: What's so special about a U-turn? They are common and described in driver training manuals. These people aren't lost. They are rushed and at intersections with lights (illegal) to avoid having to wait in a long line of traffic.

The "Second Right Turning Lane": Lineup for the regular right turning lane too long? Why not just go all the way up to the intersection in the adjacent lane and make your right turn there?

Parking lot or residential street shortcut: If you are driving on residential streets or parking lots you should be within 2 minutes of your destination or just starting driving. So I'm not sure I understand why there are drivers ripping through! You aren't going to make up any time here...unless you need to bypass a busy section of arterial road! There are now 4 speedbumps and a traffic circle for drivers to navigate through in my neighbourhood. Traffic calming.

The "Hurry up and wait": Rolling stop signs, dangerous or close passes, passing while turning or merging, pedal to the floor accelerations...only to have to wait at the next set of lights or stop sign. Was it worth it?
Posted by Edmonton Ski-mo at 12:41 PM No comments:

Isothermal snow in January? Just another day in Fernie! Once again, conditions were spiced up with a rain crust before the 2nd annual Fernie Lizard Skinner. Things weren't as spicy as last year and the steep groomed climbs offered a little more traction, and skiing down the Diamondback run was not as miserable, except for some grabby alders. The course was even more of a groomer drag race this year with a short skintrack in the trees near the top of the 1st and 2nd climbs was removed with the course instead sticking to the groomed run. I don't mind the lap format.


I felt great. I took the lead going pretty hard, but not "chasing Eric and Nick and then paying for it on the last climb" hard. It was a similar tactic as last year, but this year it worked as I was able to ski to victory. For those of you reading since the very beginning, this is my first "Canada Cup" victory as my only other victories have come at smaller night races (Vert 180, Tiki Torch Dash) and a race in the States (Whitefish Whiteout). Things are starting to come together in time for world championships next month.

Like at the Castle Cat road, I looked back at my GPS file for a comparison