It is hard not to get caught up in the gram counting, whether it be through the suspect manufacturer's weight ratings compared on skintrack.com , or the even more obsessive compulsive postage scale weighing and confirmation of every component.

My Elan Everest setup is LIGHT. 800gram skis, 175 gram bindings, and the 1100gram versatile TLT 5 boot. But I'm spending all of this time and money training for Europe, might as well splurge on some lighter gear with the side effect of having a backup setup for when something breaks.


So overall, I'm estimating about 400gram weight savings per foot.

A big thank-you to Jeff Colvin for organizing the group buy, and to Dynafit for giving us Canucks such a great deal. I can hardly wait to get this setup mounted and to run up some hills.

Posted by Edmonton Ski-mo at 11:48 AM No comments:

The Pass is now closed, and with it goes road access to 2200m. It was a great early season but now I must look for other places to ski. I tried to make the most of the last week of it being open, well at least until the winds had taken their toll. 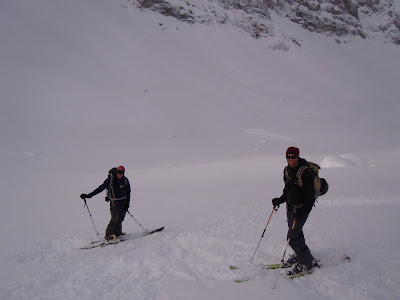 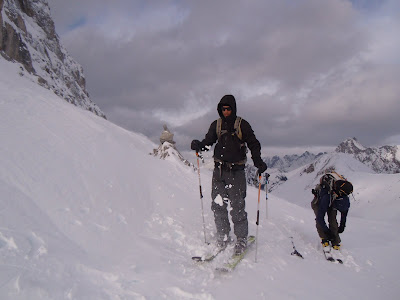 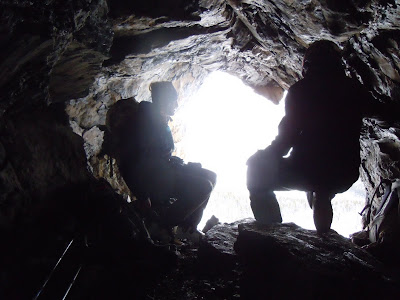 And just like that, the gate went down. After the Vert180, The Canadian Skimountaineering Team had their training camp planned at the Asulkan Cabin near Rogers Pass. Setting out with big, heavy packs (okay, maybe that was just mine), we made our way up to the treeline where the cabin was situated.

It was fun to catch up with the other team members: Stano, Brad, Carla, Steve, and Reiner. The wind howled hard during the nights, and it snowed the whole time, forcing us to skiing powder laps in the tree triangle below the hut. Hard life. I set my all time vertical record on the second day, then broke it again on the third day. We lapped the hell out of the slope, but it kept getting refilled. I had my birthday up there, and even brought up a flask of Royal Reserve to commemorate the occassion.

We skied out on the 4th day, after enjoying a couple of laps of the most volatile blower powder yet that week with snow regularly hitting the face(still not as deep as Field last year :P ). Amazing couple of days with good people, good food, and good times. I really enjoyed the cozy cabin. Thanks to the ACC for hooking us up with the cabin, and to Dynafit got hooking us up with inexpensive, light gear!

"I guess I'm not in Kananaskis anymore".

Posted by Edmonton Ski-mo at 6:32 PM No comments:

3rd year for this wonderful event that brings the ski mountaineering competition to the masses. There was a great turnout of people ready to challenge themselves to see how fast they could go, or how much they could climb. I had a great time being encouraged/encouranging skiers as I passed them/they passed me.

Without the bootpack section, the race was a straight up drag race then a straightline descent

With the great early season that we have been having out here, I have been able to get out a lot and even get up high with some bootpacking thrown in there. I was feeling strong, and while I think that my change-overs needed a little bit of work, I was happy with my performance, finishing 4th overall. Every year, this race seems less difficult, maybe I am pacing better, though I went really hard on lap 1. 2nd place slipped out of my grasp, so I have something to work on.

Marg was out there moving fast.  MT teamed up with Ryan sending some fast lap times, and MT pushing himself, feeling good the whole time.

A big shout out to the organizers and the sponsors for doing such a good job to help expand the reach of the sport! 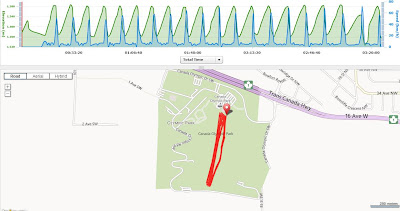 and I uploaded my activity to STRAVA cycling, and created a couple of segments:
http://app.strava.com/activities/30592321#

Posted by Edmonton Ski-mo at 9:59 AM No comments:

November continues to give.

When it's good, you got to get out, lest you succumb to the FOMO (fear of missing out). Morning missions before manning the SkimoCanada table at the MEC Snowfest were not out of question. 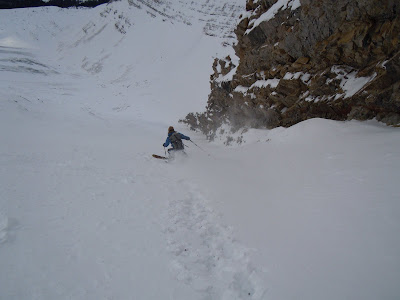 Then the skies opened up. Kananaskis Country Public Safety was predicting huge snowfalls that really did not show up on other forecasts (Snow-forecast, Environment Canada, The Weather Network). Even leaving town at noon left me with 1 driving lane and unplowed parking lots. Barely salvaged that day. 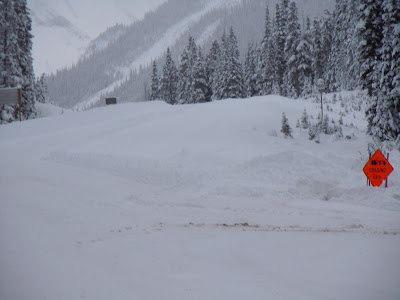 After a busy weekend at work due to some Black Friday thingamajig, I finally got to rekindly my love with this zone.


Gate closes Friday night. Gotta get out there, while trying to not ruin my legs for the Vert180 on Saturday!

Posted by Edmonton Ski-mo at 9:32 PM No comments:

and it still is! 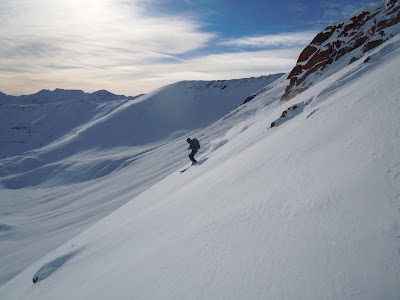 Although the wind is starting to wreak havoc on ski quality and stability, we have still managed to get out and up high before what I'm sure will be a couple of months of being confined to the trees.

Posted by Edmonton Ski-mo at 4:28 PM No comments:

After my last update, the rain, the snow and the falling temperatures had me down. The weather stabilized, and it was time to go skiing. 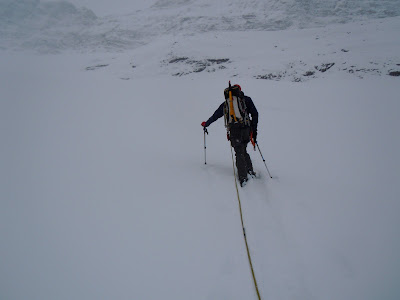 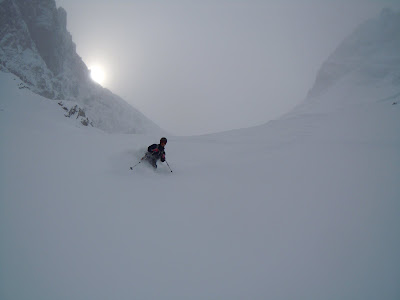 But that didn't mean that I had to stop riding! 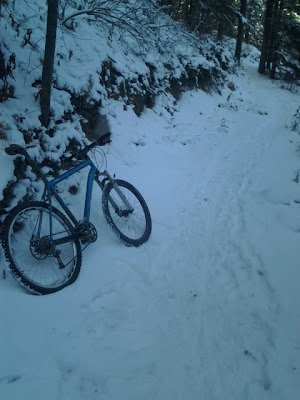 
But due to the wonders of elevation, 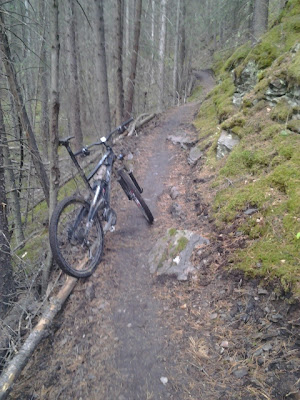 And BOOM. Life is sick. Skiing powder up high, riding dry trails down low. Is November the new May?

And now, introducing a series of stoke that I hope to be putting together this year. Documenting not only my journey to World Championships, but life in Canmore.

Posted by Edmonton Ski-mo at 8:21 PM No comments:

It's probably time to start moving on...

I tried my best to squeeze some riding into the last bit of fall we had left. September left me with an awesome high and I was feeling at the top of my game. Sections that had troubled me a couple of months earlier passed by without even elevating my heart rate. I knew it was coming, freezing in my hammock in the morning in the Cataract Area was an indication that I should probably stick to doing daytrips from home. But I had some new objectives, and I was able to dial in a couple of technical trails. 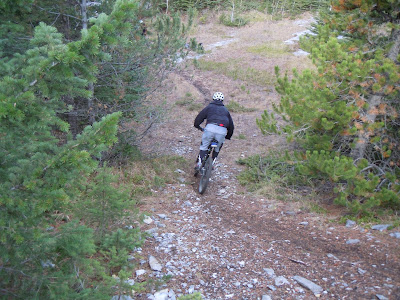 I just came back from what was supposed to be an easy road ride to Banff and back. There was snow on the ground and the roads were wet, but I was enjoying it. Then the wet snow started to come down, and I started to freeze. I had to pin it back from Banff to stay warm and so I could get home faster. 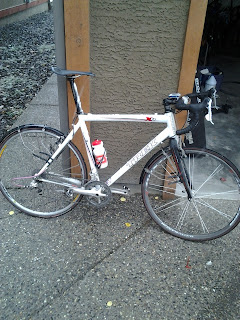 Posted by Edmonton Ski-mo at 6:31 PM No comments: 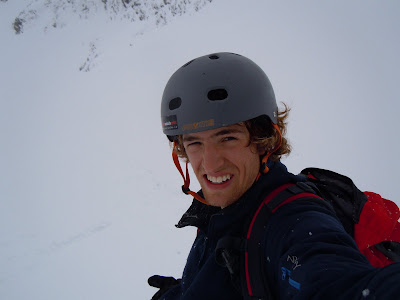 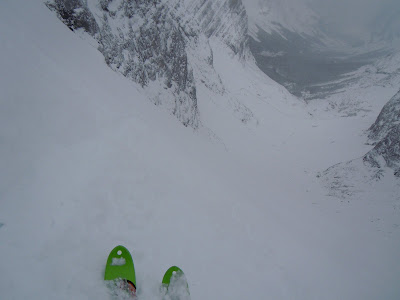 Posted by Edmonton Ski-mo at 7:04 PM No comments:

The "hit list" that I have developed for biking is fairly extensive. A long break from work gave me a chance to check out a couple of items on that hit list that are in a similar area. With snow in the forecast, it seemed like it was either now, or next season before my tires would touch those trails.

A summer's worth of fitness allowed me to hatch an ambitious plan to ride the 4 trails I had heard great things about over the 2 days. I was riding solo, but fortunately, I had a topo map as a companion to battle any internal power struggle. 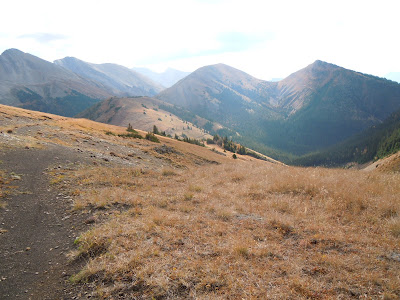 The first ride was a bit of a bust. Eventually the exploration road petered out and left me with some off trail hiking to get to the ridgetop. Ride #2 was a greater priority for me so I pulled the plug and enjoyed a pretty good descent down the trail that I had climbed.

Ride #2 didn't start off so hot. I was "just riding along" when a rock struck my rear derailleur and sent it into the spokes. It knocked my shifting off, but fortunately by almost exactly 1 index.
A hellish creek washout formed by the 1995 floods had taken out the first chunk of the trail and forced me to walk up through the rocks. Soon, I was walking up the trail. 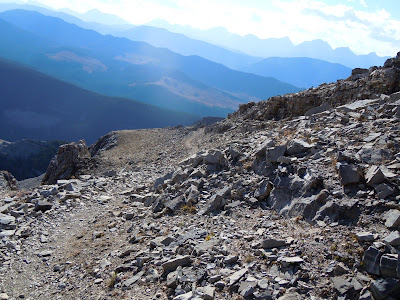 This ride down was awesome, but it still does not equal a similar experience from earlier this year. The descent featured a benched rock sidehill 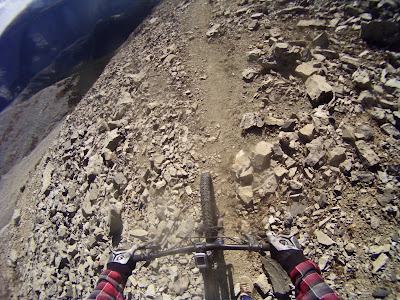 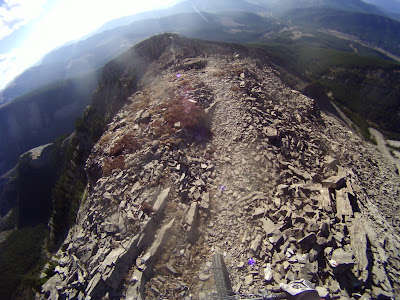 and some steep rock and slabs before heading into the fun trail through the forest. 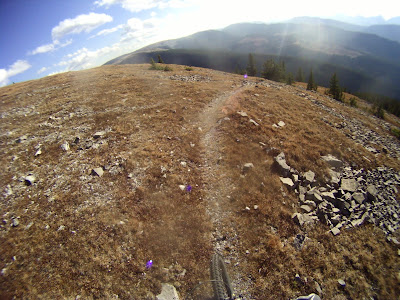 And then back down the creek.

The goal for the evening was to set up my hammock and I enjoyed looking up at the full moon with a clear sky during breaks in my comfortable sleep, although some clouds in the morning were a little threatening (fortunately I had a tent set up as well). It was cold in the morning, but I had to get a start on ride #3 (hinted in one of the previous pictures.

An enjoyable trail on a reclaimed road (think smooth singletrack that seemed to meander from where either "wheel" of the road was) led to the base of a steep trail, although I could have continued up the road for a less steep but longer climb.


The descent was steep and rocky, with a couple of sections that forced me to get off my bike and walk down.
Ride #4 was the "Queen Stage" of the trip, potentially the longest trail but apparently it held some gems on the descent. The approach was on an interesting logging road, filled with steep climbs and descents instead of contouring natural features, and multiple shallow fords. Closer to the pass, the trail weaves with the Great Divide Trail, the latter offering more technical challenges on the way down, but making for frustrating climbing. Near the pass, the road turned to loose rock and would have forced me off my bike, requiring me to walk the rest of the way to the pass. Feeling "far out there" and by myself, I opted to turn around, so that I could be back home for dinnertime to mend my shattered character after 4 challenging rides.

The GDT had some pretty technical sections that forced me to walk, but I was quickly back on the main trail and was able to make quick work back to the trailhead with a slight downhill almost making me wish I had gone to the top...almost. It was neat to explore a new area, but solo exploration in an area rarely frequented by mountain bikers is tough. Deadfall, being bear aware, and a general lack of information made this trip mentally draining for a solo rider.
Posted by Edmonton Ski-mo at 8:33 PM No comments: