I had a fun ride with Mike and Mike (Blender and Sarns), and found some new trails to make part 2. Part 3 possibly coming.
Posted by Edmonton Ski-mo at 5:52 PM No comments:

What I've been up to

School has taken an iron grip (well actually an Incoloy 925 grip) on my life lately, but I have been trying to squeeze out some goodness.

Although I had to take a week off due to sickness and writing a lab report, I was feeling good in a revived Wednesday night cross session thanks to Mark at http://www.hardcorebikes.ca/ for getting that going again! I dominated the start sprints just like the old days. I've still got it! I decided to race provincials in Devon.

The winner of the holeshot got some stuff from Slime, so I used my Wednesday night start skills and took that prime! It was also nice being a half lap into the race and still sitting in 4th. The legs were stiff from not getting a great warmup and not riding hard the day before (and probably from a week of inactivity and being sick), so I eventually faded to 11th.

The school cycle continues, so I have been trying to get out when I can:

Posted by Edmonton Ski-mo at 4:04 PM No comments:

So like last year, I raced the cross race on the Saturday, then headed down to Canmore to meet up with Bill.

Like last year, the race also went well, for a while, I had 5th place in my sights, but I faded a little, and had a really good mental battle to hold on to 7th place. It must have been the new skinsuit! I got a bit of a sore throat on Friday night though, so my breathing was not optimal. 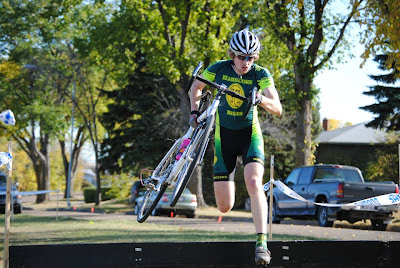 yeah, I might need to learn how to bunny hop...
Photo: Gord Brenner
In Canmore, I was pumped to see Bill who came from Kelowna and my grandparents who came from Victoria for the weekend. Sunday, Bill and I headed to Moose Mountain, just like last year! It had snowed up high and rained hard down low during the week, but things had apparently tacked up nicely in the last couple of days.
We set our sights on a ride up Pneuma, and a descent down SHAFT, a newly cut trail. SHAFT was a little greasy in places (the fun kind of greasy), but the berms were awesome and the trail had good flow! After having a fun rip down SHAFT, we headed up to the top of Ushoulda, which was another fun rip, fast, natural, and flowy! I was feeling sick, the legs were tired, and we had to get home for some turkey, so we cut er short.
Monday, my voice was totally gone, and so a ride was out of the question. Then I was super busy with school during the week (lab report, group project stuff). I think it's the first time in university that I haven't had time to ride!
Posted by Edmonton Ski-mo at 9:37 PM No comments: