The Coldsmoke Powderfest really lived up to its name this year! After enjoying refills the day before and worrying about morning road conditions all night, we arrived up at Whitewater, ready to race, with something like 20cm of new snow overnight. With an early start, everyone knew that the skintracks wouldn't quite be in.

Course: Due to poor visibility and heavy snow the day before, the last section of the course was different than last year, but I think the descents were every bit as good as they were last year. The skintrack was quite deep, and so it wasn't really possible to put much force on the poles. The track was still quite soft; on some ascents the leaders had to break trail or follow a downtrack. The soft track also made traction an issue. The last uptrack was a mix of steep and flat, and seemed really long. Overall, fun descents, some deep skiing!

Engine: I was feeling really good today, held back off the start, but still sitting good, got owned on the skating section, but settled in quickly on the big climb. I skied pretty steady, and was able to push the pace when people were closing in on the last climb.

Technique: I definitely need to work on my skating, or wax my skis better. My skiing was pretty good, and I was able to keep a lookout for course checkpoints. My kickturns were pretty dialed, I think I only messed up 2, and I definitely worked to minimize slipping backwards which REALLY drains energy. Transitions were a little slow, and that is the difference between being able to ski away from someone or getting stuck behind them. I crashed twice early into the race doing a somersault into deep snow. 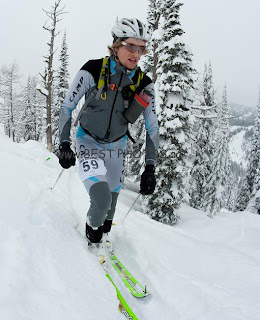 Lots of snow in my helmet from some earlier tumbles. Some pictures from Best Photos

Gear: Gear was solid today, and I had my secret weapon on the last climb which really saved some energy on the steep sections, but forced me to push it on the flatter sections.

TSN Turning Point: I was battling hard, but some smart heads up skiing and my secret weapon on the last climb saved me some energy and I managed to sneak onto the podium, not far behind Stano and McNab who had to do some trailbreaking.

My time was 40mins longer than last year, reflecting the deep snow and the added climb at the end. The deep snow really kept the pack together, the really fast guys were slowed down by having to break trail, while those further back benefited from a solid track. People on larger but still fairly light skis did well too as they could ski the descents faster, and had less slipping issues on the uptracks.

Congrats to Two Scoop Craig on his first race, barely making the 3hr time cut to the top of the 2nd last climb, but pumped to race more when his lighter gear comes in. Bill was smart enough to enjoy the pow day before heading home to Kelowna via Greyhound after a solid reading break (did he take the fingerbang bench?). I got the big skis out in the afternoon, lift lines were long (busiest day in history?), but found some fresh lines, though we didn't get nearly enough laps on the Glory chair :( . At the end of the day, we were trapped up at WH2O as an accident blocked the road. 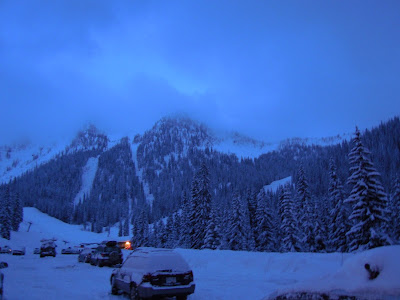 Finally out at 6:30 after some SOLID people watching

Kootenay Pass was closed for avalanche control on Sunday morning, so our long drive back was made even longer, but just as beautiful, by taking the ferry across Kootenay lake. 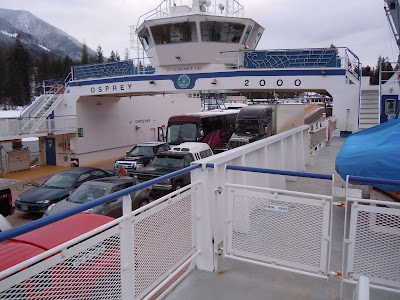 Posted by Edmonton Ski-mo at 4:40 PM No comments: 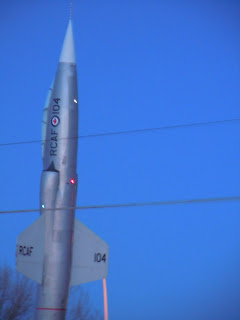 CF104 Starfighter (aka widowmaker), one of my favourites

The weeks before reading week were filled with dilemna: Do I want the "green light" conditions that have resulted from weeks of high pressure? Or do I want to ski some powder that will possibly fall on some very slippery surfaces?

Well I got a bit of both! Some snowfall before the weekend kept us off steeper terrain, but not out of the alpine.
Green light: 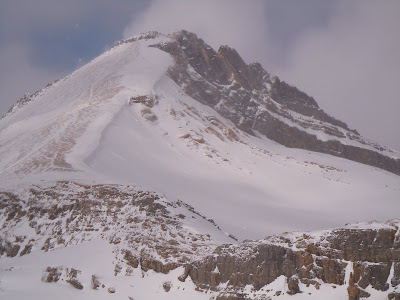 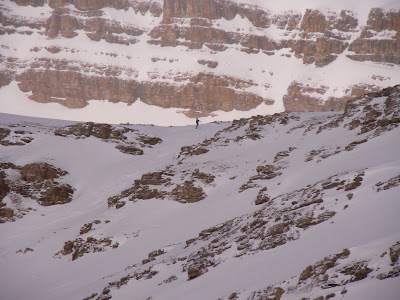 The "light" started to turn yellower the next day as trace snow at trailhead turned out to be 20cm+ of low density blower after 5km of road skinning. Low visibility kept us out of the alpine but some of the deepest turns of my life were enjoyed below treeline. My face and chest got cold from all the snow hitting it on the way down! Not much slabbing up yet, and very minimal sloughing on the buried surface hoar. Unreal! 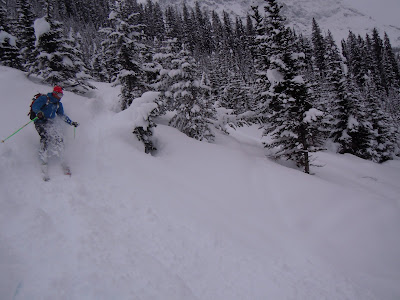 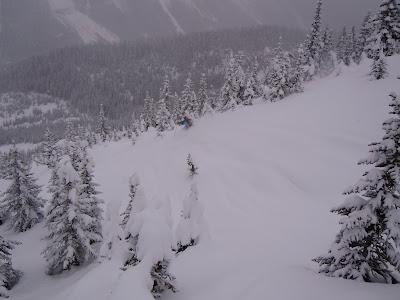 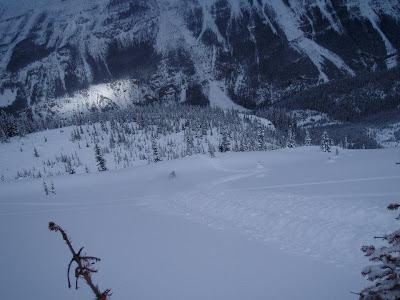 those aren't tracks, they are trenches.

With more snow and wind, the light started to turn orange. We found that the snow was bonding well to the suncrust where we were, but apparently things were getting touchier. 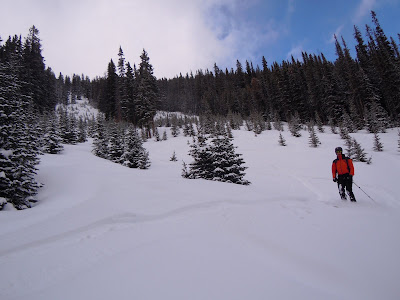 After 5 days, I was averaging over 1000m of vert per day, and it was probably time to taper off for the ROAM race on the weekend. 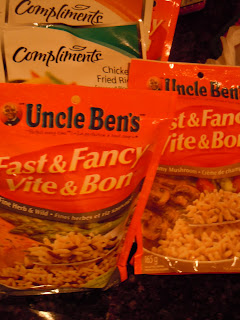 We went for a quick tiptoe around Kootenay pass on our way down, restraining ourselves to lower angled terrain around the ridgetops with numerous recent size 2's and 3's on various aspects in the Cornice bowl in view. 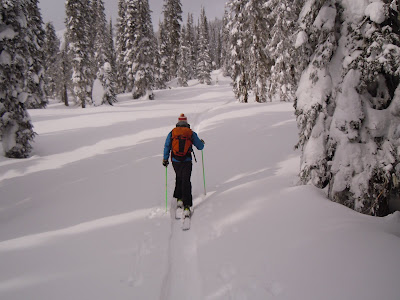 One of my favourite ways to get the legs going before a race is to go skiing! Only 2cm overnight, but it started snowing heavily during the day, and we enjoyed refills on the some fun terrain in the Glory area at Whitewater (down to both the Summit and Glory chairs). Coverage was bomber, so it was fun to slay spines and steep rollovers (something you shouldn't do in the backcountry). 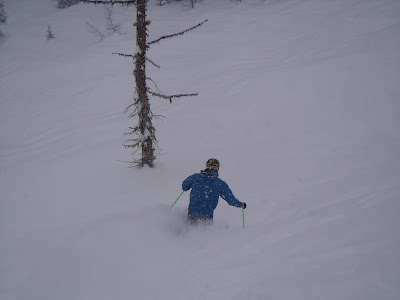 The roads in Nelson were quite slick and I had a couple of zesty slides, but Bill claimed it with a steep hillclimb while someone else was sliding backwards.
Posted by Edmonton Ski-mo at 4:19 PM No comments:

Last weekend was the Dogtooth Dash went down, and boy was it a good time. It was my 3rd Dash, and the Dash is always special because it was my very first race. 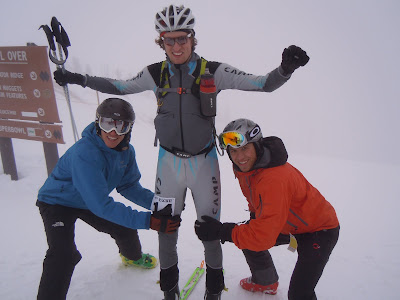 Engine: I was sick all week, but still persevered through the race, and I really didn't notice that I was sick while racing, but I was coughing pretty good afterwards. I was feeling pretty good, but I had finished a water bottle by the bottom of the last climb, and had to go my reserve bottle to fend off the cramps. There were some solid battles today, and I think this was one of my best races. I was crushing the bootpacks pretty hard. Solid battles, cool to see that the sport is gaining popularity = more motivation to train harder! 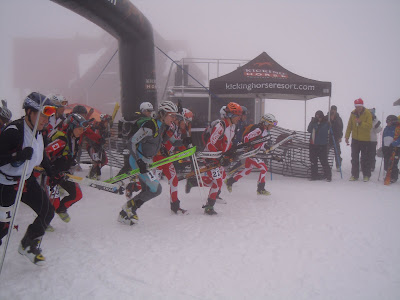 Gear: No issues today, I reglued the tails of my skins before the race and I carried a backup set in my pack. My setup was dialed. 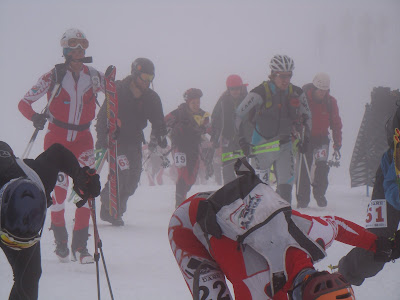 Technique: It took me a while to dial in my transitions today, but because I was battling the whole time, it forced me to improve my transitions, even late in the race. My skiing was a little slow, I would lose time to some people, gain time on others. I could use some more days of ripping around ski resorts on my big skis. 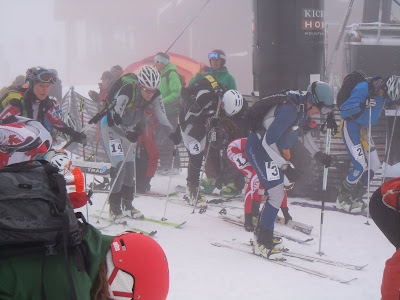 Course: This course is awesome: Airy bootpacks, perfectly angled skintracks and fun descents. I am told that it is very "Euro" style, so I am actually pretty pumped to head over there. It was an awesome course in terms of experience, and it also makes a perfect race course. 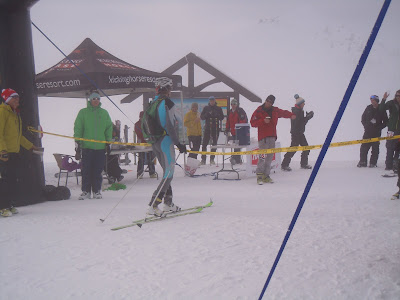 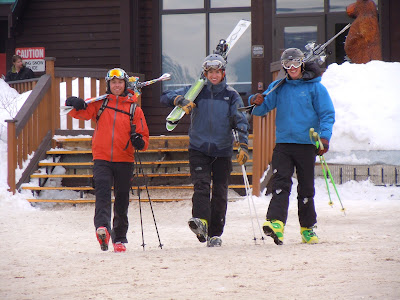 TSN Turning Point: I was locked in a pretty big battle with 5 other skiers for most of the race, but with 3rd place in reach at the bottom of the last climb, I just was not mentally ready to finish off the battle. Everyone is suffering at that point!

So I think I can pick up a couple of minutes by dialing in my skiing and my transitions.

Everyone involved did an awesome job organizing for the race. Every year, Ian Gale and everyone at Kicking Horse offer an experience that is unrivaled. Bill was regretting that he didn't help out with volunteering as he missed out on some great swag and heckling opportunities.

After crushing the Mexican buffet pretty hard, I enjoyed the relay the next day. Bill and I wore our best plaid flannel and denim (Edmonton Tuxedo?). 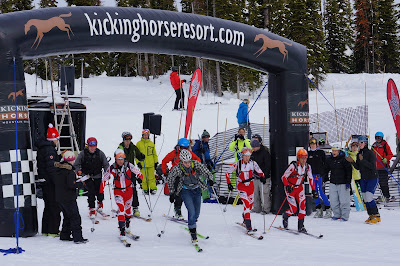 I started really fast, blew up, then settled in on my first lap of the short course. I paced better on my second lap. We finished 3rd and collected some awesome Hammer Nutrition swag.

Skipping class to analyze lift coefficient of backwards spinning spherical objects, the biomechanics of throwing, and ventilation techniques for  buildings containing 5000+ people, each expelling an average of 5ml of CO2/s. 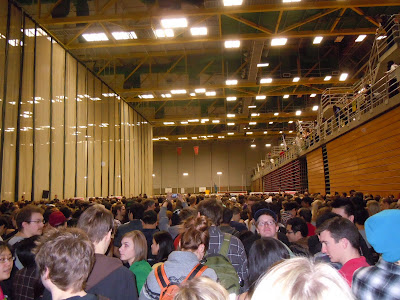 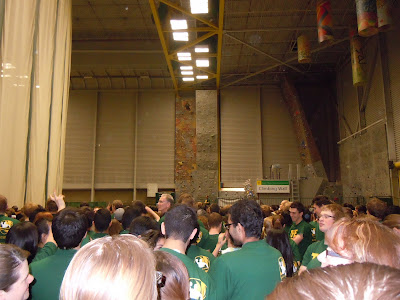 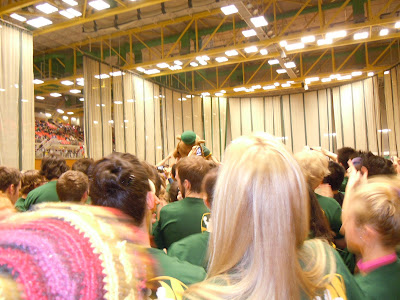 Another highlight was being packed in tight with the kind of girls you just don't get in mechanical engineering... 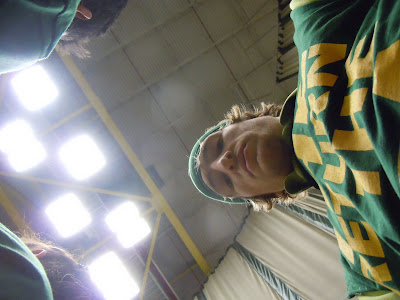 The sleeves of my T-shirt were instantly ripped off to make a buff, wristband, and of course a wifebeater. 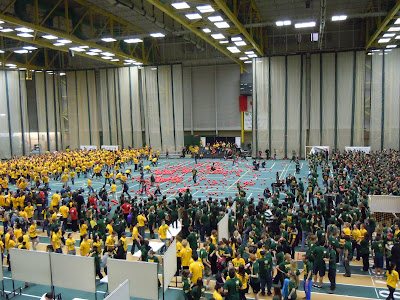 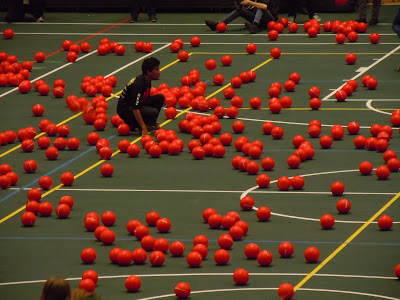 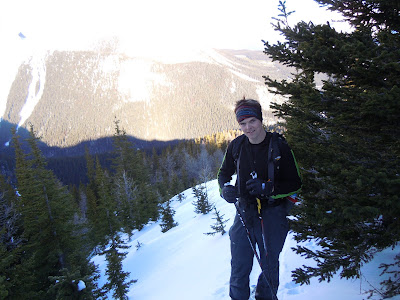 Saturday went touring with Graeme, who is fairly keen. Did some exploring and got some decent turns but we had to leave early. Home at the optimum time for beers on the deck. 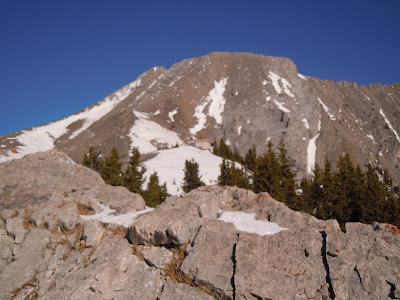 Sunday, I was kindof stranded in Canmore without a car (okay more like not wanting to pay $80 to ski ice moguls). I decided to go up Mt. Lady MacDonald. Started from my house on bike, then climbed up the icy trail until I lost it a little bit before the teahouse. The descent was interesting. I was feeling fit though, so that is good! 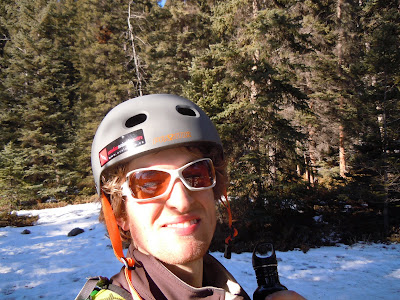 Riding through Canmore on a bike with ski poles rigged to it, and wearing my ridiculously stylish eyewear, I was getting some funny looks. But I wear spandex suits in the capital of oil country; I clearly could not be giving less of a f***.

So what is with the fail? Well first of all, I got sick. Secondly, I forgot that my friends from the UofA outdoor club were at Castle Mountain Hostel for the weekend, and when I got home on Sunday night, I was very jealous of their pictures. Just the way she goes sometimes...
Posted by Edmonton Ski-mo at 8:49 PM No comments:

I'm no climate scientist and I don't have a great grasp of the data supporting global warming but...

Infrared temperature measurement systems are known to be thrown off by greenhouse gases (H20, CO2), as the gases absorb energy.

Anyways, I find that people (usually those who benefit from production of fossil fuels) are skeptical of global warming theories, but they neglect to think of the dangers of SOx's and NOx's emitted to the atmosphere with the burning of fossil fuels.

http://autobus.cyclingnews.com/mtb.php?id=mtb/2007/sep07/olympictest07
Look at all of those DNF's. Clearly the poor air quality had a negative effect on performance. I even remember reading a story about Todd Wells having to take a s*** in the middle of the race! Remember a couple of years ago when smoke from forest fires was so thick you could barely see through it? My airways were pretty irritated after only 2 days of exposure, and I got very sick.

I've heard we still have another 50 or so years of oil dependence, but I don't see why everyone gets so butthurt when asked to reduce consumption.