Ah Stava. Even the mention of that word can bring up debates about suspected poor trail etiquette of its users. Segment speeds are used as fodder for anti-bike advocates. But it's a heck of a good training tool.

You need ideal conditions: Strava leaderboards list people's personal bests. There might be asterisks for weight classes or age groups (for premium users), but it doesn't give a shit if you got your best time against the wind, in the mud, or on a busy night. Road bike segment leaderboards will be packed with people on slick road tires (not mountain bikes), often riding in a group to share the workload, and with a tailwind. So don't go hunting solo, into the wind, on your mountain bike. Conversely for mountain bike trails, you're going to want tacky trail conditions, no fallen trees, and you should ride the trail when it is not busy so you won't have to slow down or stop for other riders using the trail.

Know your segment: It doesn't hurt to preride your segment to find the fastest lines, how to pace yourself, or study online where it starts and finishes. Some segments are poorly made with non intuitive starts and finishes or based off poor GPS traces, but those are the cards you have to deal with. Don't be a loser and make your own segment.

Don't hunt at the very beginning of the ride: Not only are you not warmed up yet, but your GPS likely hasn't had enough time to really lock in on the satellites. You might be able to put in a good time, but it won't count if your GPS trace is out to lunch.

Experiment with entering and exiting trails from different directions: These might be ways to trick your GPS track into giving you a head start or an early finish line. At the very least, you'll find a way that lets you carry speed in and out of the trail. Don't start hunting from the entrance of the trail, or stop right at the end of the trail.

Average wattage: For road segments, you can look at average wattage of your previous attempts to make sure that you don't blow up early or leave too much in the tank.

Be smooth: Some of my best times happened when it felt like I held up a little on the throttle and rode more smooth and controlled. I paced better so I could give it more gas at the end without giving up too much at the beginning.

Some mountain bike segments are too close to roads and it's hard to compete with road bikes as you weave through singletrack alongside the road. Sometimes the trail has been rerouted, making it almost impossible to beat the previous times.

Posted by Edmonton Ski-mo at 8:37 AM No comments:

Possibly if you are looking to get into the sport, or are Canadian! And I'm not even talking about carbon.

When I purchased my first full brand new setup, the dollar was at par. The Canadian dollar is now at $0.76US, so gear ordered from the States (or imported by a distributor...from the States) is now 30% more expensive!

Online skimo gear shopping is as good as it has ever been in North America thanks to Skimo.co, and backcountry.com's continued supplying of race stuff. Cripplecreek.com still looks to have a solid offering as well. But I can't help but notice that the box stores with probably the biggest exposure: MEC and REI have pared down their skimo offerings (edit, MEC is offering the Salomon Minim for $550. This is the deal of the century!). Boulder Nordic sport looks to have gotten out of the game. CampSaver too? Certainly these shops have had enough of skimo gear collecting dust in the back before getting snapped up during end of season clearance sales.

The gear is highly specialized, but it hurts that what is essentially a stripped down (less material, less parts) boot like the Alien or the PDG sells for at least $100 more than a comparable TLT6/7/F1 Evo style boot. Blame lower quantities, less competition, and the fact that racers will pay anything for a weight advantage.
There's a history of weight weenie skiers paying ridiculous amounts of money for minimal weight savings. For years Dynafit sold exotic titanium(or the aluminum alloy Titanal?) toe pieces on $700 bindings with something like a 30g per binding weight savings over the toe piece on a $350 binding. And there are certainly lots of recreational ski tourers who give up adjustable release and cheaper bindings to ski on low tech style bindings; extra granola bars lying in the bottom of their backpack be damned!

I'd think that a pairing of a low-tech race heelpiece (not the sketchy, non lateral release Expedition model) with a standard run of the mill steel TLT Speed toepiece, something that would retail for $385US, weighing only 60g per ski more than the $800US Low Tech Race would fly off the shelves. Fortunately it is possible to build this setup part by part on skimo.co, though it comes out to $430US. And I certainly see enough people skiing Dynafit's 2nd tier PDG ski and boot setup to justify this offering.

On a related skimo note, on the eve of a season with updated helmet regulations, it is certainly alarming to see that the Camp Pulse and Mammut Alpine Rider helmets (I was able to snag a display model at a nearby Atmosphere store) have been discontinued and the $190 Salomon MTN lab is the only helmet available. Supposedly there is a less expensive Salomon helmet and a Dynafit helmet on the way, but things have definitely gone up from my previous $90 Edelrid Shield2.

New rules are requiring skimo racers to use 3 antenna beacons. In response to this, Pieps has come out with the 150g Micro beacon.  $400 to save 65 grams over a BCA Tracker 3 with greater functionality (so still pretty much a race-only beacon). Hilarious when you consider that the current generation of backpacks from CAMP, Dynafit, Ultimate Direction, etc give up at least that much weight to my CAMP XLP 290 that I bought in 2010.
Posted by Edmonton Ski-mo at 12:10 PM No comments:

Might as well use this SLR that's been collecting dust (on the sensor too :( ) for the last 8 years 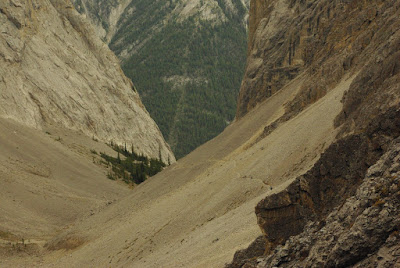 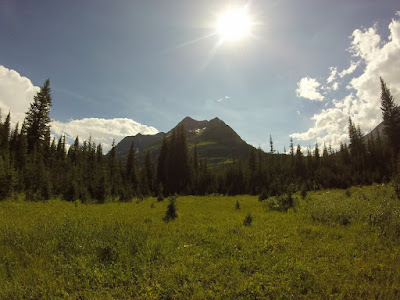 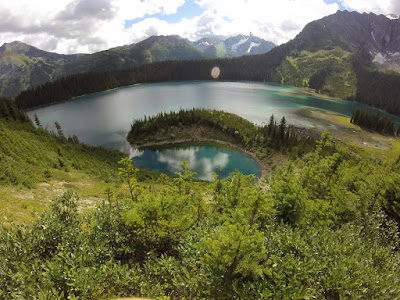 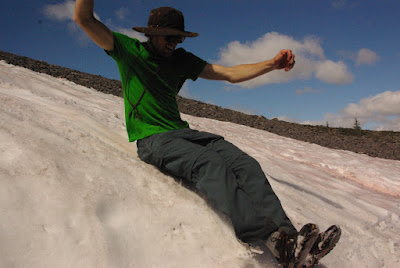 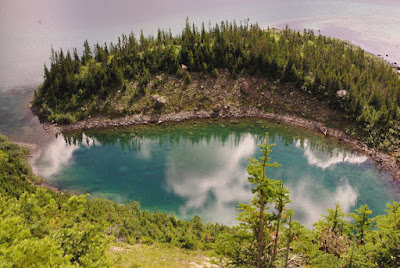 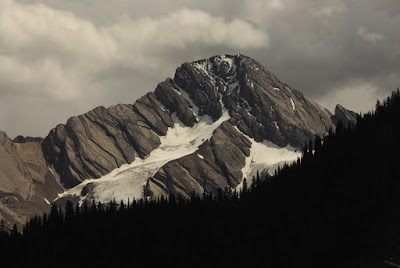 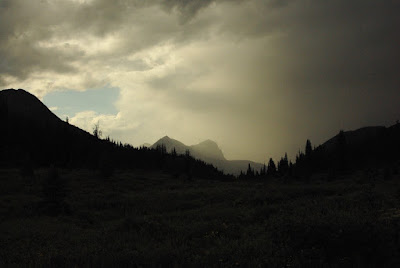 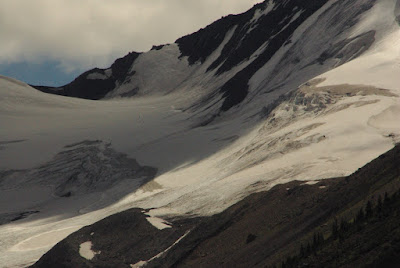 Posted by Edmonton Ski-mo at 7:32 PM No comments: 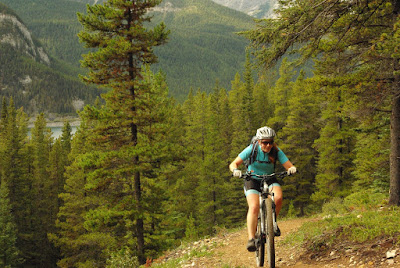 Undulating flow. The climbs are never long, yet the descents stretch on with very little braking required. The trail is also wide enough to make passing easier on this 2-way trail. 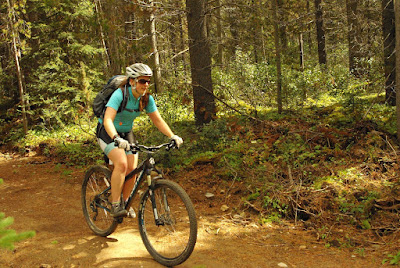 Welcome to the nug zone. The trail works it's way through a boulder field on its southern end. But no worries, the trail tread is still buttery smooth. 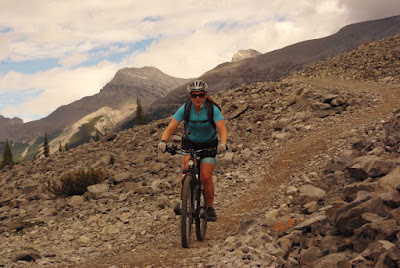 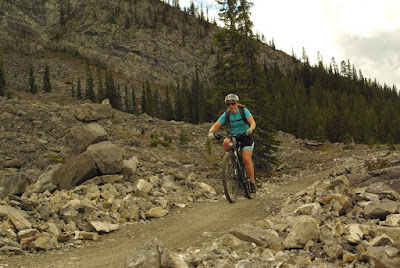 A pretty solid ride from Canmore and back. That's for sure!
Posted by Edmonton Ski-mo at 7:21 PM No comments:

I put this on my top 5 races list for this year, and I may have inadvertently convinced a couple of people to sign up, there was no backing out now. Not even a suspect weather forecast?

The final running of the 100km point to point mountain bike race. Quite the endeavor for the organizers, especially mixed in with a long weekend of running and cycling races. I was eager to return after having to miss out on the 2015 edition due to injury, but nervous staring down the barrel of 100km and 3000m of climbing off road. 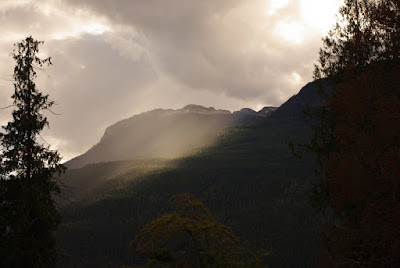 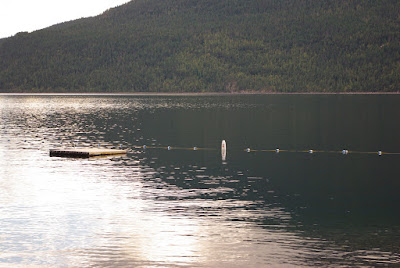 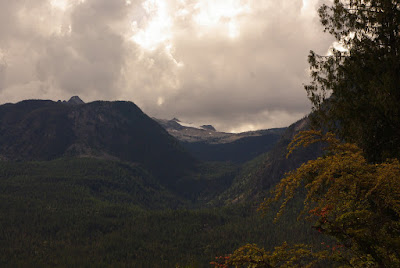 A great race. I was able to beat my time from 2014. I had forgotten how hard the beginning of the race is through the True Blue area. The final descent down the Alamo trail is a big one, a real brake burner!

Posted by Edmonton Ski-mo at 7:10 PM No comments: