Eager to get after it after a week of getting antsy as reports of big lines getting skied poured in. With warm temps and sunny skies, early starts were a must, so the clock was set to 0420 each morning. As much as it sucks waking up that early, I didn't mind once I got going. It was also nice to be done before noon, leaving plenty of time for other activities. Pole position every day on a long weekend has to be worth something: 3x2000= 6000 GNAR points 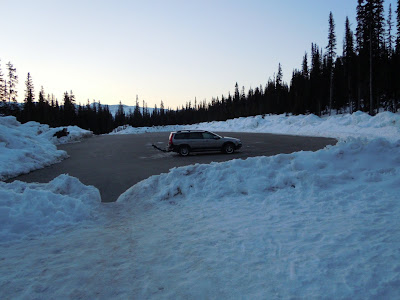 NW face of Mt. Chester on rental gear, that is how we roll. Any suggestions for axe/crampons (comment below?)? 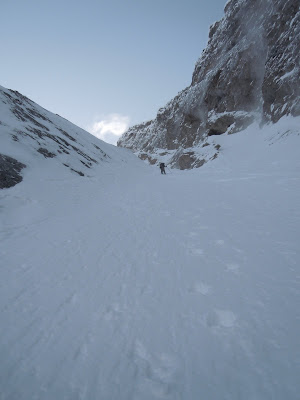 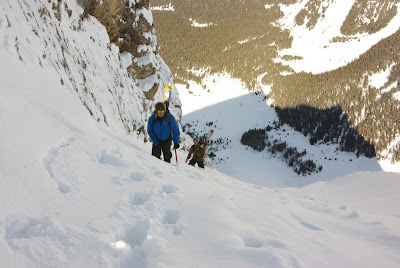 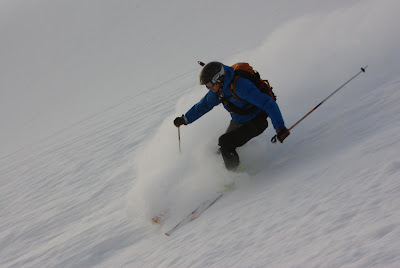 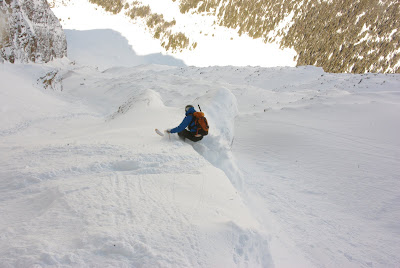 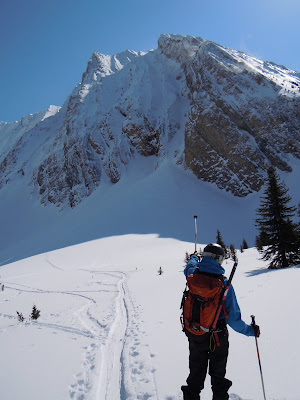 Interesting dilemna: About 1hr on our way up the chute, we noticed a group of 2 starting to skin up the apron. We figured we would have to wait for them at the top so that we would not sluff them out. We were in no hurry so we didn't mind waiting, but I would imagine there are plenty of scenarios where this could be a problem: what if we were linking this up with some other lines and/or had to beat warming/sunset or had other time committments? comments?
Ultimately, it turned out to be a couple who run a local shop. Maybe we should ask for some discounts for our patience :)...
Miner's, super skied out, nice to tick it off 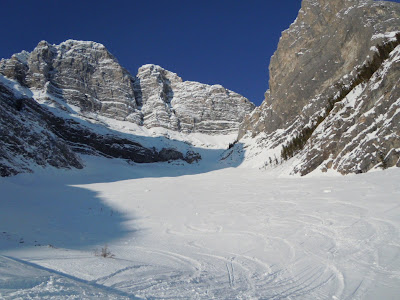 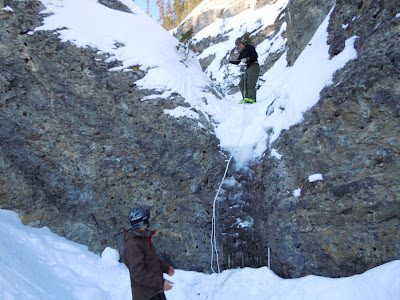 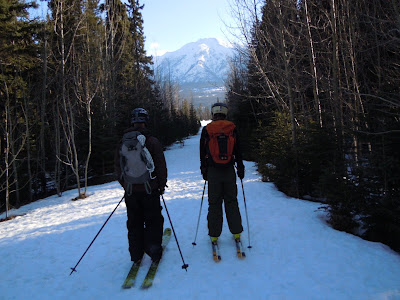 The highline trail access to Quarry Lake was super fun. Surprise pass on Sunday, for an "easier" day, but we didn't get to pose with some asian tourists. Some good apron skiing on all 3 days
Posted by Edmonton Ski-mo at 8:35 PM No comments:

Winter doesn't seem to want to give up and I may as well be getting after it! A couple of road rides and then BAM more snow. No point in fighting it. 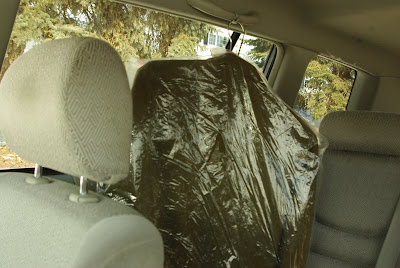 I must be getting old 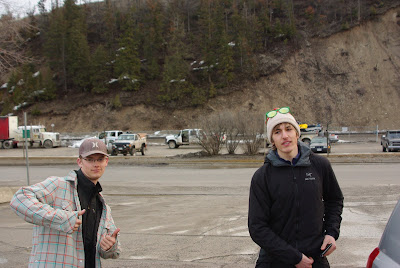 There was an awesome truck/snowmobile setup. It was funny at the time
Now some stuff from the weekend 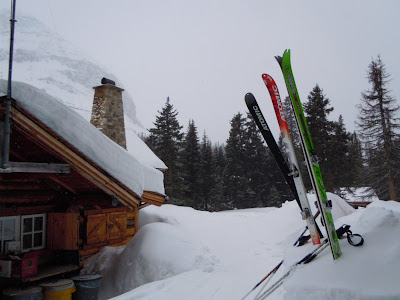 Out and back Skoki with SS. Quite the slog for maybe 4 turns, but an awesome workout! I need to learn how to skate!

Headed out with MT on Sunday 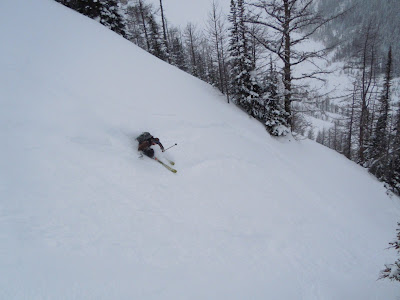 We may have skied this 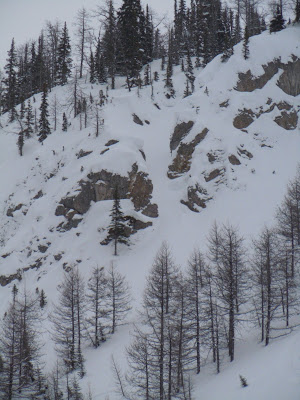 My "weight training" touring setup. No "waiting" for my friends! 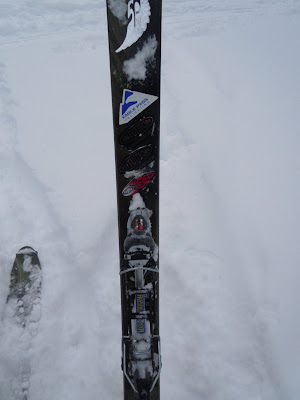 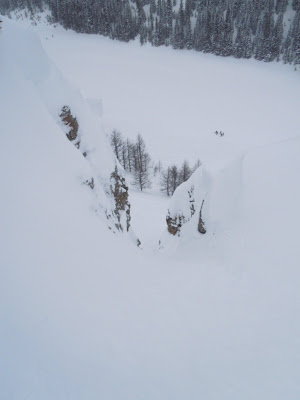 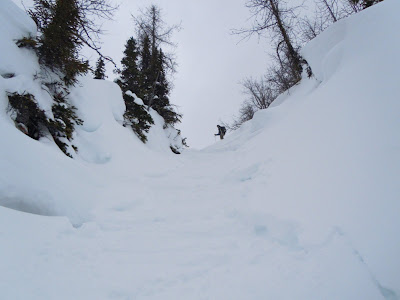 Posted by Edmonton Ski-mo at 9:23 PM No comments:

I’m not going to lie, I was like “WTF is Ken Jones”. Turns out he was a guide at Skoki Lodge back in the day. The history of ski mountaineering in the rockies is fascinating!

The last race of the Canadian Calendar was at Lake Louise on Saturday. The visibility wasn't great, but the snow was good, and I think I had my best race yet. Rocked the hostel the night before the race so we wouldn't have to drive early in the morning. A couple of fast guys were away, but I battled hard and finished 3rd.

Course: 3 long ascents and descents on this course. The descents were awesome! F-gully in Whitehorn II, Speed Gully on Richardson's Ridge, and finally Elevator Shaft to Rock Garden. There was a really loooooonnnngg bootpack section to Richardson's Ridge that wasn't too bad, until the slight downhill wallowing section. Lots of skating on The Skiout to the finish. Climbing up Purple Bowl was cool! The course utilized some of the slackcountry areas of Lake Louise that I have wanted to explore.

Gear: Gear was perfect again today. Only real issue was that I did not know the ascents that well and didn't optimise the use of my fast or my grippy skins.

Engine: The engine really shined today. I went hard, and didn't fade significantly, though I guess the last ascent was not very steep so that helped. 4 clif bloks, 1 bottle of gatorade, and part of a can of Monster from the feed zone! The feed zone definitely helped, but maybe I will carry some Coke with me to get me to the end of races that do not have feed zones. I find that works well for me, provided I have not bonked already!

Technique: Jeff Colvin put on a descending and change-over clinic. That's all I can say...

TSN Turning Point: Not a major turning point, but a positive one. Downing some Monster at the feed zone before the long final climb. I caught and passed Jeff Colvin (who passed me and put some time into me on Speed Gully) and held him and Steve Sellers off until the finish, and didn't finish too far behind Ian Gale, Mel Bernier. 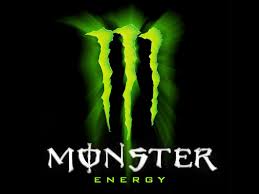 I'm pretty pumped that I didn't blow up considering that this race was the longest of the year. Switched to the burly setup and got some good (but tired) turns in the afternoon. Still some inbounds areas I want to tick off in this phat year: ER5 couloir, I-gully

Got next year's race setup all mounted up. Not only can MT take sick photos, he can also ski tech, and pre-view courses for me!
Posted by Edmonton Ski-mo at 9:41 PM No comments:

I'm sure some of you are wondering what I am doing skiing (and climbing up mountains) on kid's skis in a 1 piece lycra suit, and a bike helmet (or climbing helmet). It is ski mountaineering racing (or skimo for short, or rando racing), and it is all about moving fast through the mountains. It requires a full-on effort, usually for over 2hrs, so in a way it is similar to mountain bike racing. 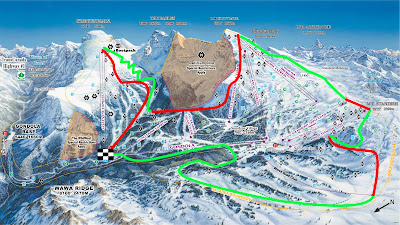 The courses are usually 5000+ vertical feet with multiple ascents and descents, and the occassional bootpack section to spice things up. Good fitness is important, but you need to be able to suffer, and still be able to ski when your legs are fried.

Most of the race is spent climbing, so the gear is (stupid) light. The skis are short and narrow and the boots are not very stiff, but it is remarkable how versatile this gear is. The courses utilize expert terrain, and it is also fun to blow by the recreational skiers on the descents.

The races were a little longer than I was used to, so I did "run out of gas" occassionally, and I had to haul my carcass to the finish. I was always pumped when I reached the finish though! The racing is hard. For some, you have to sacrifice to race, but I found that I was more motivated to train: to ski tour, because of upcoming races!

I didn't ride my bike very much this winter season, but with all of the snow in Edmonton, I think I picked the right season to try racing! I put in more volume in than I used to though because I was motivated for racing. I found that I was super pumped to go ski touring, and went ski touring way more than I skied the lifts. I tried to keep the intensity within check as to not spoil my mountain bike season too badly. I am curious how my bike season will turn out.

I've managed to track down some even lighter gear for pretty cheap for next year. Hopefully I can find the time in my final year of school to race and train because I really had fun this winter! Thinking of some midweek e-town sprint skimo races.
Posted by Edmonton Ski-mo at 6:14 PM No comments: