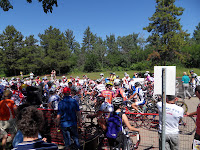 Armed with my Alberta MTB Racing cowbell, I headed down to Hawrelack park in the morning, for what would be a very long, relaxing day outside.

Gave back to the community by volunteering for the women's race in the morning at the top of Emily Murphy hill, which consisted of me sitting in a chair in the shade, ringing my cowbell when the pack went by, and doing my best Bob Roll when answering questions from n00bs. I had a police officer with me who let select cars through and turned back the n00bs who were trying to drive down to the park, so I didn't have to do anything. After enjoying a macchiato from Da Capo, and a sandwich from Fresh Start served by a cute girl, I went out to ride a lap of the course with the full road closure.

Met up with some Hardcore teammates, and watched the men's race. I decided not to race, but I saw some cat 3's and 4's who man'ed up. Within a couple of laps, I could see them falling off the back. I did a couple of cat 2 races last year and got shelled, and the race was as long as the longest ride that I had ever done. After a fairly active first couple of laps, the race lulled, but then I realized that they were only halfway done! Then I saw lots of fast Albertan riders get dropped. Definitely glad I didn't race today!

Pumped to see some Alberta rep. in the break of the day with Spencer able to stick in until the end to claim 14th. Although the pack was whittled down, there was still a select collection of Alberta riders who finished the race. Dom Rollin put on a show for the crowd with an impressive pull but as a strong pro tour rider, he was heavily marked.

Cool race, would be cool to have it in Edmonton next year, I would try to get ready for that. Interesting to hear the opinion of the public on that one! Props to Sheldon Smart for beating Rob Jones to the athlete interviews!
Posted by Edmonton Ski-mo at 4:56 PM No comments: 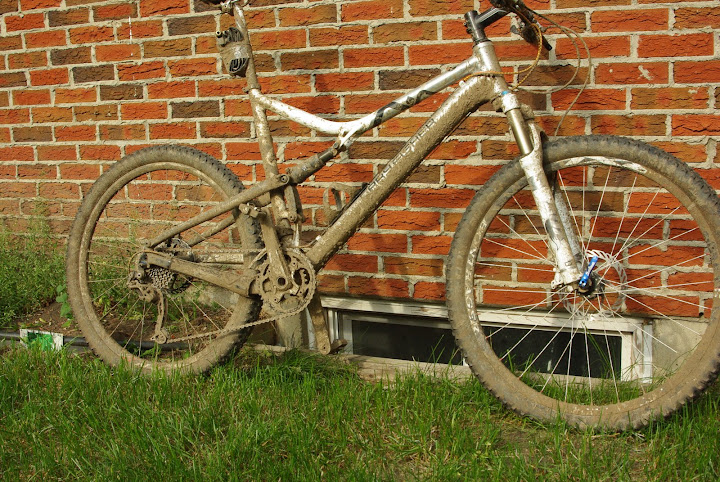 Down to Bragg Creek this week for another Alberta Cup VTT race. I must have been living under a rock because I did not know that it had been monsooning in southern Alberta the whole week. The course was pretty much a river, but fortunately the mud was not very cohesive. Flatted during the preride as I did not have enough Stan`s in my tire (Stan`s WILL be the solution to the BP leak). Didn't get to see the Banff crit as Bill didn't want to go. Bill is a closet suffer enthusiast, he just doesn't want anyone to know about his forbidden love!

Not a huge field, but enough "pack fill" elites (ha I will make some good pack fill when I upgrade). The legs weren't feeling very good at the beginning of the 1st lap (longer/harder warmup req'd.), but I got into the groove quickly. Felix was off the front, and there was another Bow rider within arms' reach. But I am not a great descender, so I lost huge chunks of time on the descent. Rolled in 3rd place with some "competitive" lap times so I am happy. It is no secret that I love the courses with lots of climbing as I find that I can push myself harder.

Lots of draw prizes, and good awards thanks to the organizers; Deadgoat! Nice work Mike, Steve, and Andre on the Hardcore elite sweep!
Posted by Edmonton Ski-mo at 7:31 PM No comments:

Hardcore to the MAX 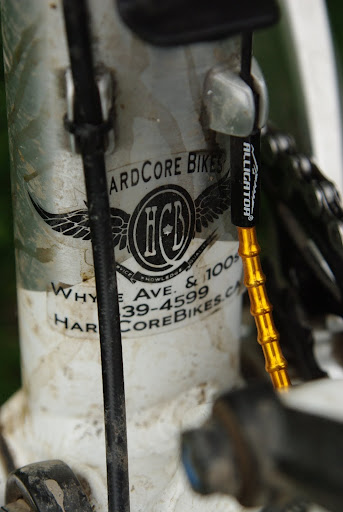 Ever since I joined the Hardcore cycling club last year, my riding has improved greatly. Training rides and other club members motivated me to improve both my technical riding abilities and my fitness, though I still have a ways to go!

"Style coach" Steve Martin's bike setup always seems a couple of years ahead of its time, with the emphasis on smart component selection. When making changes to my bike for the remainder of the season, I did my best to employ some of his ideas: 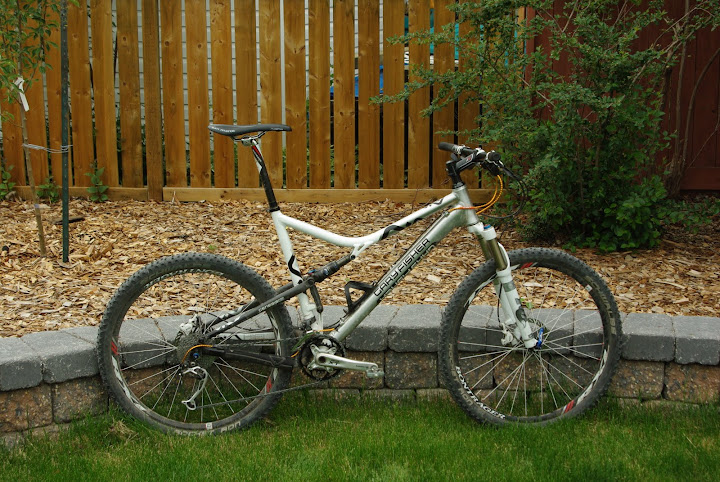 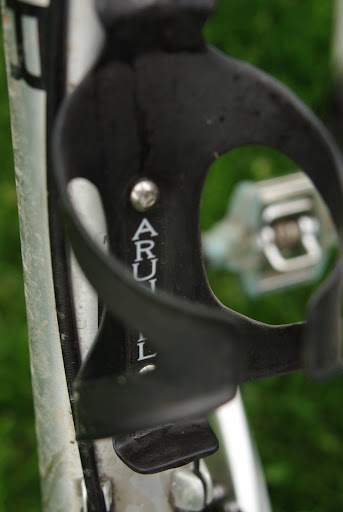 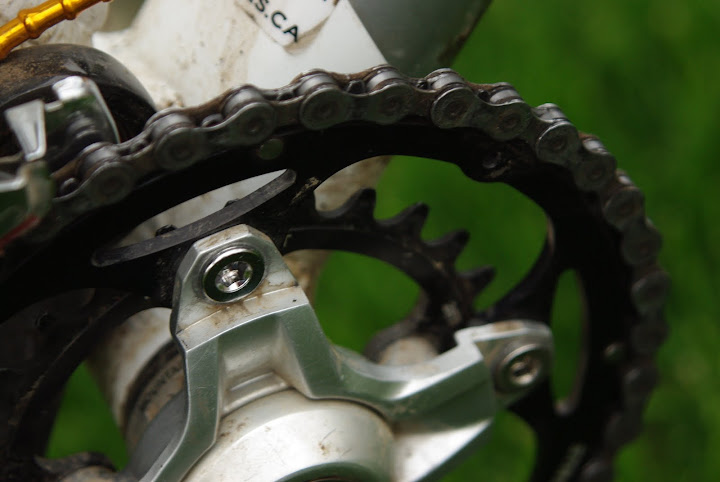 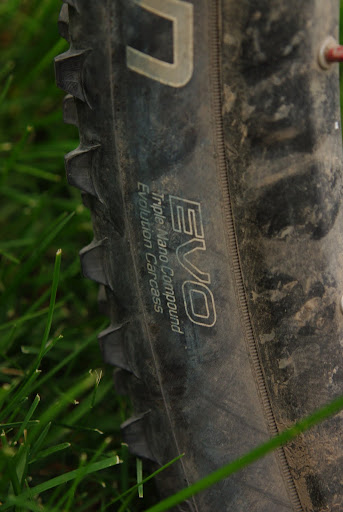 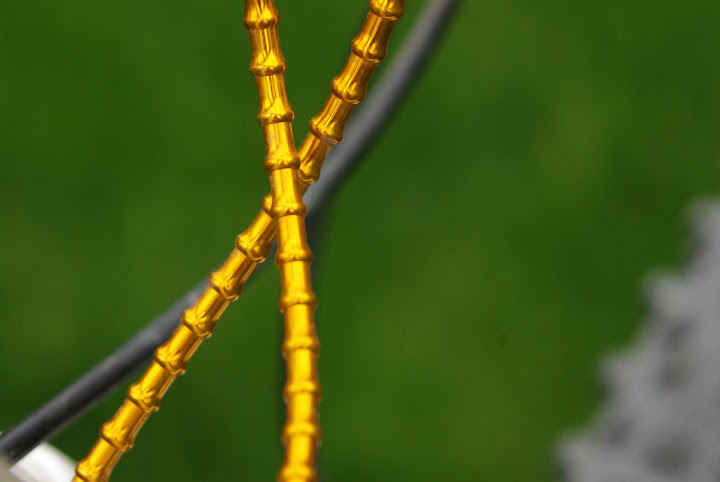 Posted by Edmonton Ski-mo at 8:04 PM No comments:

The weather finally broke, and we headed down to Canmore for another stop on the Alberta Cup. Arriving with little daylight to spare, we set out to pre-ride the brand new race course which was automatically awesome by virtue of being a Canmore nordic centre race course (okay, I agree, you could probably still make a very lame course at the CNC). I knew that the ride would be short, so I hammered hard (probably a little too hard) to loosen up the legs.

After eating an entire 500g package to tortellini, I hit the hay. The next day, we all enjoyed the main benefit that comes with being in the higher categories: later starts. It was hot, so I kept the warmup short. I was incredibly nervous for the start: 50 racers in expert, some Olympians in other sports, I was expecting to do well, but I just had no idea what to think.

I had a really good start, but my descending was weak sauce, so I would get caught, or have to hammer after every descent. I kept the pace hard for the rest of the race with my jaw dropping when I saw that the 2 leaders had already finished before I had even started the lower part of the course on my last lap! I was 6th, but I gave it everything I had and threw down some blistering lap times (calculated with my trusty excel spreadsheet), and that was all I really wanted...

Another relaxing evening in the mountains, then back to the CNC in the morning to go watch some sick twisted individuals (or relay teams) ride for 5hrs, then I sampled some more sweet CNC singletrack!
Posted by Edmonton Ski-mo at 8:43 PM No comments:

With a 2nd place in the Pigeon Lake road race, I have finally accumulated enough points to make it to the elite road level. But first, a little rewind to the previous weekend:

After a nice easy recovery week, I headed down to Canmore to see my brother, and to ride my bike. I am so thankful that my parents were smart enough to buy a house in Canmore, and not some lame lake in central Alberta.

Saturday was spent pimping out my bike (a future post to come). Then a short and muddy ride of the new Highline trail. Sunday was spent riding some trails from past World Cup and Canada Cup courses (late 1990's) at the Canmore Nordic Centre (CNC, home of next weekend's Iron Lung race). The CNC is one of my favourite places to ride as the trails are awesome (rooty, technical, flowy, challenging; now that I know where all the good ones are), and you can ride for as long as you like. It just got a little cold when it started to snow...

Blew up at the Tuesday night race hanging on to the leaders after a very fast first lap (by my standards), but gave the sufferface a good workout to keep my position. The legs were a little fatigued the next day, but not enough to prevent me from "cleaning" the McNally hill for the first time on my 3rd try...now they were really fatigued.

And that brings us to Sunday's road race: A fairly active first lap (out of 4), but it seemed that anytime I even thought about putting down 400+ watts there was someone on my wheel. Probably a combination of my weak sauce attacks, too early into the race, or someone really did not want me to go off the front. Silly riding on my part. Andre had gotten away with a fast group of riders, who I tried to bridge up to, but unfortunately just ended up eating away at the gap...to my teammate! Unfortunately, a strong pull by a strong rider brought back the breakaway.

Toned it down for the next laps, but a breakaway had gotten away while I was chilling at the back. Crunch time and my teammates Josh, Andre, and even Mark buried themselves on the front to bring the break back. Going into the finish, I was not placed very well within the field, and was worried that this would turn into another midpack finish. However, there were a lot of hurting legs in the final uphill sprint, and I donned the sufferface and pedaled squares with my legs starting to cramp to take 2nd place.

My teammates (Andre, Josh, and Mark) did a wonderful job sacrificing their legs to give me a shot at the win and I am very thankful! How will I return the favour? Cat 2 is a huge step up in speed, so I will need some time to upgrade the engine, but I am pumped to be able to pin on the 2 digit numbers that just scream "fast".

Sadly, we were reminded with the unfortunate realities of road racing: there had been huge crashes in the cat 5, and the women's groups leaving numerous broken bikes, and even some broken bodies :( . Healing vibes ++++++, but I wouldn't blame them if they never returned to road racing.
Posted by Edmonton Ski-mo at 6:13 PM No comments: