Muddy. Lots of Running. Wishing I had a singlespeed (less stuff that could break). In awe of the mud on the bikes from the earlier starts. Tonnes of different tires on the start line. 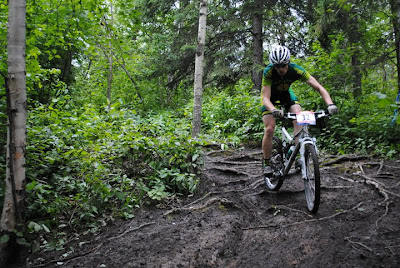 photo: Gord B.
It would be easy for me to shut down on this course in these conditions, and a terrible start, but some good battles kept me in the game. Finished with a decent percentage, didn't get chicked, or passed by too many juniors. Local knowledge definitely helped. Stoked to survive unscathed. 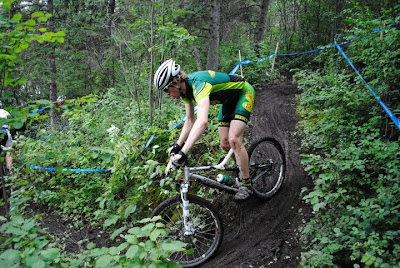 photo: Gord B.
Posted by Edmonton Ski-mo at 5:24 PM No comments:

Meanwhile at my rain and mosquito free secret training base 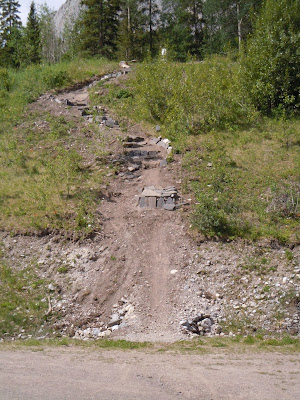 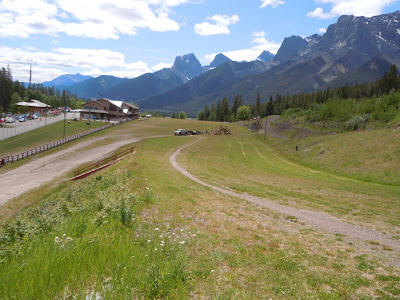 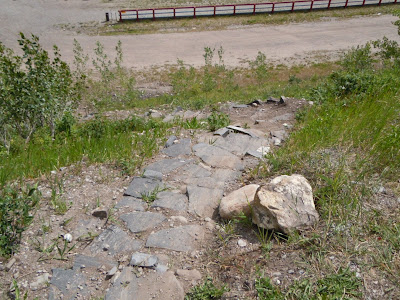 Giving astute readers a look at a potential new descent for the race this weekend. Oh, the Star Wars trail on Tunnel Mountain is like Episode 1 (not that good, except for the pod racing).
Posted by Edmonton Ski-mo at 7:48 PM No comments:

Well since $500 3-day stage races (not including accommodation) that sell out in a couple of hours are not really my thing, I had a free long weekend to do some rad stuff.

Kicked it off with some biking at Kicking Horse 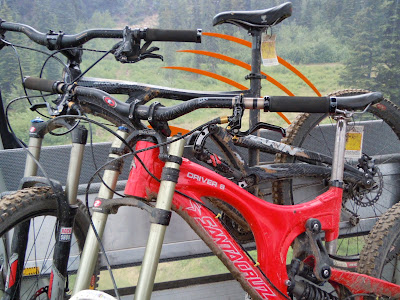 Bill's Driver 8 and my 'Driver 8 junior' aka Marin Attack Trail
The bike was awesome, totally matches my riding style (mostly everything up to small drops: I can get away with a lighter, shorter travel bike). 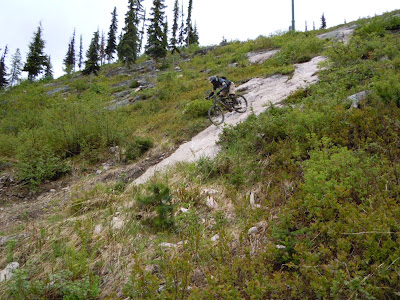 With the right geometry, tires, and even front and rear braking, I tamed Rock 'n Roll 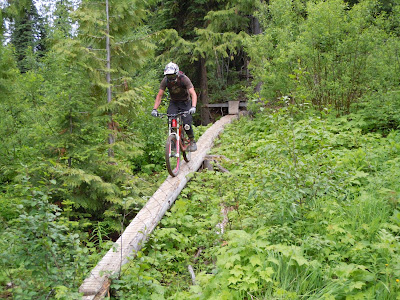 "That's Jedi"
Saturday, I had the stupid idea of trying to ski in July. Mt. Cornwall was the destination (visible from Calgary, just north of Banded Peak). 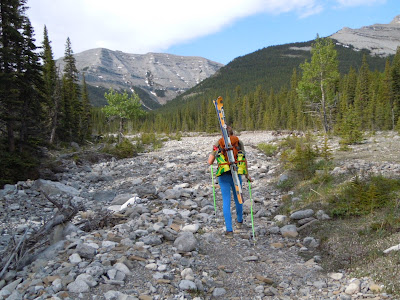 Bill working his way over flood plain rocks, before turning the corner in the distance. "It's like a Warren Miller movie where they go to Africa and hike for a really long time just to ski a tiny snowpatch" 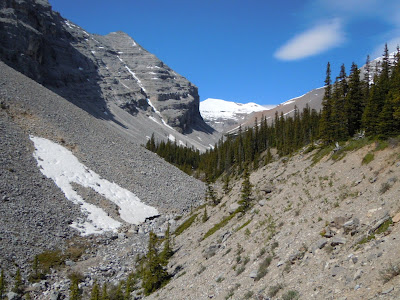 The objective wayyyy off in the distance. Only a couple more hours of bushwacking, rock-hopping, scree bashing, and skinning left! 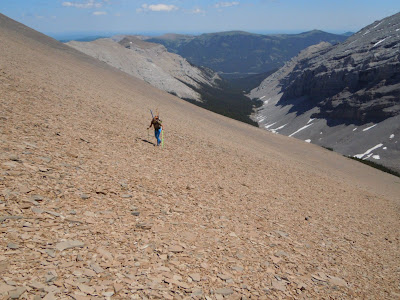 Bill in the scree bashing segment
Then my camera died, but I did make it to the top to ski...all 300m vertical of it trust me! (Well there was a wind loaded gully that got us about another 200m vertical of skiing further down). The skiing was actually not bad (good corn!).  1300m vertical, ~24km round trip of biking, hiking, and skiing. 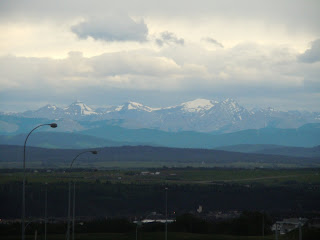 View from Calgary: Mt. Cornwall is just right of centre. If you look closely, you can see our tracks!
But you know what sucked? Bushwacking, rock hopping, scree bashing, up and down the mountain with skis and boots on our backs. This was a long and draining day. Overall, it was not very much fun. I hate walking down hills. I hate bushwacking with skis on my back. I hate carrying a heavy pack.
So I now have a 9 month Alberta skiing streak, but I am not going for 10 or 12. Skiing in the summer requires long approaches for very few turns, and I think I would just rather go mountain biking, though I do know of some summer skiing that could be done very close to a road, if I were in the area...
So after Saturday's character builder we set our sights on a more fun adventure. We set out to look for the trail we couldn't find last weekend. With some more beta obtained from a series of tubes known as the interwebs, we were finally able to find the trailhead (which was very well hidden, let's just say it is fairly obvious that SOMEONE does not want people riding there). The elements were against us as we slid around in the rain and got blown around by the wind, so a lot of walking was done, but we rode the trail. We will return again.
Posted by Edmonton Ski-mo at 6:54 PM No comments: