You are not going out looking like that are you?

Well, less than 1 week until I get to see how fast I can climb/ski 5000ft in this garb:

"Is this some end of season thing? Are you wearing that as a joke?"
"No man, I'm dead serious!"
Posted by Edmonton Ski-mo at 7:04 PM No comments:

"So how is school going"

"So, what have you been up to"

um, not much, just biking (The 4th annual spring of getting shelled on group rides. Hey what doesn't kill you makes you stronger.)

and skiing with some of my friends

Sniped the photos from Shaun King taken back in Febraury.

Ha, most people other than the 5 people who read this blog find me very boring!

Going to Canmore this weekend for some final preparations before the sufferfest that will be the Dogtooth Dash. You stay classy
Posted by Edmonton Ski-mo at 1:25 PM No comments:

Well this whole rando-racing gig seems to be coming together! I have acquired a semi-legit racing setup from my friends:

-Dynafit setup from SRT
-Downhill suit from MT (if it fits haha)
-and of course, pre-race "coach style leg rubdown" thanks to SRT

Euro motivational playlist is in the making

and I have been searching around the house to piece together the lightest and fastest combination of mandatory race gear. Now just a matter of working on the legs and the transitions.
So stoked!

Sunday, with high avalanche danger in the alpine and wanting to do some backcountry skiing, we headed to an area below treeline that did not get as much snow, is on a more stable aspect, and has some trees for support. We were the first ones there since the last 15cm snowfall. Skiing (or sliding after toppling over on the way up) was fast on a buried suncrust that we did occasionally punch through (causing an ejection, as well as some minor instability). 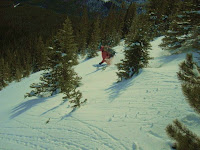 When avalanche conditions are dangerous, it is still possible to ski powder safely...
Posted by Edmonton Ski-mo at 10:11 PM No comments:

Well what was supposed to be a Saturday day trip to KHMR was stopped at Field after a multi semi accident closed the road. We had to rip back to Canmore to collect MT's pass to ski SSV.

Finally got there at around 11 after getting up at 5 and leaving at 6. Didn't want to suffer the loss of dignity by parking up the road so we greased our way into a "vacant" parking spot. Didn't think the Dive would open in the morning, so just hit up some fun areas, slammed some free Amp Energy drinks, snaked some freshies from the "freeride club", and snapped some good photos after getting snaked on a one hit wonder pillow line. Snow was the deepest I have skied at SSV for quite some time!

All was good until we saw skiers whooping it up in the Dive. Quickly got our asses in there to salvage what was left from the morning shit show. Redeemed the poor start to the day with a deep unskied line in my secret stash. SRT tried to convince me to leave that for another run, but I had been snaked already today, so couldn't let that wait another run. Skiing could be described as "All time".

Short on time, we headed up for another lap without lunch, taking full advantage of a lift lineup to do some heckling of the latest in ski "fashion": 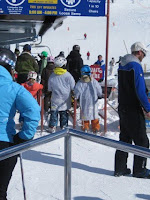 "Hey look...it's a black kid" oops, did I say that out loud? The closest that kid will get to the "ghetto" is his parent's home in a gated community in suburban Calgary.

lap 2 was just "okay" as I did some exploring that didn't lead to anything special. Not enough time for a third lap
Some photos by M "quarter pump" T
, including SRT on his new B Dizzle Megafats (Black Diamond Megawatts)

ski out was a little sketchy as Bill had an incident with a snowboarder...

Apparently, KHMR was incredibly busy. When we found out, we felt a little better about missing out. There's always the tough call to make when playing the numbers: deciding to drive away from fresh snow. Had the highway been open, exposing KHMR to even more people, I would actually have preferred to hit up SSV...if I knew the Dive was going to open!

Moral of the story is ship goods by train, use winter tires, and be careful out there!
Posted by Edmonton Ski-mo at 9:36 PM 1 comment:

The two of you who read my blog may have noticed that I now occupy a corner of cyberspace that is titled under a less (insert politically correct insult here) name.

Well just last week, I learned the hard way that it is probably time to stop mountain biking in the river valley and time to start road biking in the country. Red Bull Crashed Ice on a bike didn't go so well...

First off, racing season gets an early start this year with what are supposed to be a fun spring racing series. Looking forward to testing out the legs

Easter weekend should be a good one. Hopefully get some good snow and good stability, as there are a couple of nice tours I am looking forward to doing.

As well, I have convinced myself to compete in the Dogtooth Dash at KHMR on April 3. Yes I am that sick and twisted that I enjoy hurting myself. I have always wanted to do the Sunshine Rando race in early February, but I always seem to have a metric tonne of schoolwork to do that weekend. My friends make fun of me for climbing too fast and making them hurt, so this should be fun. I want to see how fast I can go, which will be important for the future when first tracks in waist deep blower are on the line.
More info here

Rando racer's are the most hardcore weight weenies you will ever see. They put roadies to shame. They are known for drilling out the cuffs of their already lightweight boots (Swiss cheese), grinding off the stock lugged soles and replacing those with lighter lugged soles, custom machined binding heelpieces, Nordic ski poles, super lightweight skis, and all the latest lightweight goodies. As well, they have many other modifications for making transitions from climbing to skiing faster, and downhill race suits. Me? I'll just be rocking my everyday ski touring setup which was also at one time, my everyday skiing setup, and probably some of my cycling clothing. Yes a bit of a weight penalty for me, but that just means that I have to giv'er on both the uphill and the downhill, and bring some of my racing instincts to the table! It's really big in Europe (like all good sports) and someday this will be an Olympic sport, unless there is uncontrollable Global Warming. Posted by Edmonton Ski-mo at 3:36 PM No comments: