Peter's Tip of the day: When QEII turns into a clusterf***, it is probably a good idea to get as far away (east or west) as possible.

Someone got all butthurt over some misspelled f-bombs, but not the graffiti on the bridge? 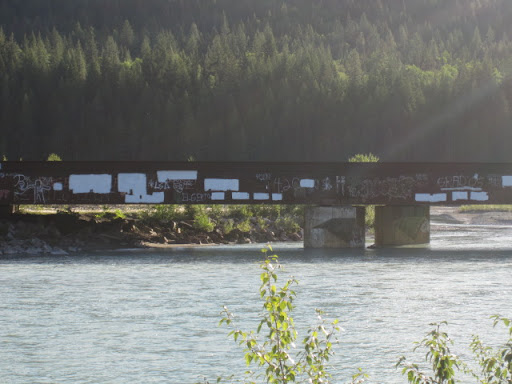 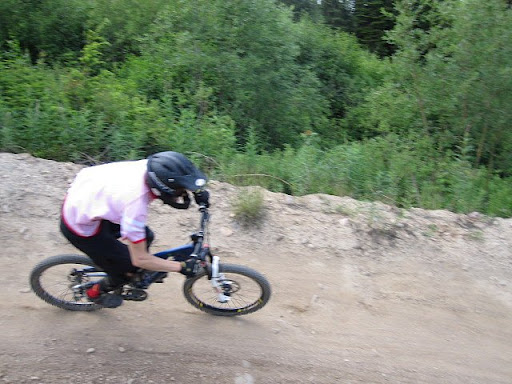 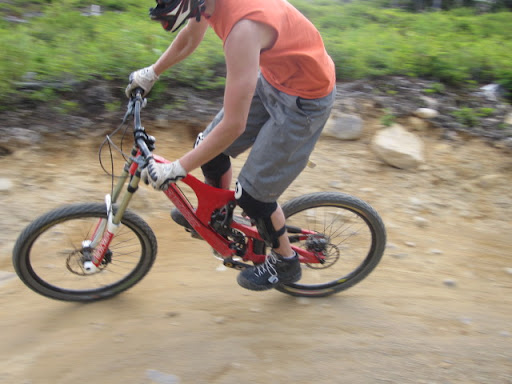 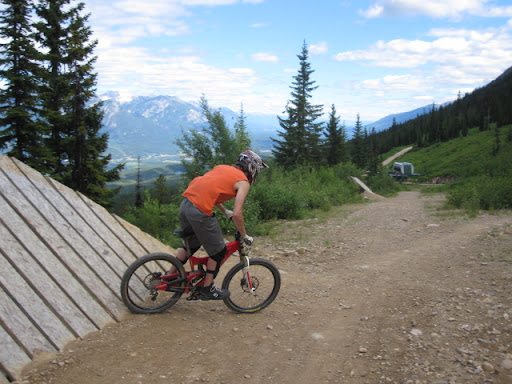 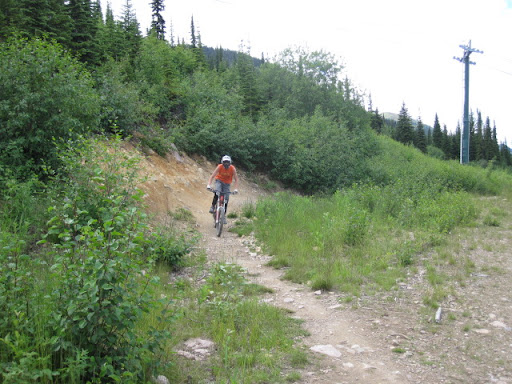 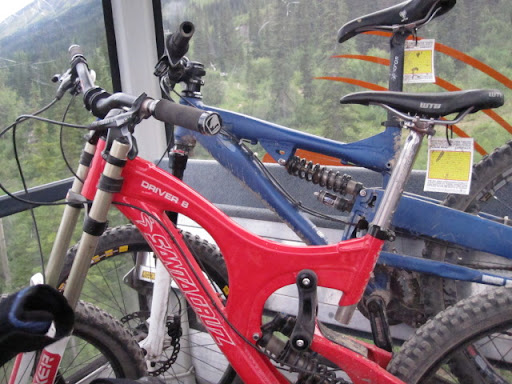 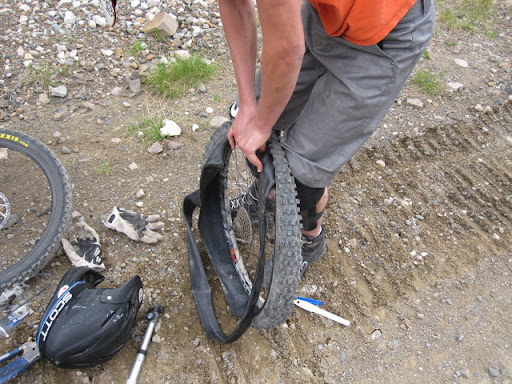 Wow there are a lot of mountain bike "racers" at 24 Hours of Adrenalin. Where did they all come from?
Posted by Edmonton Ski-mo at 3:57 PM No comments: 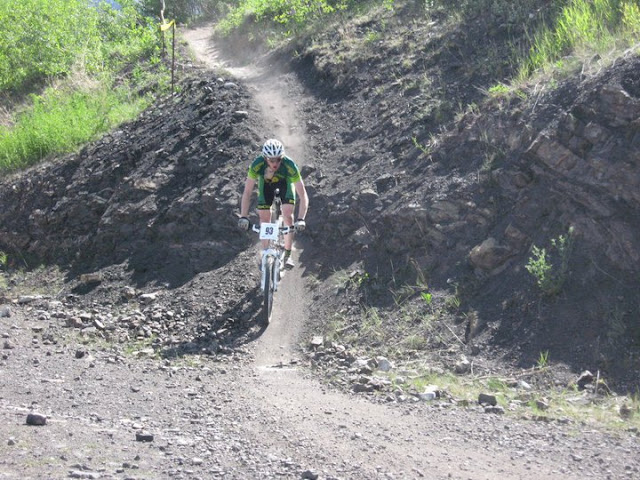 A solid preparation week similar to how I have prepared for major races in the past. Finally, a working heart rate monitor as I mooched parts from Trevor Pombert's old Polar. Headed down to Canmore Thursday evening to allow the legs time to prepare for Sunday's race, pre-ride, and sign on. Speaking of sign on, apparently some riders have people who sign on for them. Must be nice...

It had been haunting me for the last two weeks: Should I jump the double logs on the first descent, "Mad Handler". 2 weeks before, I had gapped them, but had a weird crash on the next corner. Initially, I played it safe and rolled them, but while looping back up the climb, I saw Derek Zandstra gap the logs with ease. I had convinced myself to give it another go and then before I knew it, I was on the ground. Alright, no log hopping for me... The pre-ride pain continued when I tagged my hip on a tree on "Nectar Noodle". Ouch!

While having pre-race dinner at LunaBLUE (food was okay, $$$ and adagietto), Steve called me out for eating pasta, citing that gluten inflames muscles. "Haven't you ever listened to Allen Lim?" Well that set the tone for a weekend of WWALD (what would Allen Lim do) jokes.

Race day, watched some of Le Tour, then some live footage from the woman's elite race, and then headed up to the CNC in time to see the finish. After a solid warmup, I was in the start grid with the clock counting down the 45 second gap for our start (under 23 men) after the Elite men. Oh yeah, some frenchie offered up one beer to whoever won if he did not get lapped. I thought to myself:

yeah right. You are from Quebec; you came all this way to race; you must be fast

The start was not too bad through the start loop, nice and strung out, but I found myself in the back, which turned out to be a problem once 2 CVM riders decided to let a gap go (probably the dude who was worried about getting lapped). I chased back on, and the engine was nice and hot to slay the climb. However, my descending was not up to par as I lost contact with the riders I was with. Settled into laps 2 and 3 nicely, and started to notice the fade in lap 4. Finished lap 4 just before Elite winner, Geoff Kabush came in, phew, I did not get lapped! Lap 5 with the Coke bottle was survival mode to bring it home to the finish. After a solid effort 13 mins back, 16th place, and 5 UCI points (thankfully, not enough to race a World Cup), I was spent.

A few recovery beers helped to ease the pain, but I was still too tired to ride Highline. This year, I have "raced" myself into shape, but all of my MTB races have been just over 90 minutes. But the last 2 races have required at least 120 minutes of racing. When I would usually be "bringing it home" to the finish, I now have to try to avoid getting lapped and then do another lap on top of that! Already looking ahead to next year: by competing in more 2hr + races next year, and improving my descending, I can easily shave more time off my race!

The organizer really took a lot of heat about the course design. It actually seemed to have a nice ebb and flow, and was pretty good, it just did not live up to the Canmore reputation.
Posted by Edmonton Ski-mo at 6:08 PM No comments:

Too fast to be slow, too slow to be fast

Well after a solid weekend of training in Canmore, I was pumped to test out the top end for the final time in the Tuesday race before the big race on the weekend. The legs were still a little dead from the weekend, but I was motivated to suffer hard, and that is what I did. I crashed at the beginning of the 2nd lap and looked down and saw a lot of blood on my left knee. Still finished the race strong! I had to get driven home from the race and headed to emerg. to get 3 stitches.

Wednesday morning woke up at 4 with my knee in excruciating pain, not due to the cut, but because of some bruising. Fortunately, I did not break my patella! The knee set me back pretty much until Saturday, where I put in a solid pre-ride to loosen up the legs without even noticing the bruise.

I was stoked for race day, and feeling pretty good as I rode to Kinsmen, ready to suffer hard. After chilling around the expo area and a warmup, I was called up near the back.

We are off, but on the first climb, there was a bit of a pileup (poor shifting/crash?) and so I had to get off and run. I was in 2nd last and there was another bottleneck on the next hill. The course was in really good condition except for a climb that is now permanently muddy due to a spring. I started picking off some riders, until I reached a Sask. rider (Cory Zet. BCW) who I just could not close the gap too. Some juniors passed me, and then I rode behind Emily Batty for a bit after she "chicked" me. More juniors, then Amanda Sin, dang chicked again. On the 4th lap, I was hurting pretty bad, and was waiting for my final lap Coke bottle to appear in my feeder's (Gary Middleton, thanks!) hands. It didn't come as I was only on my 5th lap, which I suffered some more on. Then I saw Derek Zandstra a little bit behind me, and so I hit the gas as hard as I could. I held him off just as he turned to go through the finish chute, but was pulled from the race. Thanks for putting me out of my misery! I wasn't disappointed as the legs were hurting and I left it all out on the race course. Solid race for me; legs were not quite there.

After the race, checked some results. There were some riders who were not far ahead of me. But almost all the riders I passed had DNF'd, so I was in 2nd last place! For 5 laps, my time was pretty much 2:00:00, which would have placed me well in my usual expert men category, competitive with the master experts; 2 women and a whole bunch of juniors beat me (ignoring tactics, battles, course conditions, etc...), so not too bad.

I've never really dominated the expert category; I've just thrown down some consistent podiums, and started closing the start gap into parts of the elite field. I enjoyed the prestige of racing in a Canada cup category, enjoyed having to deal with less lap traffic, enjoyed having a drier course due to a later start (except for the muddy hill, which only got worse).

How does it compare to last year? Last year with one less lap, I did not get lapped. I didn't see how long after I lapped through for my last lap that Andrew Watson finished last year. I technically just avoided being lapped today doing one more lap with what could be considered a stronger field. I was definitely noticing the home field advantage as I had a lot of the rooty lines dialed in. The only area I sucked on was the rhubarb'y area after the road climb.

Ha the next EMBA project should be to fix up that climb. I would be interested in helping out. As an engineer (not a CivE though) it would be interesting to see the solution. Do you have to bring in granular material, and some pipe to permit draining? Do you use wooden structures to divert the water or the trail? Is the trail a lost cause?
Posted by Edmonton Ski-mo at 8:44 PM No comments:

Learning how to ride

Let me tell you, I was thrilled when I found out that I had a four day weekend. What better way to spend a long weekend shredding with some pals in Canmore?

Driving back and forth to Canmore can get expensive, but JMidds and Wildcat tagged along to split travel costs. Not only did I make the most out of my hard earned Benjamins but I had so much fun riding with such skilled riders!

A sick drive down, and early on, it was decided that the radio would be locked on Top 40. After 4 or so hours of discussing the meaning of life, we arrived at our destination, chamoised up, caffinated, and proceeded to rip some of the newer Canmore singletrack for a couple of hours. An awesome ride, but I found out there that I have a lot of work to do to get faster on the descents. Oh yeah, and we ripped up Soft Yog's (soft yogurt) to the G-out, something that we would do to end all 4 days.

Canada day, and with the fireworks in the park behind the house, we made some s'mores in the firepit, pounded some brews, and played frisbee keep away with some annoying kids. More importantly, I stocked up on some 'rade.

The next day, we rode the course for the upcoming national championships.

A big ride planned for Saturday as we rolled out from the CNC, getting bludgeoned by roots on the way to Banff. After being challenged by both the up and down of the Stoney Squaw trail, we could feel the bonk coming on, so we stopped for some burg's at The Eddie. Delicious!

After our feast, we chilled on the Goat Creek trail back to Canmore, and ripped some technical singletrack back into town.

On our final day, we decided to explore some of the trails on the opposite side of the valley, which led to more fun. The legs were definitely feeling the efforts of the previous 3 days, so a little break was req'd before riding another lap of the course. Part 2 of the ride, we set off with a fast group of XC skiers, collectively known as the "Fort Mac Crew", that is after witnessing the creation of a new hit single (the key to a good hit is good autotune).

XC skiers always seem very fast, and provided me with some good motivation. Fast riders behind me, fast riders in front of me. I crashed pretty hard the corner after gapping some logs, but instead of getting rattled, I was back up and ready to rip!

After a potato cannon "demonstration", we headed home, sad to leave Canmore, but happy with some good riding behind us, slightly improved technical skills (for me at least) and some big races coming up. We missed the closing of the BASS PRO SHOP, which was a little disappointing, but we saw the epicness looking through the windows. 'Till another time...
Posted by Edmonton Ski-mo at 8:43 PM No comments: