Slackcountry biking. As absurd as it sounds, I was thinking about all of the chairlift access mountain bike mountains around here and many of them have a trail that leaves the patrolled boundary. Call it a great way to finish off your day! I don't think many are as long and hard (that's what she said!) as Kicking Horse's (Maybe Khyber Pass in Whistler?).

At first, I was a little angry that the mountain is not too keen on allowing uphill traffic, even after they close for the season. But then I remembered that "The Separatists" had won some gift certificates. What a great way to spend the day: casing some jumps, hitting some stumps, and then cap it off with a hike-a-bike to a super long descent.

The trails were ROUGH, and I was taking quite a beating, I could even start to feel the death grip setting in midway down the first lap! Okay, they are pretty long laps. Getting a lift to the top is fun, getting beaten up: not so much.


Unfortunately, I did not really possess the skill level to really make the most out of the trail, and I did a lot of walking. It's definitely more of a hiking trail, but I could see how a skilled rider could get down some sections. It seemed that every time the trail got fun, that the next section would force me to walk my bike. After quite a character builder, We were finally at the logging road, and able to rip the upper Canyon Creek descent (Lower Sir Donald, LSD). This trail is fun, and a great contrast to the blown out and rough nature of the KHMR trails. Steep sections that were not loose, okay, maybe I should tighten my lips about this trail!

A tough day for sure. The Golden Cycling Club is planning on officially sanctioning the trail with the goal of having a descent from the top of KHMR down to Nicholson. I'm in no position to discuss what that will mean for the nature of the trail, but in its current state, it is best left for the more skilled and adventurous riders looking for a great/challenging way to finish off the day!

The body was sore for a couple of days after. All of those isometric muscle contractions while riding downhill are not something that I normally experience. Fortunately, I was all rested up and ready to race the River Raid XC in Devon on the weekend.

A fast course, mainly consisting of doubletrack, but with some steep singletrack climbs and a tight, but straight descent. I was feeling pretty good and was able to ride the steep climbs every lap with the odd dab or two. I ended up in 4th, just shy of the podium.

Some great riding, and I need a little more rest. I'm itching to get to Revelstoke for some alpine hike-a-bikes to cap the year off properly.

Since my last post about riding, I made a video:
Riding all over the mountain. on Pinkbike

A repeat of last year but with slightly harder access and better weather!

When we did this ride last year, it really set me off on a mission to find some great descents. I'll never be able to ride the gnarly steeps, but I do enjoy a long descent that travels through many vegetation zones. I rode a lot of great trails, but this one stood out for not being too intimidating, taking me through some awesome terrain, and of course, being non stop fun for the whole descent. The 90 year old trail flows well, better than some recently built trails designed with "flow" in mind. Maybe back then, they knew something we didn't!
Posted by Edmonton Ski-mo at 9:13 PM No comments:

The best upgrade you can make to your bike

2 week break from racing + midsummer = alpine riding. The snow is all gone, the infrastructure is recovering from the floods and I have some (more) time to get up high!

Kicked it off with JP-Cox. We love to ride this one up the north access to JP, tag the summit, then over to Cox and down. Great alpine singletrack to ride time ratio and some awesome long descents!

The real capper was heading off to the Columbia Valley and ticking off a couple of remote alpine rides that would surely be classics if they were a little easier to access.

First up was Brewer Creek to Panorama. The ride is well described in Doug Eastcott's Backcountry Biking in the Canadian Rockies guidebook, the Bible for mountain biking around here! The route also served as Stage 1 of the 2008 Trans Walkies, although they travelled the opposite way we had planned. I rode with my brother, my friend Martin, and his buddy, Pierre.

With rumours that the last descent may be a little overgrown, we were a little skeptical, but thankfully we knew there was a way around that as the TR stage entered from a different trail, albeit with some boring gravel road rather than exciting singletrack. Anyways, we set off on the long 25km logging road access, found the road had washed out just before the trailhead (still passable on the bike) and any easy picking parking spots were already occupied by hiker's vehicles. So we parked at the bottom of the last steep hill, by a small bridge.

The trail starts off pretty steep with lots of big roots and we were all pushing each other to clean some sections, but we often had to resort to pushing our bikes up the trail. The alpine came quickly though! Some more ups and downs brought us to some fun scree riding.

And that continued with a short, but fun descent, before some steep climbs along sidehills that required some pushing, both of our bikes, and of our abilities to try to clean some sections!

A short descent to some old outfitters cabins.
Here is where our route differed from the book. The book suggests following the creek up a gentle climb to the pass, and then taking a 1000m vertical, 10km long descent to the car at the base of Panorama. Instead, we climbed up a steep trail (more pushing our abilities and our bikes) to a 4 way singletrack junction on the ridge above the pass. I think right goes up to Mt. Goldie where you can descend to Castle Rock, left goes down to the pass for the proper descent, and straight heads into the bowl with some rolling sections before gaining the ridge to Tayton Bowl at the ski hill (The trail connects to the access road right by the "Never Never Land" sign for those looking to ride this the other way). We went straight.

The ride from the junction to the top of Panorama was actually pretty fun. As we got nearer to Pano, and we knew that the climbing was almost all behind us, we could really go full gas up the steep climbs. Earlier on, the legs were feeling burned from the steep climbing at the beginning, but I guess once you know that it's pretty much over and there is still gas in the tank, then you can open the throttle! So we got to the top of Panorama. Now what? 840 vertical meters of ski hill road until we can get to the bike park. How anticlimactic. Well at least Bazooka Joe offered up some smiles.

Great ride. I would like to try to do the last descent properly, I've heard it's awesome, but it is a good idea to call the bike shops first to see if they know what kind of condition it is in (overgrown?). It would be cool to access that descent from the top of Panorama. It would be fairly quick, and no need for a long car shuttle. Another suggestion would be to ride Brewer to Pano, but start earlier on the road to make the car shuttle shorter.

I went for a stroll with my camera and stumbled upon a bike race. 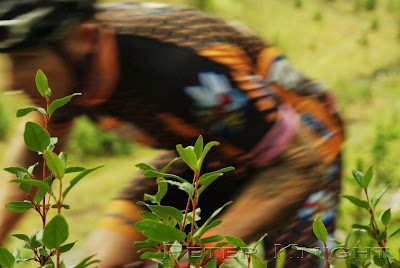 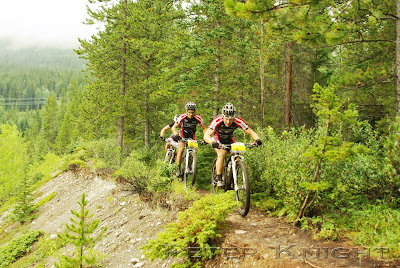 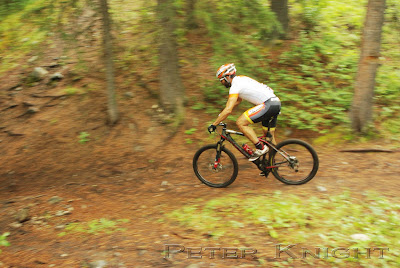 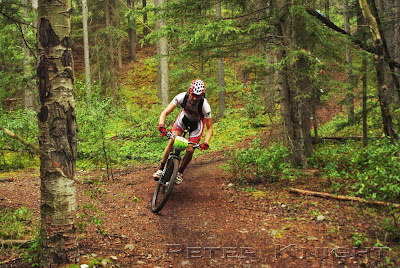 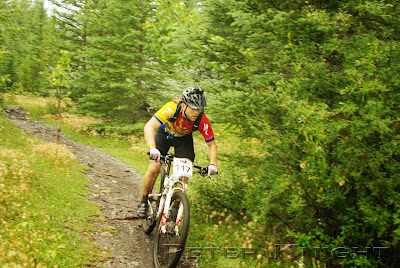 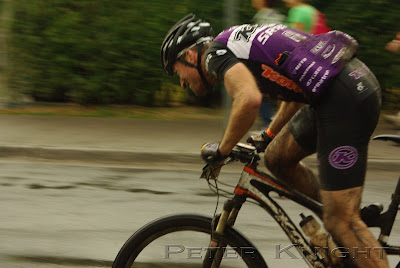 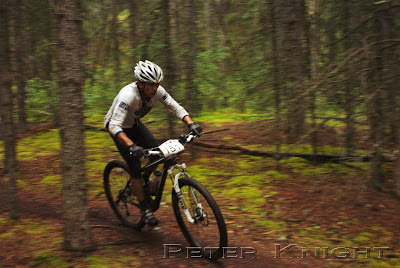 Posted by Edmonton Ski-mo at 5:27 PM No comments: