While Edmonton probably has some of the best mountain biking within the city limits for a city with over 1million people, it isn't exactly known as a mecca of skiing...or ice climbing. Inspired by some shenanigans last winter, I had wondered if that annoying water seepage on that trail below Saskatchewan drive could be ice climbed. Oh yeah, I have never ice climbed before

Craig had some ice tools (also check out that link for awesome route desciptions), and with the spring melt-freeze going on in Edmonton, conditions were PHAT (is that how the ice climbers say it?)

I had given up on riding that trail this winter as it usually involves significant walking sections over slippery ice so I had no idea what the ice would be like. I was pleasantly surprised: 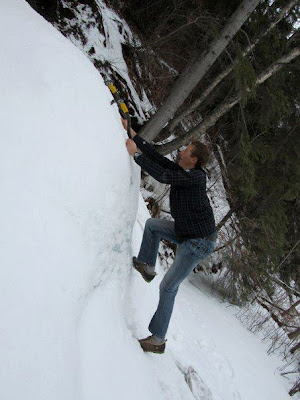 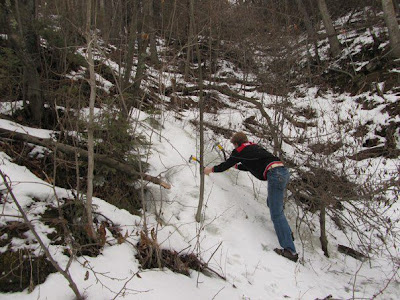 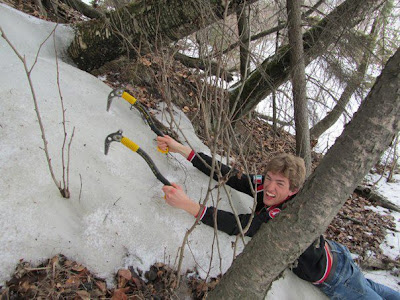 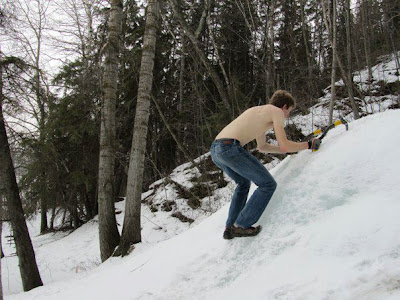 Sun's out, gun's out 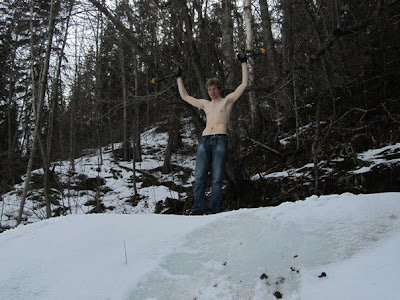 Have you got your tickets to the gun show? 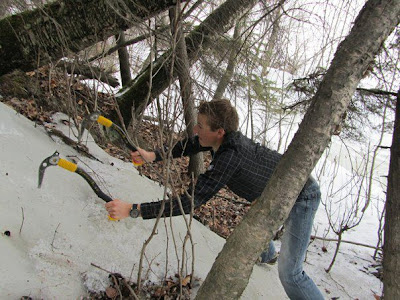 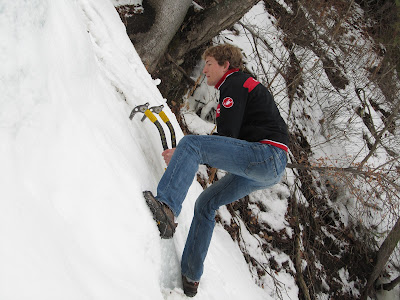 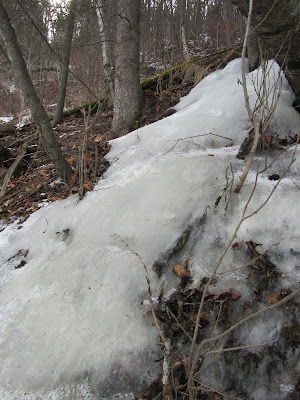 Not many people can say that they free soloed everything and even bagged some first ascents on their first time ice climbing. The ice was perfect with temperatures just above freezing. My only case of the screaming barfies was eating stale free pizza at the university after.

In other news, I have submitted my video "The Backcountry Alpha" in this contest. Look forward to hearing from the Hiker Alpha, the Biker Alpha, and maybe even the Climber Alpha during the summer!
Posted by Edmonton Ski-mo at 4:38 PM No comments:

Had a lot of fun making this one
Posted by Edmonton Ski-mo at 2:10 PM No comments:

The Ken Jones Classic at Lake Louise was the final Ski Mountaineering Competition Canada race of the season and boy was it a good'er!

Course: With avalanche conditions not being as stable as they were last year at this time, the course was different, with some descents down the brownshirt main and first gullies instead of the speed gully on Richardson's ridge, and the course climbed up through rock garden partway up elevator shaft instead of climbing up through wolverine and purple bowl. Last year's course was more scenic and I'm sure it might be easier to motivate some people to race with fun out of bounds descents. This year's course is probably way easier to run logistically and it works really well as a race course.

Technique: Being a city boy, I do not get to ski as much as the mountain folk, and I am definitely one of the slower descenders and I lost some time there. My transitions weren't that speedy either, except the last 2 were pretty dialed, just like my kick turns.

Engine: I took the week pretty easy, almost too easy and I was a little worried about not having enough snap in the legs. I've put in a solid block since the last race and was feeling fit. I got a real good start and felt like quite the hero as I was not too far behind Andrew McNab at the top of the first climb. I settled in and was able to drop the hammer at the top of the last climb to distance Eric Carter (who was absolutely killing it on "real skis": 176 BD drifts, not heavy, but definitely not race skis).

Gear: Skis were freshly waxed (aside from skiing at 2 weekends ago) as I knew there were some flat sections on the course, and the skins weren't sticking great, but I didn't have any failure issues (let's just say they came off a little too easy). Gear was pretty dialed.

TSN Turning Point: The turning point occurred pretty early in the race as I got caught and passed on the first downhill and skins-on transition by Ian Gale. Defs have to work on the descending!

So, a solid race and I rolled in 4th position as I was able to hold Eric off on the descent and the long skiout. This was probably my best race so far. Craig had a tough race, but is confident he will improve with more midweek training.

Some good pictures in the Lake Louise recent photos gallery. 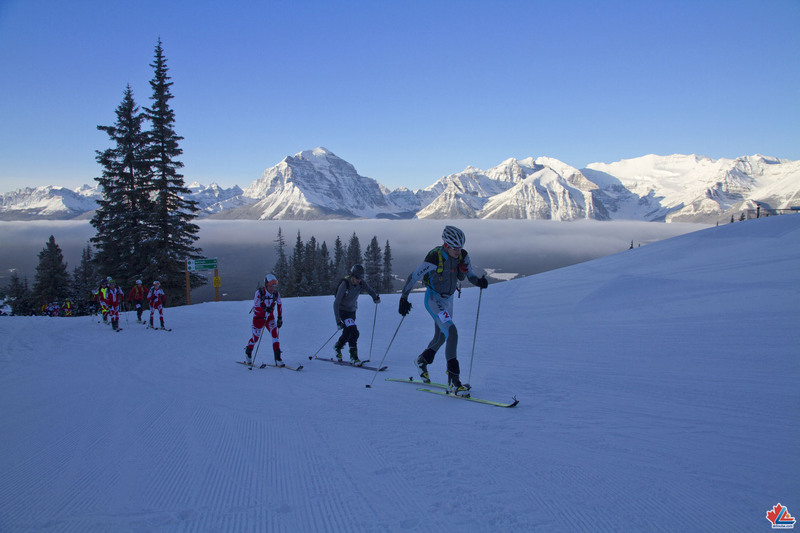 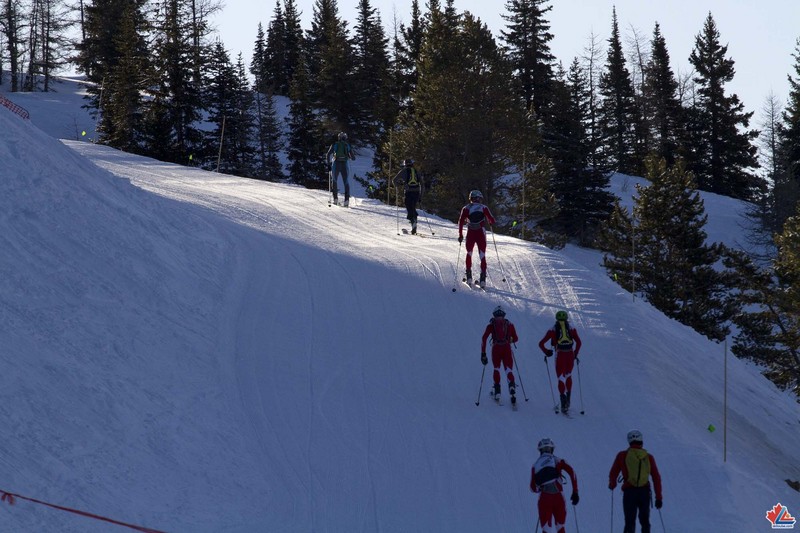 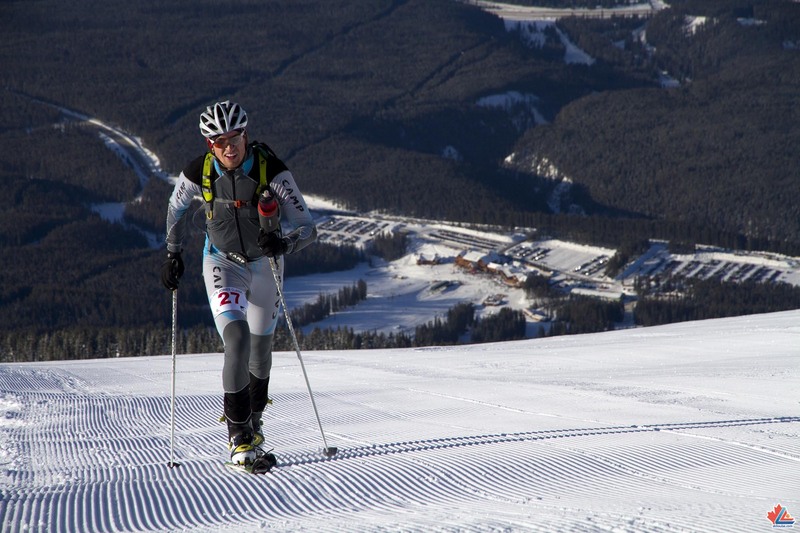 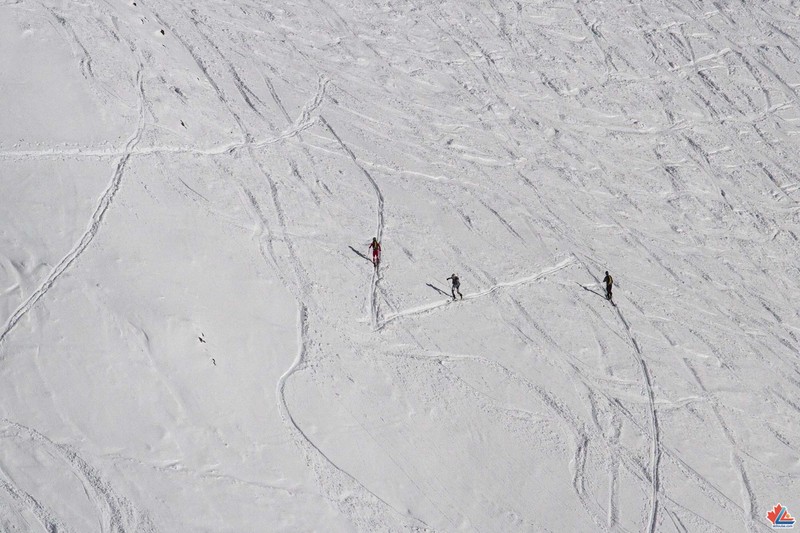 In chronological order, you can view my slowly diminishing hero-ness.

The afternoon was fun as we knocked off some laps of paradise chair with pretty bomber coverage.


Eric Hjorleifson ripping Lake Louise on the Renegade from 4FRNT Skis on Vimeo.

I skied the first line in the video...with way better coverage, way less style, and way less flow. Then we crushed some pizza, nachos, and beer before the podium on the deck of the kokanee cabin.

Hammer Nutrition has been super generous with the prizing and giveaways, and I'm stoked to try some HEED. I would probably buy more though if they didn't have so much promotional material containing people riding bikes with high aspect ratios, aerobars, and seats slammed forward on their rails.

Sunday we got off on a fun tour in Kananaskis, probably my favourite area, but I've only been able to get in there 3 times before. We moved quickly with the sun bearing down on us, and dropped into a dry north facing line which provided some faceshots, even though there were already a bunch of tracks. Solid day. 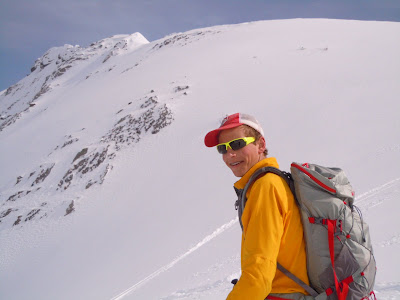 Craig sporting his new backpack, acquired from draw prizes the day before. 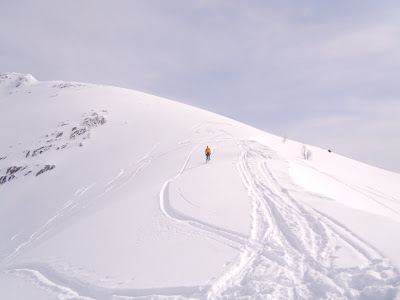 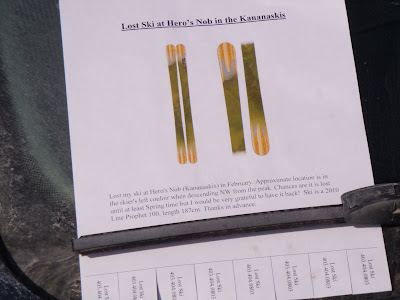 A good reminder to take it easy, no matter how popular a zone is

Posted by Edmonton Ski-mo at 10:48 PM No comments:

Saturday was a bit of a gong show. I was planning on going on a road group ride, and upon arriving at the meeting point, I noticed on of the cleats on my shoes was moving around, but the aluminum (doh!) bolts were stripped so I couldn't do anything about it and just soldiered on. Then my Crank Brothers Candy pedals decided to engage their pain avoidance technology (saving me from possible suffering on the group ride) and disengaged from the pedal spindles. I've enjoyed the float, ease of entry, and mud shedding ability of the Candy's but they are disposable, and I am jealous of my brother's Shimano M520s that still spin like they are new. 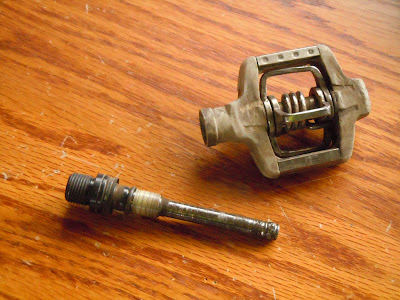 Sunday was the day of the winter bike race in Devon. I wasn't going to race with cleats moving around, so I decided to race in flat pedals, for the first time in 7years. Luckily I had some 5.10 shoes with their sticky sole rubber! Oh yeah, and we were going to ride to Devon from Edmonton...on our mountain bikes...with me using flat pedals.

I've developed quite the diesel engine with all the skimo racing that I have done and was rolling like quite the hero with Andre coming into Devon. Race course conditions were slushy with some rutted out sections, it was going to be a wet race with lots of running! 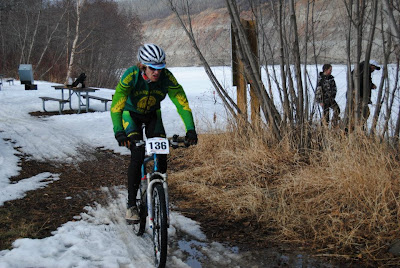 I took it pretty easy off the start and worked my way up and then got into a bit of a battle with Mark from Hardcore, but ended up 4th. 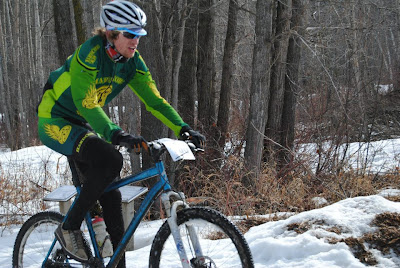 After the race, I enjoyed some chili, and everyone came away with a draw prize. Sweet! Compared to mud and sand, riding in snow is fun. I was experiencing the same sensations as in mud or sand, but my bike wasn't getting super dirty. 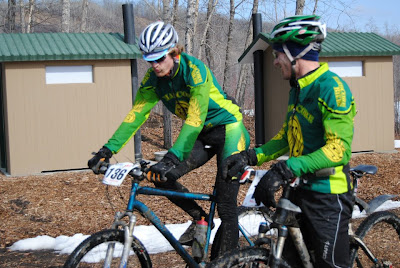 The ride home was tough and everyone was suffering. Solid ride for sure!

Posted by Edmonton Ski-mo at 7:50 PM No comments: 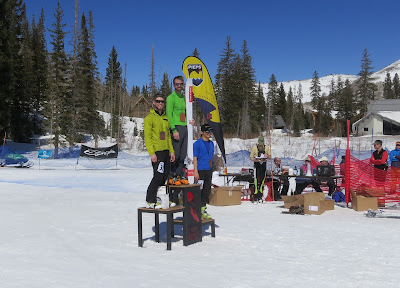 All I see is a bunch of heavy sand...in a bag. In what world are TLT5 Carbons, Maestrales, and F1's considered "heavy?". 2-3 seasons ago, boots in that weight range were as light as they got in North America...
Posted by Edmonton Ski-mo at 6:13 PM No comments:

With snow, wind, and rising temperatures forecasted during the week leading up to and including the weekend, the avalanche bulletin was not looking very promising. I certainly wasn't expecting to do anything other than get some training done. Craig was keen and I had some stuff to do in Canmore to prep my skis for the Ken Jones Classic, so hey, why not?

Got in a nice long climb to a ridgetop on Saturday. It was quite warm, and the snow was quite dense. It was fun challenging ourselves to reduce our exposure to a minimum even in the trees. 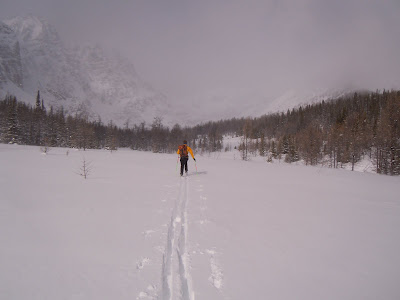 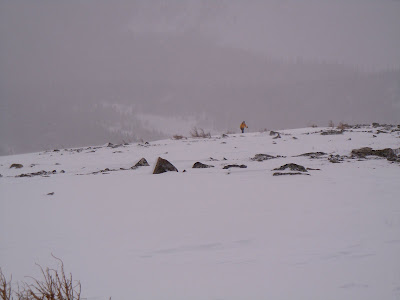 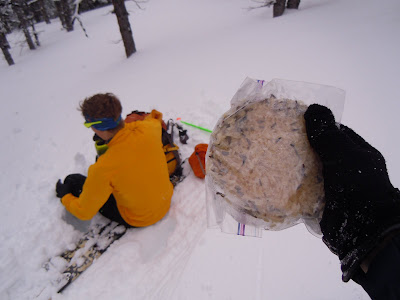 Beezy cake in the forest 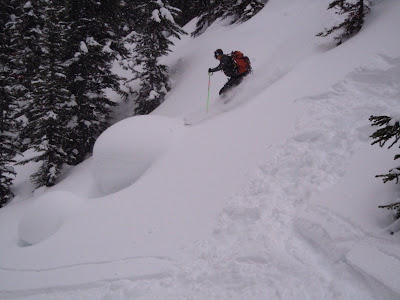 Playing on the bank

Sunday, I was asked to show some friends an area that I have been to often this year. I wasn't really expecting the stability to give us much freedom. Based on our pit results, we did multiple laps, slowly working up into steeper runs. Craig and Graeme were also moving quick and we got in 3 laps before the next group got in 1. 3 first tracks and 3rd tracks on another chute in blower snow in a popular area. Unreal! 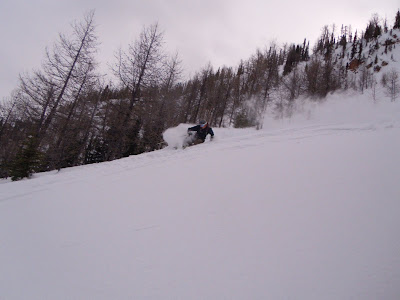 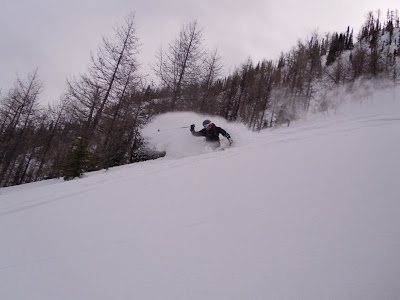 Oh, and stay tuned, there will be some video...

Posted by Edmonton Ski-mo at 8:27 PM No comments: