Whitefish Whiteout or as they say, "Blueout"

After a pretty uneventful week, I met up with Stano and Brad and headed down to Whitefish, Montana for the 6th annual Whitefish Whiteout. It was great to get there a day early and stretch out the car legs and preview the first drag race to the top.

Bluebird weather, and no new snow left us with some fast conditions for what I am told is a record number of racers.

Course: Last year with the new snow, I really struggled on the climbs and had some skin failure issues. The course was the same this year and was marked really well. This time, the climbs were scraped clean and although there was not the deluxe, benched out, skintrack that is common for Canadian races, I enjoyed being able to pick my own line, and I was feeling good on the technical skinning. The descents were fun as well.

Technique: My change-overs were pretty dialed except for a couple of blems that I will have to work out with more practice. I lost time to the leaders on the descents as well, so I will have to work on that. I'm also going to try to speed up my cadence on the flats. I was feeling awesome on the steeper climbs.

Gear: No issues this year. I'm sure Brad wishes he could say the same...

Engine: I sent the first climb really hard and threw down a sub 29min time. I was feeling really good, just slowly faded back from the leaders. The last climb was short and mentally, it was easy to push myself to try to catch the skier ahead.

TSN Turning Point: No real turning point today, maybe except that I couldn't respond when Stano pushed the pace on a flatter section of the 2nd climb and eventually bridged up to Ben Parsons.

Overall, I skied to the finish in 4th place, not really that far behind the leaders and with a decent gap to the rest of the field. At around 1.5hrs, I enjoyed the shorter race. Results are posted on the event website.

Sunday, we met up with what I'm sure is a large percentage of the Whitefish/Kalispell touring community and went up into the mountains.


And I'll leave you with some pictures from last weekend at Castle Mountain. I'm feeling fit, which is awesome because World Championships are coming up fast! 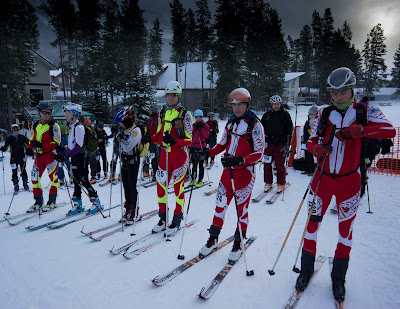 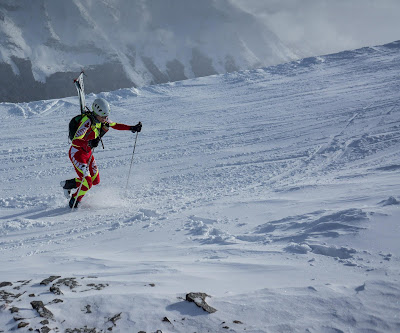 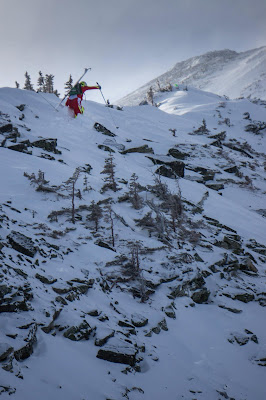 Posted by Edmonton Ski-mo at 11:53 AM No comments:

My brother is an awesome ski touring partner. He has pushed me to become a better skier (and mountainbiker), while I like to think that I have pushed him to develop a better engine. Episode 6 shares the same basic format as the previous episodes, but putting the camera on Bill makes things more interesting.

I'm going to try to change things up a bit for Episode 7, hopefully making things more interesting. Probably the final episode until I head off to Europe.
Posted by Edmonton Ski-mo at 5:27 PM 1 comment:

An exciting new stop on the Ski Mountaineering Competition Canada (SMCC) calendar was at Castle Mountain Resort last weekend. With many of the fast Canadians in Europe, or being good newborn parents, the field was small but with some local fast guys to keep things interesting.

Course: On paper, this one looked to be easy. With really only 2 long climbs and descents, it was easy to mentally break down the race to keep the throttle pinned! The climbing was more technical and I tried to capitalize on that. The descents had good snow and they were awesome. It was a real ski mountaineering race, not a nordic race with metal edges and skins. The course was explained pretty well in the pre-race meeting and even with it being my first time at Castle, it was easy to follow, at least on a macro scale.

Gear: Skins were feeling grippy and fast, skis were skiing well, I could focus on the suffering in the cold!

Technique: My change-overs were feeling good and my skiing, skinning, and scrambling was feeling dialed. I've been able to get out into some fun terrain "training" this year!

Engine: I wasn't sure how I would feel during the warmup, but I was able to get into the zone and ahead going into the switchbacks so I could race my own race. Coming up on Stano, who had to break some trail, I wasn't feeling the killer instinct and got dropped again near the top of the last climb. Racing a little too conservatively near the end of the race.

TSN Turning point: I was placed well on the first climb and did not get held up by others kick turning and sliding backwards ;) and so I was able to race my own race.

I ended up finishing 2nd, was in the change-over zone before the last descent with Stano, but I lost a bit of time on the descent.

Overall, I enjoyed the race, and the organizers did a good job, especially with the food afterwards and securing sponsors to provide good prizes. My only comment would be that some of the volunteers did not have enough time to get to their positions and as a result, some trailbreaking had to be done, and there was some confusion. The course was explained well in the meetings and this Castle rookie was able to follow it well. I guess some people just get tunnel vision... Thanks to the organizers, volunteers, sponsors, and other racers for making this one a good one.

After the race, and on Sunday, I got to check out Castle. Quite the hidden gem in Alberta with some great fall line terrain, good snow. But it must get slayed hard on a powder day!

The above treeline club

Episode 6 is deep into the pipeline, just looking for that final touch to make it great.

The season has started wonderfully and with a high pressure system locked over the region, it was awesome to get up high. Usually at this time of year, the drought kicks in, but so does the wind, and the mountains take on more of a "look, but don't touch" attitude. There is always something special about getting above the trees and into terrain dictated by rock features. 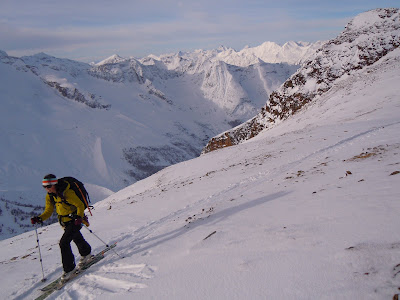 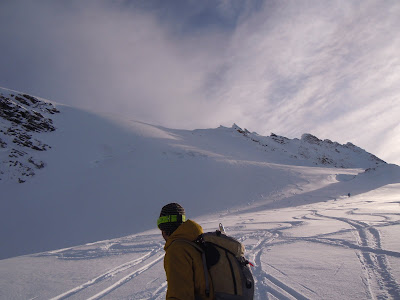 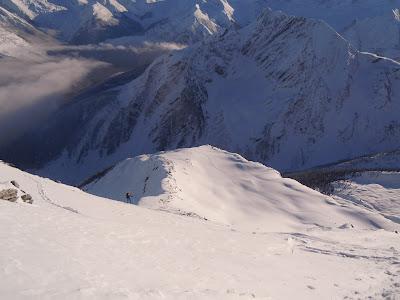 Posted by Edmonton Ski-mo at 1:56 AM No comments: