Once again had to make the solo drive from champion city to meet Bill and MT in Golden. Bill Greyhound'ed out from Kelowna, and MT showed up a day early to rip Kicking Horse and to help set the course. Bill was going to step up for the elite race, and MT was going to take some pictures.

The entry fee included lift tickets, so I did a couple of runs on the big skis and then the race skis to warm up. Some fresh snow smoothed things out, and we could send some arcing turns through Fuez bowl.

The race started with a running start around the restaurant at the top, before venturing through the bowls at the top.

Course: Definitely the sickest course on the circuit, both "Fun" and "Cool". All 4 inbounds alpine bowls, and some awesome descents. 10cms overnight made the ski conditions awesome, but required the volunteers to set the course AGAIN! Technical bootpacks, steep descents, this course was amazing!

Gear: Gear was pretty good today. The only issue I had was on the first descent after the run, my boots didn't lock, but that didn't prove to be much of a problem.

Engine: I was having an awesome race until the final 2 climbs (roughly about 500m out of 1600m left to go). For the race at Lake Louise, I will make sure to focus more on nutrition: fueling up properly the week before, and NOT slamming an energy drink right before the start!

Technique: As good as I could have asked for today. Change overs were quick and I ripped the descents.

TSN Turning Point: The turning point was at the beginning of the 2nd last ascent. The tank was running pretty low at that point. Results at Goldenskimo. In terms of percentage back, I was faster than I was at SSV. Now, I just need to extend the time until I implode! Bill put in a valiant effort, probably suffered, but was put out of his misery when he failed to make a time cut.

The next day was a short sprint relay race with 2 climbs. I teamed up with Bill and suited up. I busted out the value village suit I got for "Putting on the Ritz" in grade 10 (ca. 2005), and Bill rocked his "greasy car salesman" suit. One of my F1 cords broke at the top of the gondola, but it actually did not hinder my skiing that much; the lack of cord tension was more noticeable when locking and unlocking the walk mode. I guess I'm just a skiing Jedi! We both put in a solid effort (Bill was having so much fun climbing that he dropped his skins on both of the 1st lap descents so that he could do more climbing), but we got skunked in the costume prize department...that's the way she goes... 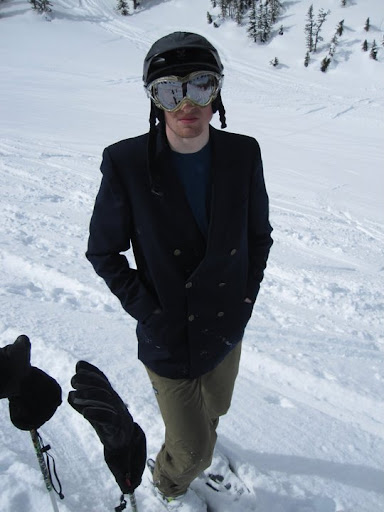 All in all, Kicking Horse and all of the volunteers did an awesome job. With a big inflatable arch at the top of the gondola (or at the yurt on day 2) and Jordan P manning the mic, there was definitely no question that something was going on! Lots of great prizes from the sponsors, an awesome dinner at the Eagle's Eye on Saturday night, and 2 days of skiing; The Dogtooth Dash showed why it is the best race in Canada. Thanks to everyone for making this possible!
Posted by Edmonton Ski-mo at 7:03 PM 2 comments:

Finally acquired Little Big Planet 2, and playing it while riding the trainer makes time FLY by. That game is quite the experience and it really puts me into a trance!

Coming off a solid weekend skiing Try5t L@ke both days, the first with Steve Sellers on the skinny race skis. Skiing pow and tight chutes in flimsy boots and short, skinny skis is quite the experience. Lots of skiing in the backseat, and lots of faceshots. Somehow, I stomped a small pillow line on the way out. I returned the next day, this time on the “weight training” setup and ticked off some more chutes. I skied the area closest to the Fist, and even though there were already a couple of tracks down it, she still sluffed. For my final lap, I skied a narrow rock chasm line. After a couple of jump turns, I straightlined the exit, but hip checked into the deep snow. Poor form! Gotta work on those…

Dogtooth Dash is coming up. I am stoked, as this was the race that planted the seed last year. Bill is coming up to race as well! Will Dogtooth Dash use Leech Seed on Bill, so that he will do more races?
Posted by Edmonton Ski-mo at 11:07 AM No comments:

This is from the Xmas break, I have finally been able to convert some of the video files and get around to making a video. A fun area was discovered that we used to just ski right by!

Posted by Edmonton Ski-mo at 8:49 AM No comments:

Still pumped from my short jaunt down to Nelson, I have scoured the blagosphere for more recap of the coldsmoke festival! My Coldsmoke buzz is certainly worthy of a fourth blogpost (although it was no Norway trip...).

What did others think of competitions, the clinics (one of which was put on by Ian Gale in the ROAM race. I attended, and I learned that I need to speed up!), or the atmosphere of the festival. Too be honest, I was a little let down by the atmosphere, but I guess we only really got a superficial Coldsmoke experience (we didn't stick around much longer after I received my award, didn't hit up the events in town, clinics, or events other than the skimo race). The expo area was definitely a highlight, lots of new 11/12 gear, some swag, and Steve got to deploy a BCA airbag pack

G3 did a writeup here, as one of their employees duked it out in the ROAM race.

Phil Best took some nice pictures (I would say that they are some of the BEST) at www.bestphotos.ca. I think he would rather not have me post some of his pictures on my blag without his permission so that all my mom would have to do is right click, save as, so here it goes:

I got #13, and I flipped it upside down like any superstitious Euro cyclist would. They were understanding...

"Why do bagpipers always play the same song"

Just minding my own business, hammering away

How about the one on the right?

Anyways, there are some really nice pictures, and I would encourage. Lots of people racking up some hangtime and getting upside down in the slopestyle! Stoked for when the highlight video comes out! More pictures on the event website

It was definitely a fun guys weekend, with an epic game of word association (think obscure 90's hockey players and celebrities) and women's curling. I am really hoping that I can rig up my schedule for next year in a way that I can skip class on Friday and Monday so that I can return, and maybe gun for King of Coldsmoke! Hopefully the snow is a little better...

Anyways, a good way to grow interest in the sport, especially with the industry presence and stepping up with some great prizes! Speaking of great prizes, rumour has it that the Dogtooth Dash will also have lots of stuff to give away, should be a fun race!
Posted by Edmonton Ski-mo at 12:07 AM 2 comments: