The 3rd edition of the Fernie Lizard Skinner went off last weekend with promise of a more interesting course and the addition of a sprint race on the Sunday. 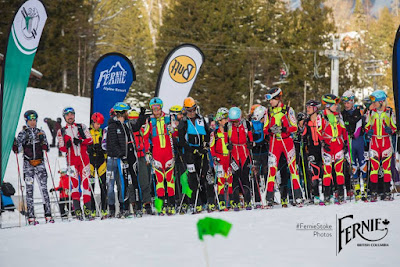 Avalanche conditions in the week leading up to the race were interesting, forcing the organizer to juggle around different course options. In the end, we would be racing to the top of the White Pass chair after a similar "first lap" to the top of the Timber chair as in previous years, before skiing on Stag Leap, which had been closed to the public during the cycle. 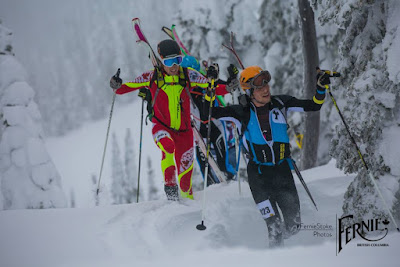 The classic groomer drag race remained, but a group of 4 (Me, the Joels, and Tyson Smith) remained at the top of the first climb. I was able to string things out further on the longer 2nd climb and managed to get a gap on the group of Joels. The 2nd descent was interesting with the Megasaurus trail mixed in there, which required some sidestepping in soft snow before a short bootpack partway up Stag Leap. 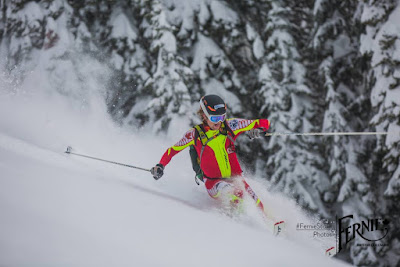 The conditions on the descents were much more enjoyable than in previous years where we had to battle rain crusts. Although Big Bang was a no-go due to avalanche conditions, we got to enjoy excellent powder skiing on Stag Leap down to the finish. I held on for the win! 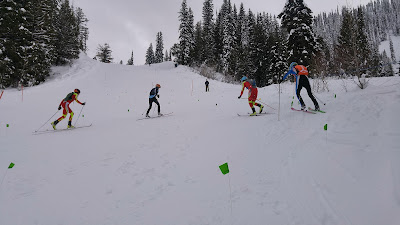 On Sunday, we sprinted on the short race training pitch by the Haul Back T-bar, although it was tough to watch people skiing powder across the bowl on Snake Ridge. Again, the racers worked the course, making it wider with more opportunities for passing. It is nice being able to provide some input. I had a series of excellent races with dialled transitions and good pacing to take my first sprint finals win! Tyson's sprinting was impressive as he was always able to build up a huge gap before the bootpack but some bobbles in transitions and descents cost him a spot in the finals.
Posted by Edmonton Ski-mo at 1:15 PM No comments:

Can you put your skins on without taking your skis off?

No. Even if you could, it probably isn't faster due to all the fiddling and you have to take your boot out of the binding anyways to change from ski to climb mode. Wait...


Do competitors have to analyze avalanche conditions during the race?

The courses typically take place at controlled ski areas (in North America) or are approved by guides (in Europe) so that competitors from first place to last place just have to focus on racing and not navigation or safety. As well, the course is set in advance. Wait...
Wouldn't that be interesting though, "you can centrepunch that steep, crossloaded, slope if you want and you'll be 5 minutes faster!".

I'm a hotshot nordic skier. Can I try a race on my skate skis?

If your glutes can handle 1500m of herring bone climbing on ungroomed terrain, keep your skis from snapping into pieces, grip hard snow with no metal edges and soft boots, and trust that little metal bar to stay on your boot and in the binding on double black ski terrain then be my guest. But it's a terrible idea. And it's against the rules.

Could you keep up with this guy?

What's with the skin tight suits? Don't they get cold?

Only if you stop moving! 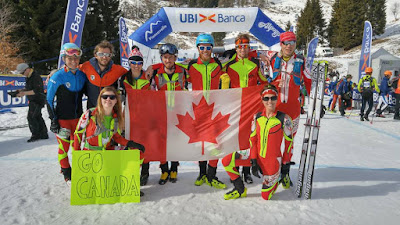 How long is a race?

Typically the first finisher is done in 1hr 30mins to 1hr 45minutes.

No, I mean how far do you cover?

The target goal for setting a course is more based around elevation gain. 1500-1700m of vertical. The overall distance isn't that important, but is usually 12-17km.

12km? That's it? That doesn't sound very impressive.
Posted by Edmonton Ski-mo at 5:57 PM No comments:

If you are reading this and you know a kid born in 2002 or later who is possibly interested in ski mountaineering racing, run, don't walk and tell them that they could represent Canada at the Youth Olympic Games in Lausanne, Switzerland in 2020. Canada gets 2 spots each for male and female. Qualification takes place at ISMF sanctioned races, and unfortunately the last chance in North America before the games is the Ken Jones Classic at Lake Louise this March. MEC and University of Calgary Outdoors Center rent equipment suitable for qualification or if you really want to make a statement, you could demo some real ski mountaineering race skis from SkiUphill . After qualification, there is plenty of time to iron out the finer details of what will hopefully be a longer term pursuit into ski mountaineering racing!

Update: Unfortunately, the United States Ski Mountaineering Association found out from their Olympic committee that there will be none of the USOC's limited athlete spots allocated to Skimo. Should the Canadian Olympic Committee follow the same decision, it looks like there wont be any North American athletes selected.
Posted by Edmonton Ski-mo at 7:54 AM No comments:

What appears to be an updated boot from Scarpa with some features Alien RS. Lower shell appears to be like the current Alien 1.0, but with covered Boa system borrowed from the Alien RS. Does the lower shell maintain the existing internal laid-up carbon fiber internal skeleton or does it utilize the carbon reinforced injection mold plastic of Scarpa's RS boots? The CF reinforced injection mold material is reportedly stiff, but difficult to punch! A Scarpa Alien RS 1.0?

Posted by Edmonton Ski-mo at 10:13 AM No comments:

"Well, at least they don't need to bring out the chainsaw". "Does anyone have a real shovel?"

It took some hard work from the organizers and Eric to chisel a skintrack into the slope for the sprint race. But by the time the race started, we had sculpted a good course. And that is something I love about these sprint races. We are given a bit of freedom to add elements to make passing easier and racing fairer (more equitable lines, larger transition areas, wider turns).

I felt like I never really found my limit in my qualifying, quarters, and semi final runs, but was in for a rough awakening in the finals when I found myself off the back at the start. Unfortunately I kept picking the wrong set of skis to follow but eventually worked my way up to the tail end of the group finishing dead last in the heat but still only 6 seconds behind the winner.

Although only really consisting of 2 climbs, this course has it all: A nice groomer start to spread things out, skintrack with kick turns, ridge bootpack that both ascends and descends. Steep cattrack drag race. Excellent skiing on smooth wind buff and "bottomless" powder. Nick wasn't here this year to tag team with Eric and string out the group, so I took on those honors. The first uptrack was a little blown in. Noticing that other skiers were coming up only a couple of switchbacks below, I took a pretty solid turn at the front to keep the pace up, but not blow up, focusing on keeping the skins gripping. Eric upped the pace at the top following some downhill ski tracks and continued even through some deep trailbreaking. Mike Foote also got away blitzing the downhill ridge bootpack section. There was a bit of confusion when the bootpack started to ascend again as we didn't regain the ridge, instead sticking to the groomer (and marked with green "skinning" flags) until popping out onto the ridge just before the top of the climb. Mike and Eric were later penalized 1minute for skinning part of this section. High winds on the ridge made things very cold and visibility difficult, but once at the top of High Rustler, it was excellent skiing on wind "groomed" snow. The slower first climb meant that I had a lot left in the tank and I blasted my fastest time ever up the cat road for the 2nd climb. I had heard speculation of horror stories related to the snow quality of the final descent with some rain crust evident at the base of the ski area but I found nothing but dry, bottomless powder. Tiring, but fun skiing on the race skis. Happy with a 3rd place, and gives me a good idea on where I can improve (pacing and descending) in future races.

Lots of good war stories at the end once people started rolling in: A broken ski, faceplants, burning legs on the descent, skin failure, kickturn struggles and bottlenecks, time cuts (with high winds and cat ski area availability a good call by the organizer to ensure the future sustainability of this race...)
Posted by Edmonton Ski-mo at 2:47 PM No comments: