The Ken Jones Classic was the final race of the SMCC calendar and also served as the Canadian National Championships. With the death of the Dogtooth Dash, the Ken Jones Classic now stands with just Castle Mountain as a top Canadian course. The field  that assembled at mid mountain early on Saturday was one of the strongest to take on the course. Sure it was lacking certain racers of a bygone era hailing from Valemount and Revelstoke.

I got my typical holeshot start and skied out front for what felt like an eternity, but in reality it was not even to the first switchback of the groomed ascent. Eric and Nick were battling all year from Canada Cups to World Cups. When Nick got on the front, all I could do was try and see how long I could hold on. My shins protested, but I hoped  the pain would go away, unlike last year. I settled into 4th behind Rob Krar.

The descents were skiing well, and the skintracks were well set. I was more relaxed on the 2nd climb, and could even watch the battle unfolding behind me. Ben was ripping the descents, and blew by me a couple of times in some tight sections. The 3rd climb consisted solely of a bootpack up into the ER5 zone, which has not opened for a couple of years.
The 4th and final climb up to the top of Elevator shaft from Temple Lodge is always hard. It is long and it comes late in the race. It is never really steep or technical, but it is important to keep the pace high on the flatter sections. Here I slowly faded behind Ben and Rob and ended up in 5th after skating the long skiout trail to the finish. I was hoping for a little more fight on the last climb, but I was pleased that of the 4 climbs in the race, I buried myself deeply on 3 of them. As the 3rd fastest Canadian citizen, I even got a chance at podium glory.

I'm impressed with the progress that I've made this season. Even though I've been doing this sport for a couple of years, and training for even more, there are still ways to markedly improve! Frequent readers will recall that last year I was a little worried about the large group of enthusiasts nipping at my heels; this year I was pleased to be racing for spots ahead of me.

Posted by Edmonton Ski-mo at 6:21 PM No comments:

Ski mountaineering racing in Canada has traditionally been a regional affair. While Whistler once held the most prestigious race in Canada, 8 years have passed since races were held on the final portion of the Spearhead Traverse. The Ski Mountaineering Competition Canada (SMCC) calendar is now with the exception of a race at Whitewater, entirely in the rockies. Thus the “national team” members are all based in Alberta and BC. I believe if you were based in Kimberley or Cranbrook, the entire calendar including Whitefish would be within a 4 hour drive. That’s not to say that people on the coast aren’t trying, it’s just that the resorts around there aren’t cooperating! And our officials are based in Calgary. The sport is very slowly gaining momentum with more people showing up in suits and light gear, and at the sharp end of the pack, more people training specifically and race times are getting faster. 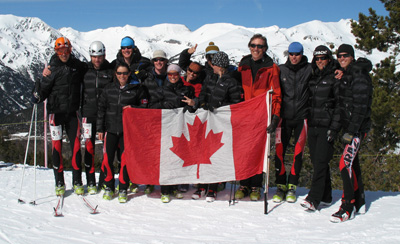 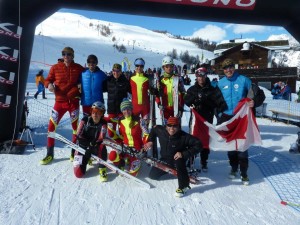 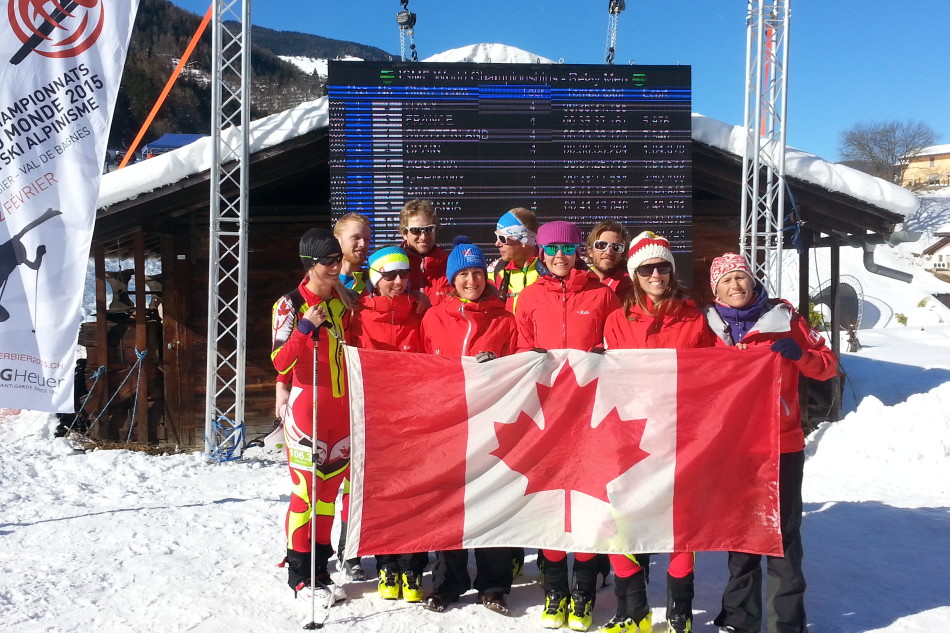 
Numbers on the national team aren’t increasing with the growth of the sport. For the 2010 and 2011 world championships, Canada sent a full, 8 person men's team and had to turn away interested racers. Down to 5 men in 2013. In 2015, only 3 Canadian men (and 1 Junior, Oliver Bibby, who stepped up for the Teams and Relay races) made the trip to worlds. Similar numbers to the 4 who went in 2008! Low numbers mean that we’ve been avoiding the politics that come with team selection and have been able to focus on being fast in February, rather than being fast in January just to make that team. The womens team has been steady at 3 members...
Racing is emerging out east having grown beyond the NE Rando Race series with the Skimo East series. These guys race a lot and yeah, they allow snowshoes and runners, but they make do with what they have. George Visser and Lyne Bessette, both former elite bike racers look to be logging the victories over there.


Meanwhile, the growth of Ski-mo in the United States has also brought in interested Canadian citizens living in the US. Canadians Rob Krar finished 3rd (2nd in the sprint) at the recent Wasatch Powderkeg North American Championships, while Tosch Roy finished 8th (5th in the sprint).

It will be interesting to see how these “out of series” racers stack up against the SMCC national team members if they are interested in 2017 World Championships. With no direct comparison, it could be difficult to select a team. Will there be a showdown at the 2016 Ken Jones Classic in a couple of weeks?
Posted by Edmonton Ski-mo at 12:19 PM 1 comment:

Last spring, I convinced Travis, Adam, and Mark to take a look at a ski tour that I've been thinking about for a while. Kicking Horse Pass to Lake Louise via Opabin and Wenkchemna passes.

After blasting our way up to Lake O'hara to warm up, we skinned up towards the Opabin glacier, admiring the large face of Mt. Hungabee and a neat looking line off Mt. Yukness. The Opabin glacier was interesting with a cornice running down the middle and we were able to avoid what looked like crevasses.
Topping out the col, we dropped into the Prospector valley, steeper up top, giving way to a lower angle traverse before transitioning above the Eagles Eyrie rock feature. The slope up to Wenkchemna pass was consistent and definitely avalanche terrain. It would have presented a nice ski descent with some powdery snow on top of a crust that was making skinning difficult. We stepped off the deep slidepath and booted up over the windswept col.
The descent down to Moraine Lake was mellow, right from the cross loaded gullies at the top. There is the option of adding additional challenge to the day by climbing over Wastach Pass and descending Paradise Valley. With the sun beating down on the south slopes of Wastach Pass, we decided to just ski out via Moraine Lake road. The slope really mellowed out as we approached Moraine Lake and it was important to work the terrain features and the still supportive crust to minimize polling and skating. Moraine Lake presented us with some skating through moistening snow. All that was left was a slow slog out along Moraine Lake road.

The snow was slow and moist, quite a departure from the fast trackset that is found here in the winter. We skated, then switched to polling to give the feet a short respite from the pain. Tired, blistered, and thirsty, we rolled into the Moraine Lake road parking lot after 7.5hrs, ready to pillage the gas station in Lake Louise.

There was a period in my skiing where I was trying to push my limits, skiing stuff like Mt. Smuts, Narao Couloir, etc...After reverting back to weekend warrior status, I'm finding I'm not getting comfortable enough with the snowpack or my skiing abilities to push things even further. Instead, I've been enjoying skiing stuff in great conditions with my friends, working my way through the guidebook classics, exploring new terrain or rallying things on the ski-mo skis. 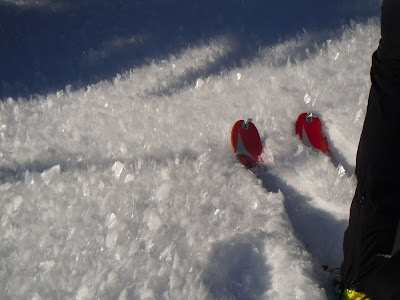 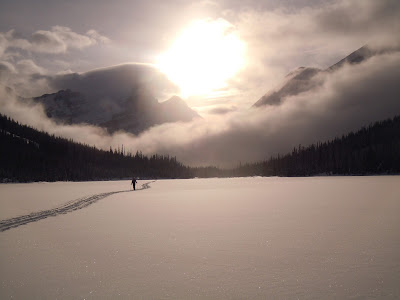 Or instead of pushing the slope angles, pushing to the next slope. 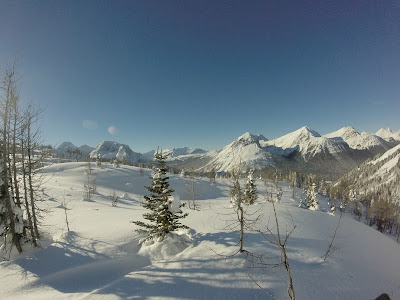 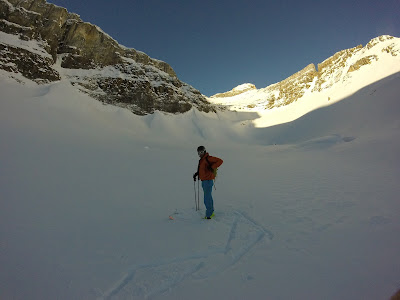 Revisiting my favourite run, the excitement and uncertainty of that first run long gone. 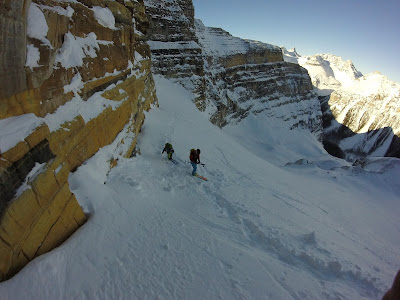 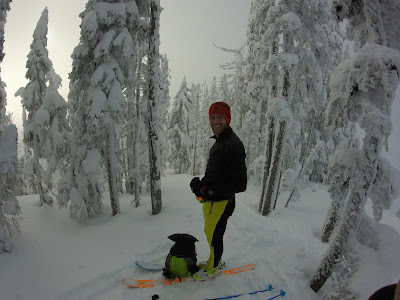 Crushing vert with friends instead of puckering up. Skimo racing is the perfect diversion before avalanche conditions improve in the spring. 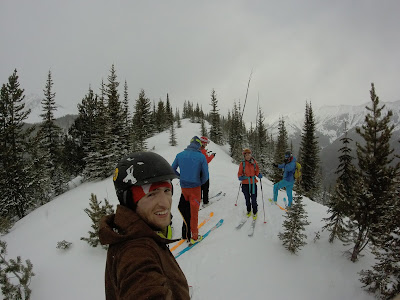 Posted by Edmonton Ski-mo at 7:40 PM No comments: