After the race, I checked out the expo area and demoed some gear that I am interested in. I wish I had more time to demo, but I felt like I was able to hit up the most important stuff. My ski touring has been more focused on training, touring more vertical and more often. Because 90% of the time is spent climbing, and sometimes the descent is not always in hero snow, I think it makes sense to go with a lighter setup that will leave you with more energy at the top of the climb. I am starting to think that early rise tips are also a good idea, not just because they LOOKZ STEEZYZZZ, but because the tips don’t dive in the typical rotted out snowpack we get here early in the season. The windslab snow that was very prevalent would be a good test!

When I started ski touring, I was naïve, but I also wanted something that I could ski or tour at the resort. Now that my quiver has expanded, and I have started climbing more vertical, my current slackcountry setup is less practical. That said, this year, I have been touring almost exclusively (other than my race setup) on alpine trekkers either in my Explosivs, or my Quads. When I ski on this setup, I don’t have to wait for my friends, and I must be reaping the benefits of “weight training”.

There is a new generation of gear that skis as well as stuff that is lbs heavier!

Voile Vector (180cm): First thing I noticed was that the tails seemed really long. Maybe something to do with how the boot centre of my boots lined up in the demo bindings. The windslab that was foiling my beloved Rossignol Quads (and my Atomic TM:11 race skis) was tamed by these skis, and then they proceeded to rip on the groomed. There is a waxless version for next year; according to the rep you can climb some decent hills without skins!

Dynafit Manaslu (178cm): These skis felt a little more natural and I think they fared even better in the windslab. Not as much edge grip as the Voile Vectors, but still a pleasure to ski. These would require new bindings.

Scarpa Maestrale (27.0): MT has these boots, and I have been predicting that they will take over the market as they are light, tour well, ski well, and are relatively inexpensive as far as touring boots go. The unmolded fit was definitely tighter than my Typhoons (The Scarpa reps loved the yellow Scarpa Hurricane tongues that I put in the Typhoons, they could not stop talking about them). The boots were a little difficult to get on, and were a little tight, but skied really well. Would definitely need to mold the liners though…

I ran out of time before I could demo something ridiculous like the new Black Diamond Gigawatt, or the Salomon BBR, or even my Scarpa F1 race boots on a bigger ski.
Posted by Edmonton Ski-mo at 6:36 PM No comments:

Ready to rock on Saturday morning, almost got psyched out by some dude wearing the same skinsuit as me.

My usual rule is: “Someone is only fast if they are willing to rock a 1 piece lycra suit”, funny because the cycling tights worn by those who don’t want to rock the onezie usually end up being MORE revealing!

So anyways, I jumped off the line to get out of trouble and drag raced with Ian Gale to the 1st descent, not long after the start. He was quick to rip the skins and got a huge gap. 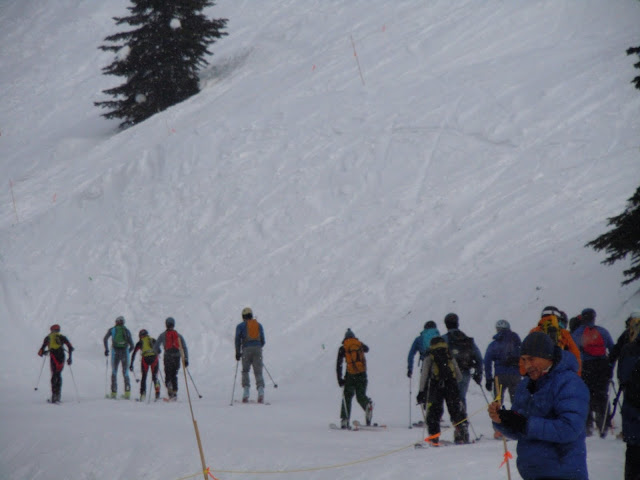 Course: I would say that the course was “cool”. It gave you a good tour of the resort and the descents were almost exclusively in the backcountry around the ski area. Lots of flat sections though, and a skins-on descent. The ridge descent was “interesting” weaving between trees and snow drifts. The 2 main descents would have been awesome if the snow didn’t have a wind crust on it! It was nice to get a big climb over with right away!

Gear: No gear issues today, the skis weren’t liking the wind crust too much, but I don’t think any race ski would!

Engine: Engine was pretty good. I like getting the big climb over with first thing, and I actually closed the gap a bit. I don’t think I pushed hard enough on the flats, but definitely opened up the throttle on the climbs.

Technique: Lost some time on changeovers and the descents. Climbing, I felt like I was doing pretty well.

TSN turning point: Top of the 1st descent. Ian ripped his skins way faster, creating the gap before the long flat descent that required some skating.

A much better race for me, only 8 mins behind Ian, as opposed to ~19mins at Scumshine. Finishing times were similar, but obviously he didn’t have anyone to battle with up front. The prizes were VERY generous: I came away with a set of Garmont Radiums in my size! Thanks to the event sponsors! Definitely planning on returning next year if my school schedule will allow!

While I was racing, the boys were hitting on Michelle, the bartender, who seemed very interested in how my race went, or so I am told.

Some event coverage from www.backcountryskiingcanada.com here and some results here
Posted by Edmonton Ski-mo at 6:24 PM No comments:

Okay, so I have officially hyped up this blog post more than it deserves to be hyped up...

The weekend after the Scumshine 5000, I teamed up with my buddy Max and we entered the Powder 8 competition at Lake Louise. What is it with me and taking the fun out of skiing powder! I dusted off my synchro skiing skills (It has been 4 years since I have paid CSIA dues, but I found synchro skiing relatively easy). We put together a solid run, and I skied pretty much as close behind Max as possible (my ski tips hit his tails on a couple of turns). While we were synchronized, I was a little out of position, almost skiing beside Max at one point. We failed to qualify, but that was OK as the lift tickets were cheap, and there was some pow to be skied in the bowl that hadn’t opened to the public yet! Thwarted on a dawn patrol mission of deep pow by closed highways…BLAST!

Then the weekend after that (family day weekend), I went for a solo backcountry ski mission. Although it is a realization that I need more touring partners, it was fun to crush some vert solo and if you go to a popular area, it is a relatively safe way to get some training and some pow skiing in. You can work on your race change-overs. 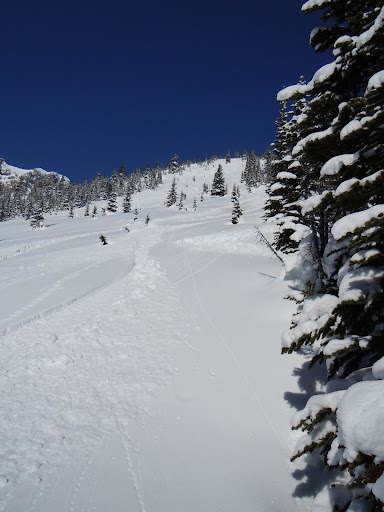 Now for the main event: We hit up Kootenay Pass on the way down. What a cool area! Nice short laps and you can ski right to the highway! We were a little unprepared for the west Kootenay cold (Since when does it get cold there?), and the snow was a little wind affected, but some good turns were had. Ainsworth hot springs was definitely WORTH it: we had a nice circuit of main pool - cave - cold pool and did multiple laps. 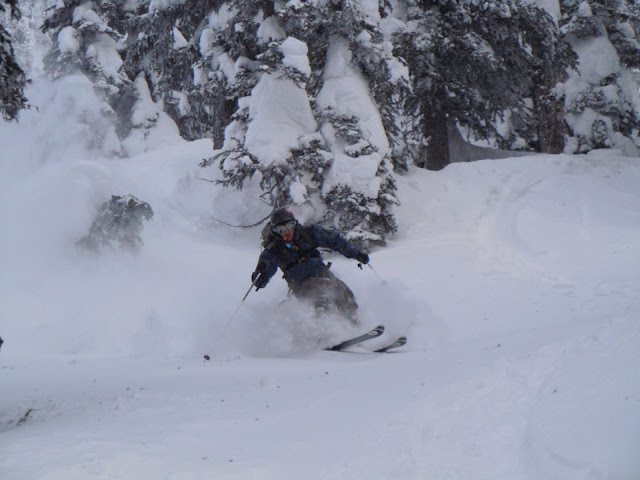 Off to Whitewater, the snow in the alpine was also wind hammered, inbounds was skied out, but I had some fun inbounds runs, and the new backside chair opens up a whole new world! Ran into Ian Gale, shit, looks like some tough competition in the race tomorrow! 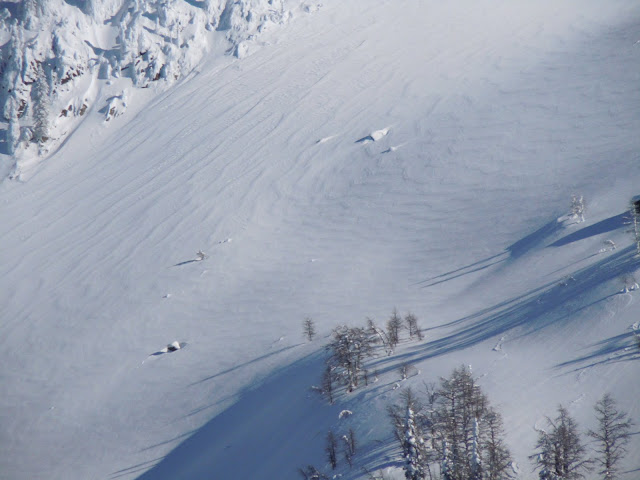 Posted by Edmonton Ski-mo at 6:09 PM No comments:

In support of the ski patrollers and the rest of the staff, I refused to pay the $66/$45/$26.44 (all +GST) that they wanted out of me for a ride to the Goat's Eye base for the start; instead I opted to skin up the ski out and add the money saved to my Little Big Planet 2 fund.

Instead of giving a long, drawn out, blow by blow, tri-geek/Cat5/Novice style, overanalyzing race report, I will give you a summary:

Course: The course was pretty fun. More low angle skinning, but otherwise a good balance of long/short/steep etc, and the course provided a good tour of the resort, while preventing encounters with the paying public. The descents were not ridiculously technical and the snow was good.

Gear: Since I am new to this style of racing and have not put too many miles on my gear, I am expecting some hiccups. Boots were awesome, but I need to make sure the levers on my boots are engaged! The skis had just been tuned by MT and were very predictable. I had some skin failure early on (I shouldn't have left my skis w/ skins outside before the start!). I found that the "middle" climbing aid on my bindings was too high, so I skinned the whole race with no climbing aids (heel on ski mode).

Engine: I was sitting pretty good off the start, until I blew a skin. I lost some time there, but the gap continued to increase through the race. I barely fended off the cramps on the last climb. Maybe a little more fuel (water, gel, etc.) required.

Technique: My transitions need some work to be competitive. I really stuggled on the last climb as it was steep and slick with lots of kick turns. I didn't have anyone to compare my descending to; the legs were burning, but I felt in control, so I obviously was not going fast enough!

TSN turning point: I was in contact with the last group of national team members near the top of the first climb, but one of my skins blew off my ski, so I had to stop and put another one on. I was rattled, lost some time, and crashed on the first descent where I needed to carry speed when one of my boot levers did not engage. This caused the initial gap, but I would lose more time on the climbs and the descents as the race went on. I got beat by faster racers...

In terms of placing, this is exactly where I thought that I would probably finish. There's room for improvement, so hopefully that gap can come down...

The Rx: MORE everything

I am probably the youngest skimo racer in North America who has the balls to rock a onezie. This is good, as I am sure that most people wish they had started racing at an earlier age...

MT raced the short course, got 2nd place, and collected some swag. Steve and my parents cheered me on, using the lifts to follow me around the course, keeping me pumped! We also had an unreal descent to the bottom at the end of the day!
Posted by Edmonton Ski-mo at 7:14 PM No comments: