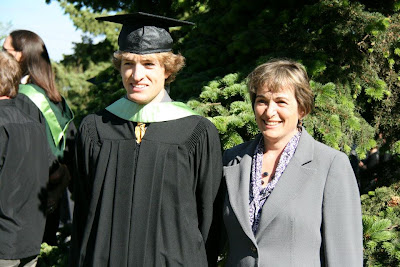 After a quick trip back to Edmonton for my convocation, I returned to Canmore during monsoon season. I didn't even bother riding on Friday as it rained hard all day. Saturday morning, it started to snow. I usually ride up to the nordic centre when I race there, but I wasn't very motivated to get any colder and wetter than I needed to.

Anyways, didn't get in much of a warmup and we were off for our shortened race. The organizers had decided to make the course much easier than in previous years, so it was mostly rideable in the horrendous conditions (maybe softening the course and mentioning on your website how the weather cannot possible be worse than last year is not a good idea?).

-It took me almost a lap to get into race mode, but after I started hammering the hills, I felt better on the singletrack
-Unfortunately, I broke my chain after Devonian drop. I fixed it, then I had an over the bars crash in a puddle, then I realized that my brake pads were worn out. Finally, a good excuse to quit and put on some warm clothes.

Went for a ride up to Highwood with Malcolm to check things out. 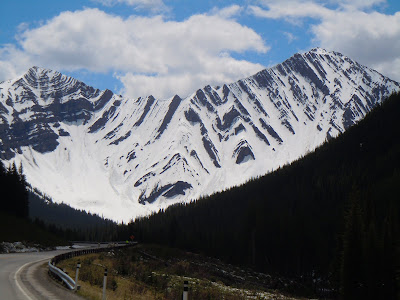 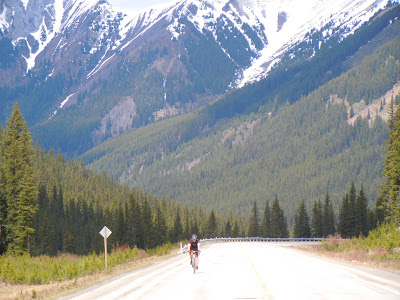 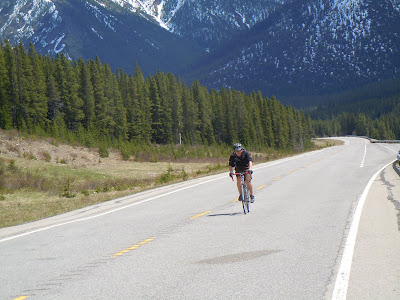 the verdict? don't put away the ski gear just yet!

Posted by Edmonton Ski-mo at 4:49 PM No comments:


The first stage, a long XC race didn't go so well. The legs weren't feeling great and I was getting beat up by the rough singletrack on both the descents and the climbs. The newer trails at the Canmore Nordic Centre look like they are smooth with wide bench cuts, but they are actually pretty rough (as in not smooth), capable of dropping chains, require balls out speed descending to be competitive, and suck power on the climbs. I also had a slow leak in my front tire which finally sealed after stopping to pump it up with my hand pump 3 times (why burn a CO2 when I'm that far off the back, and besides, CO2 usually freezes Stans fluid right?). Anyways, I soldiered on and finished...DFL and way off the main group with a bunch of riders in other categories who lapped through faster than me.

Before the race, I was joking that if I was DFL, that I would race the XC time trial on my Marin Attack Trail. Weighing in at 30lbs, 150mm of front and rear travel, and a 66 degree head angle, it is hardly a svelte XC race machine, but I figured, that the extra travel would be favourable over the previously mentioned rougher than it looks singletrack, and the weight would only really suffer on the smooth fireroad Georgetown climb. Well the big bike actually fared quite well and I finished the TT about 7th overall, right in there! Morale boost!

2hrs later was the final stage, a hill climb up the Spray Lakes road. Back on my sub 25lb XC race machine, I put in a solid effort and finished 3rd. I've still got it!

After descending down the reclaimer trail, I was convinced that I had not ridden enough that weekend and then rode highline with Bill. Solid weekend. The courses utilized some of the funner Canmore Nordic Centre descents (T2, Coal Chutes, No Homers) but also featured some punishing rougher than it looks singletrack (EKG, FYI, Long Road to Ruin). But hey, it's racing, it's supposed to be hard right?


Monday, I think I finally got into mountain bike mode with a fun ride at Moose Mountain with Bill and Ryan Hopping. We had a good time catching up and riding trails, pneuma (probably my favourite singletrack climb), shaft, and ushoulda (so good, we rode it twice).
Heading back to Champion City for convocation but I hope these clouds clear up so I can do a road bike Highwood Pass recon mission. The Iron Maiden race next weekend only has 97m of elevation gain per lap, and utilizes a bunch of those rougher than they look trails, so it will be a legitimate game decision RE: racing on the Marin Attack Trail. Definitely time to rethink the race whip...

Posted by Edmonton Ski-mo at 2:47 PM No comments: