Rant: Stybar won from the forth row.

A season of Fat tire Tuesdays has just wrapped up. I appreciate the efforts put in by the Hardcore and Redbike cycling clubs to provide the Edmonton community with a venue for some low key racing. Staring down the barrel of 12 races alternating between Sunridge and Terwillegar was daunting, but due to rainouts, only 8 ended up going off. I like that the organizers can just pull the plug at any sign of adverse weather or trail conditions, it saves us from having to clean our bikes, crashing, and/or breaking bike parts.

At the beginning of the season, I was nervous, as I usually am for these type of races. A long elite race gives me plenty of time to settle in and eventually arrive to a consistent finishing placing or time. Smaller elite fields and longer sections before the trail narrows mean starts aren't as critical. These short fat tire Tuesdays sometimes barely crack 30 minutes. One major mistake or bad legs could mean getting embarrassed by a sport class rider! Good starts are important, as the lead group can get out of sight within a half lap if you get stuck behind a weaker rider on the singletrack.

I struggled in week one with a slow start that forced me to have to close a MASSIVE gap halfway through lap one, except I couldn't and ended up missing the podium. Week two, things clicked and although I again had to chase midway through lap one to regain the lead riders, I was able to attack on the next lap. In the next 5 races, it almost felt like I had the respect of the rest of the group as I was allowed to go 3rd or 4th wheel even with a small "buffer gap" into the singletrack off the holeshot.

Anyways, with the finale of Tuesday night MTB racing for another summer, the cyclocross bikes have already started coming out, and I'm sure Jeremy Powers DVD's and cyclocross camps are already showing up on credit card statements. Everyone is being told that you must start from the front row just as Tour de France commentators routinely emphasize how important it is to be at the front of the peleton. To avoid crashes, to avoid bottlenecks. I used to love cyclocross as it was the only discipline where I quickly rose through the ranks. Now, I'm a little jaded. What was once a fun celebration of a cycling season has now become THE cycling season.

Cyclocross is big in Edmonton and a midweek race can bring out a couple of guys capable of a top 5 at nationals. We can play "see how long you can hold on to their wheel" with some top caliber riders. There are 15 or so Alberta cups providing plenty of opportunity to upgrade, so anyone who is fast should be in elite. So why are the front rows packed with midpack expert and sport racers 10 MINUTES BEFORE the start? Racers who can't even last a lap of "see how long you can hold on to their wheel". I and other elites like to get a fair shot at "trying to hold the wheel". Or should I use these races to learn how to battle from further back? Not something I really have to worry about in small AB cup elite fields, but if I ever decided to race nationals. Does it even matter? Stybar won World Championships from the forth row.

Cyclocross is all about heckling. Make sure to let the people on the front row know if they are racing outside of the top 8. 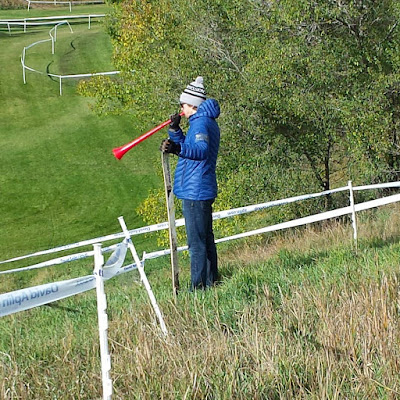 Posted by Edmonton Ski-mo at 12:05 PM No comments:

Another year, another weekend getting roped into doing a 24 hour race. Some friends in Golden were desperate for another rider to join their 4 person team. I know that a 5 person team presents enough suffering as it is and it would be even harder with one less team member, though I did ride for almost 6hrs on that 5 person team. The trails in Golden beckoned and even the initial forecast didn't look so bad with just a slight bit of rain to "keep the dust down", I reasoned.

I'd ridden a loop like that in the Mountain Shadows area before, so I wasn't too worried about pre-riding the course as I would probably get in more riding than I wanted over the course of the weekend.

First lap, off the tag, our leader had a wonderful lap and I tagged off in 2nd, not too far behind the leader (Leighton). I set out hammering up the new Schaecher trail climb (that will eventually go up Mt. 7) and along the extremely flowy trail above the gravel pit and rodeo grounds. Seriously awesome trailbuilding going on in Golden! Chipping away at his lead, I caught the leader at the top of a downhill and went ahead, but crashed over the bars right after with him right on my wheel. Stunned, but no dripping blood, bike seemed ok but the bars were twisted. Strava says I spent over 1.5minutes collecting myself and getting my bike going haha! I got back into the groove for the rest of the fun lap, and still managed to throw down a good time before tagging off to Pierre.

Back in my tent, I could hear rain drops starting to fall. For our team's 2nd go through the rotation, we were going to do 2 laps at a time to give each other more rest between laps. The course was littered with rocks that would be slick in the rain, but I focused on riding smooth and nailed the section that brought me down on lap 1. Soaked after one "hot" lap and another good lap on a course that was deteriorating, I headed to sleep.

Up in the middle of the night for 2 night laps. The rain was still going strong. Not something I was looking forward to, but I just wanted to get it over with. Lots of anticipation. Then the tag comes. The climbs were slick and the trail was one slick puddle. All I could think of was the grit getting blasted into the bearings of my bike, and my brake pads that were already low on life. The kilometers slowly ticked by. It was amazing how some technical sections would sneak up to me in the dark and I managed to ride without much fuss. Nearing the end of the lap, I thought, "what the heck, what's another lap?" and my final lap ticked by. Time to crawl back into the tent to get some sleep.

We had the race locked up, and er fortunately our laps were taking longer than 1hr now, so there wasn't time for everyone to get in one last lap. I politely declined and hopped in the car and drove home from another crazy weekend of mountain bike racing.

The root and rock laden course is punishing in the dry and in the wet, quite a contrast from the speedway that is the Canmore course.
Posted by Edmonton Ski-mo at 11:26 PM No comments:

I realize we all have to start somewhere. I remember my first bike race, a Tuesday night race in Terwillegar park. I was 14. It cost $2 to enter. I think I did just two or three laps and watched in amazement as Evan Sherman defeated my idol Steve Martins whom I'd met on group rides.

I hope I have the story straight, but maybe just a couple of laps into my race, I heard the rumbling behind me, stopped and got the hell out of the way as they flew by close to double my speed.

When I was 16, I raced a Canada Cup and a very muddy Nationals. I wasn't a very good rider, and had the elite and junior women pass me after making up the start gap and the elite men lap me.

Now, I'm racing closer to the front of the pack. The fastest elite women and junior men at the Canada Cups might still have to pass me (and I better let them because a podium position in those races is more important than my 34th place), but I am now finding myself more of a passer than a passee.

I've got a bell on my bike, and I ring it and yell out "rider up!" or "onyerleft" when approaching a rider from behind. Some people pull over to the right, stop off the trail, and lean their bike further off the trail at the first immediate opportunity. Another group for whatever reason think that merely slowing down, moving over to a random side of the trail and continuing riding, giving the passer a very narrow window while swerving around trees on the side of the trail is enough. It's not.

Even more disgusting are the people who ignore any requests for passing and might let you pass at a trail intersection. Ive seen this before when lapping sport men riders. They even look back, see me coming, then try to race me. Didn't realize that 34th place was so important to you.

I know it sucks that the passer is interrupting your flow. I know that battle in a 24hr relay is important to you (by far the worst etiquette I've seen is in 24hr relays). I'm not asking you to stop on a fast descent or a tricky section requiring momentum. But who wants to ride with an impatient and faster rider RIGHT on their wheel? It's better for both of us if the passee would just stop and vacate the trail.
Posted by Edmonton Ski-mo at 11:24 PM No comments: