In February of last year, I made a short compilation out of the best clips that I had gotten up to that point. At that point, I was well into E-SKIMO episode 8 and I had lots of great video to chose from. I ended up winning Backcountry Lodges of British Columbia Association's monthly prize, a week at Mistaya Lodge!

Fast forward to earlier this month and I was pumped, and although the average age of that week's clients would exceed 55 as estimated  by the lodge manager, the weather was looking good. Weather-wise, I picked the perfect week. After a week of frigid weather, the skies opened up and it snowed almost 1m of snow while I was there!

On Sunday the fly-in day, I was a little hungover and I knew I had to bring my 'A' game if I was to sit shotgun in the helicopter for my first ever ride. Fortunately the flight went fairly smoothly, but with some clouds obscuring views of the high peaks of the Freshfields and Mt. Forbes. Mistaya Lodge is just on the other side of the divide from Peyto Hut, in fact it is not uncommon for motivated groups to exit to Bow Lake over the Trapper-Baker col.

Upon arriving at the lodge, I was hit full force with the smell of warm cinnamon buns, in a warm, spacious lodge complete with composting toilets and 4 person bedrooms. A definite step up from the ACC huts.

We explored zones like Heather Ridge, Mista Vista, Leprechauns, Wildcat Moraines, Grindal Moraines, Red Cliff, Mohawk Ridge, the Abyss, the Waterfall, Shroom Room, Sarah's, and Leah's Lane. Runs below the lodge (Shroom Room, Sarah's, Leah's) were definitely the highlight of the week as they were full of partially submerged boulders where we could bounce over the pillows.

I really enjoyed the skiing, and I found that lodge owner, Dave, and assistant guide Ken had an excellent handle on the area and were able to get us into some fun terrain even during elevated avalanche danger.

I found the guided pace to be almost excruciatingly slow. There were probably some of the best ski conditions that I would find all year (comparable to Valemount), but collectively, we just didn't have the speed, endurance, or quick transitions required to make the most of it. A couple of days into the week, I resorted to breaking my own trail to keep things interesting for me. There was a 6-4 split of slower skiers to "better" skiers, and there were days where we skied as a 10 person group! 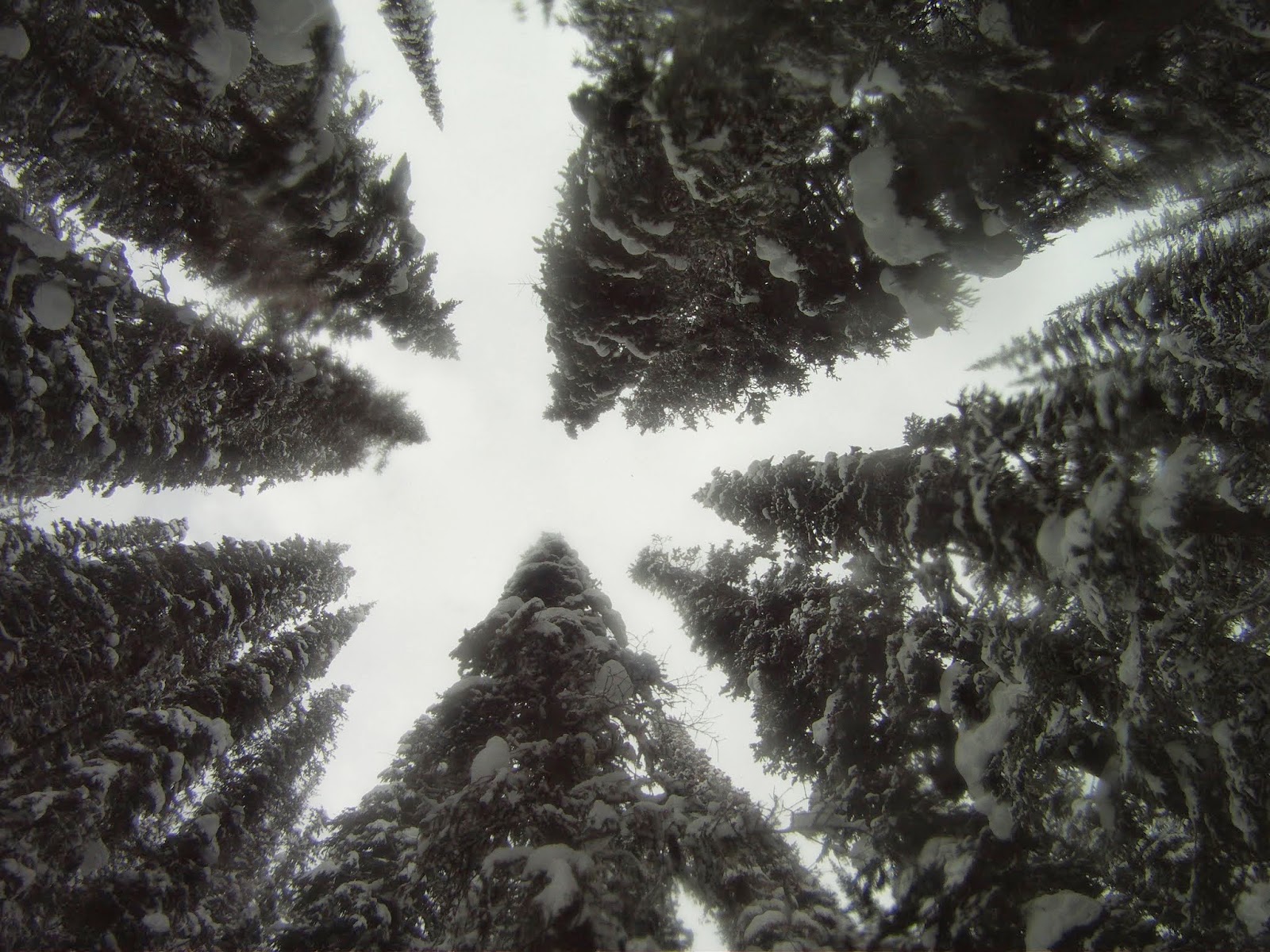 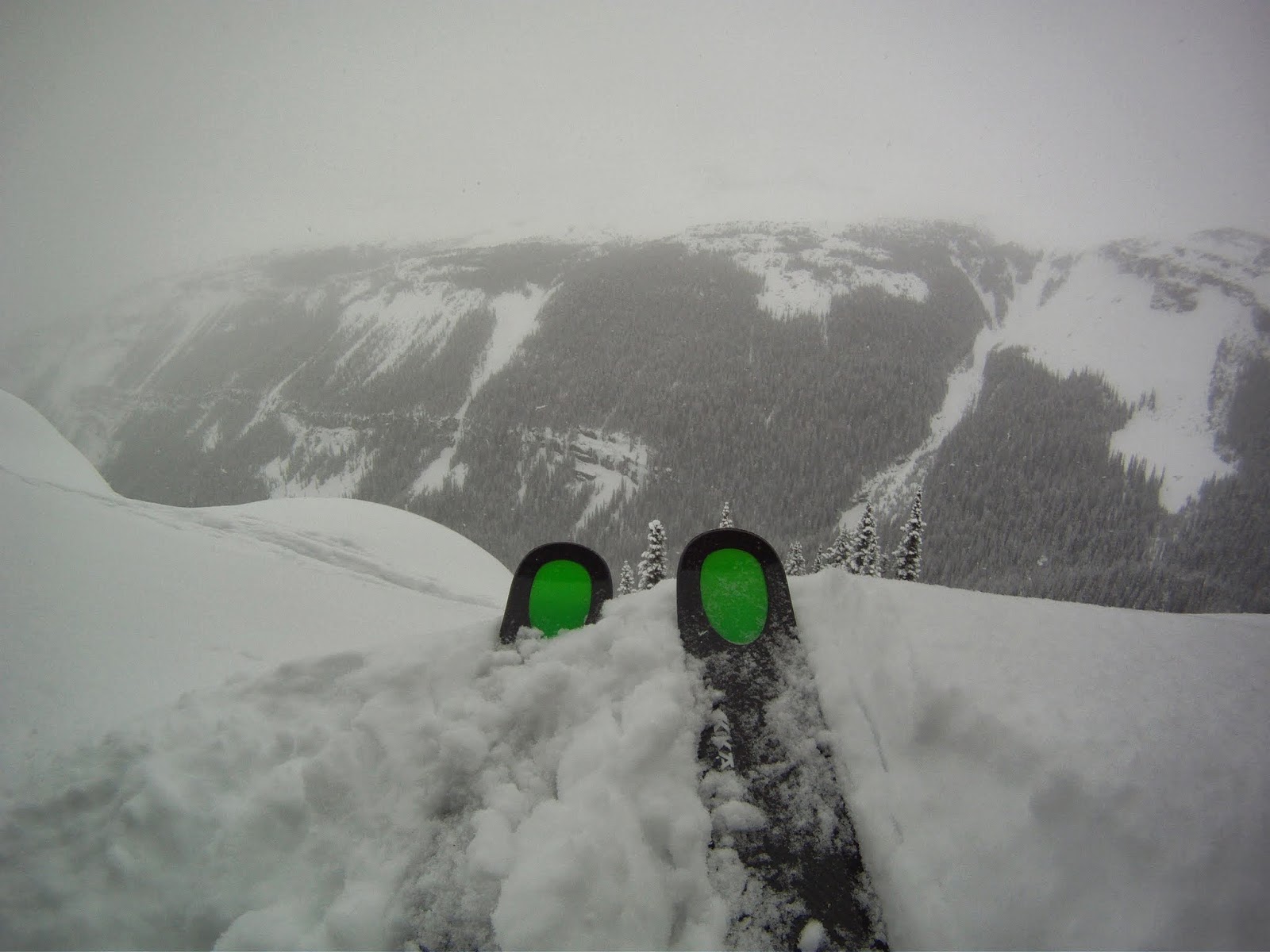 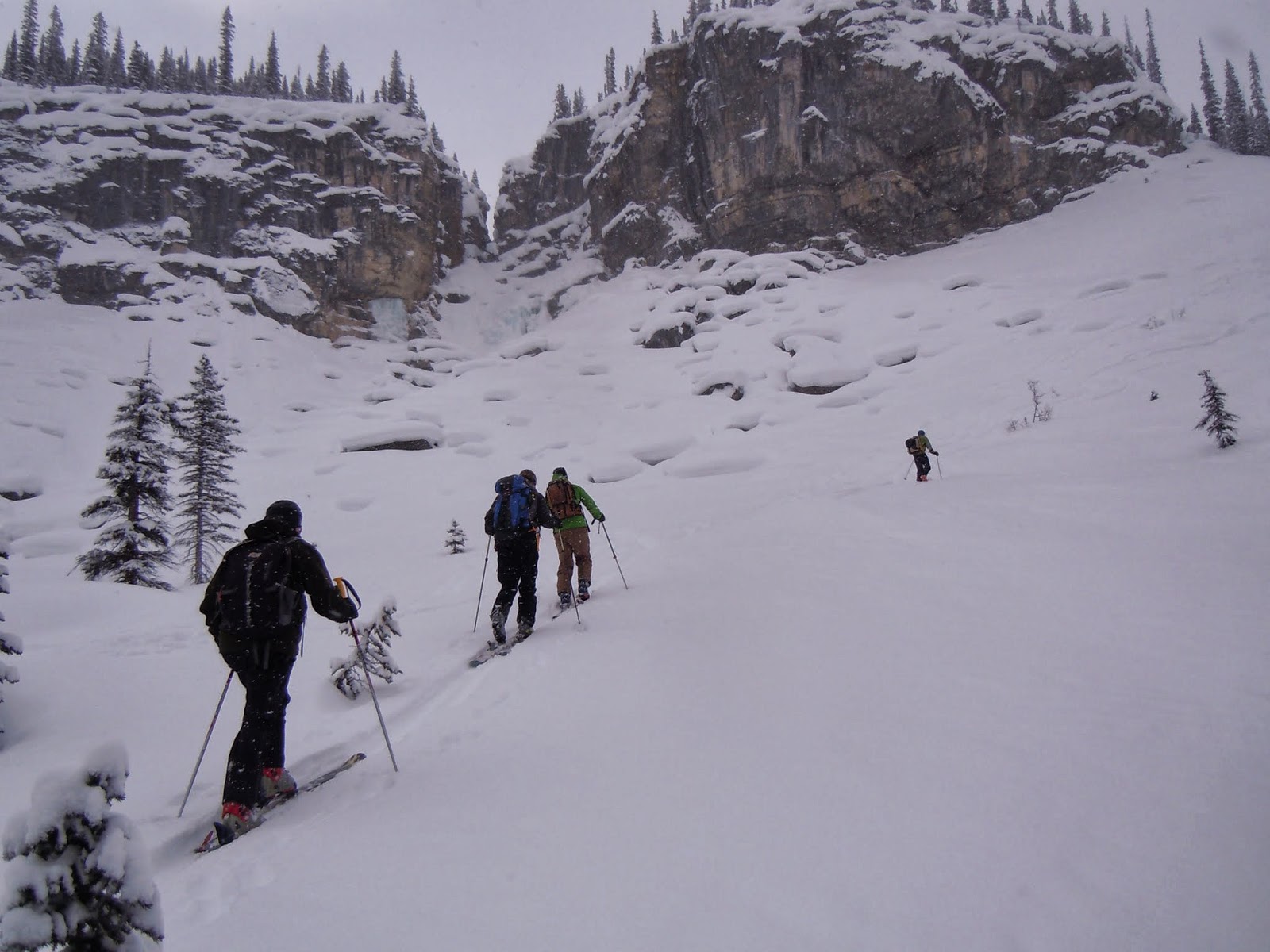 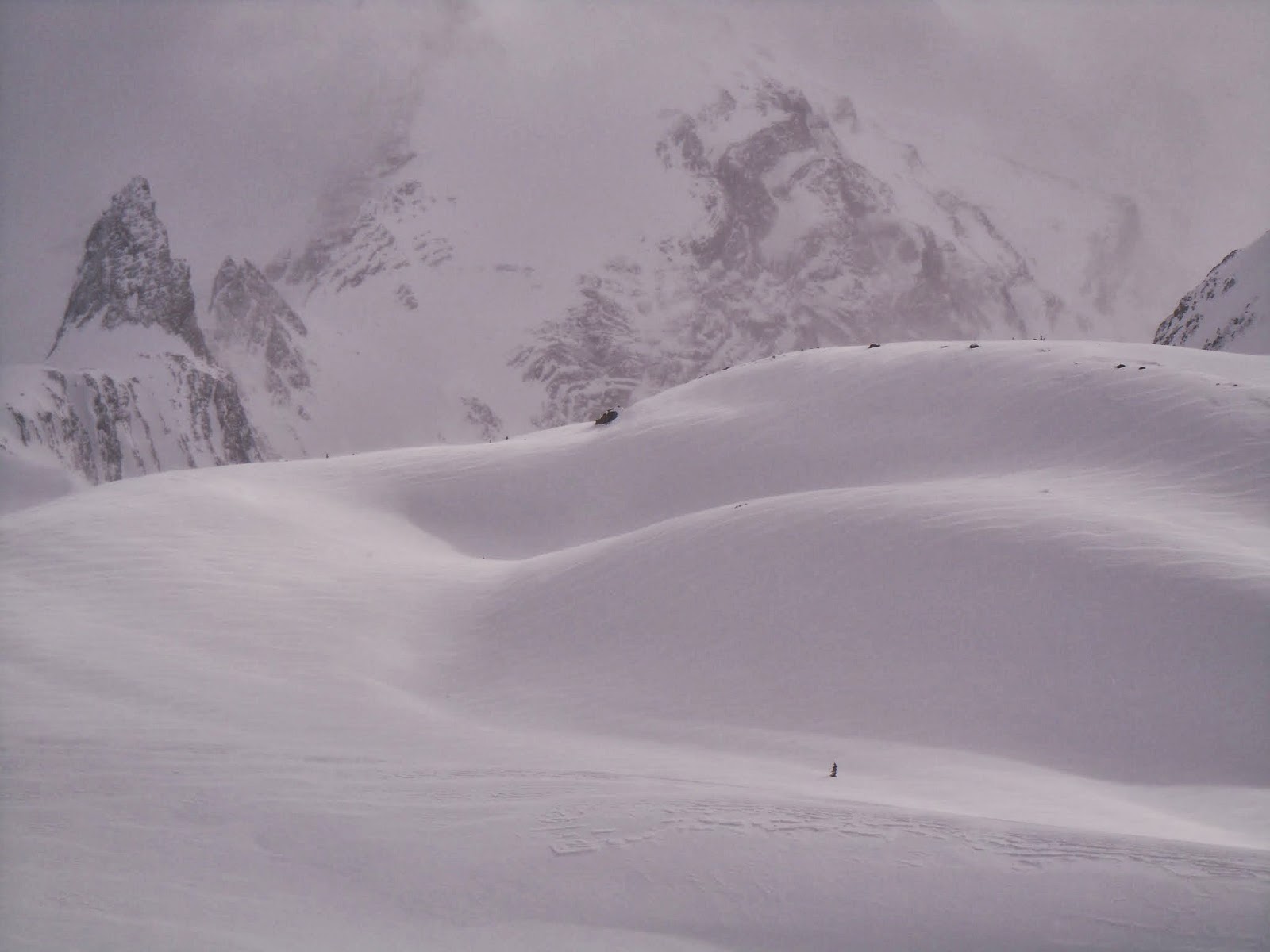 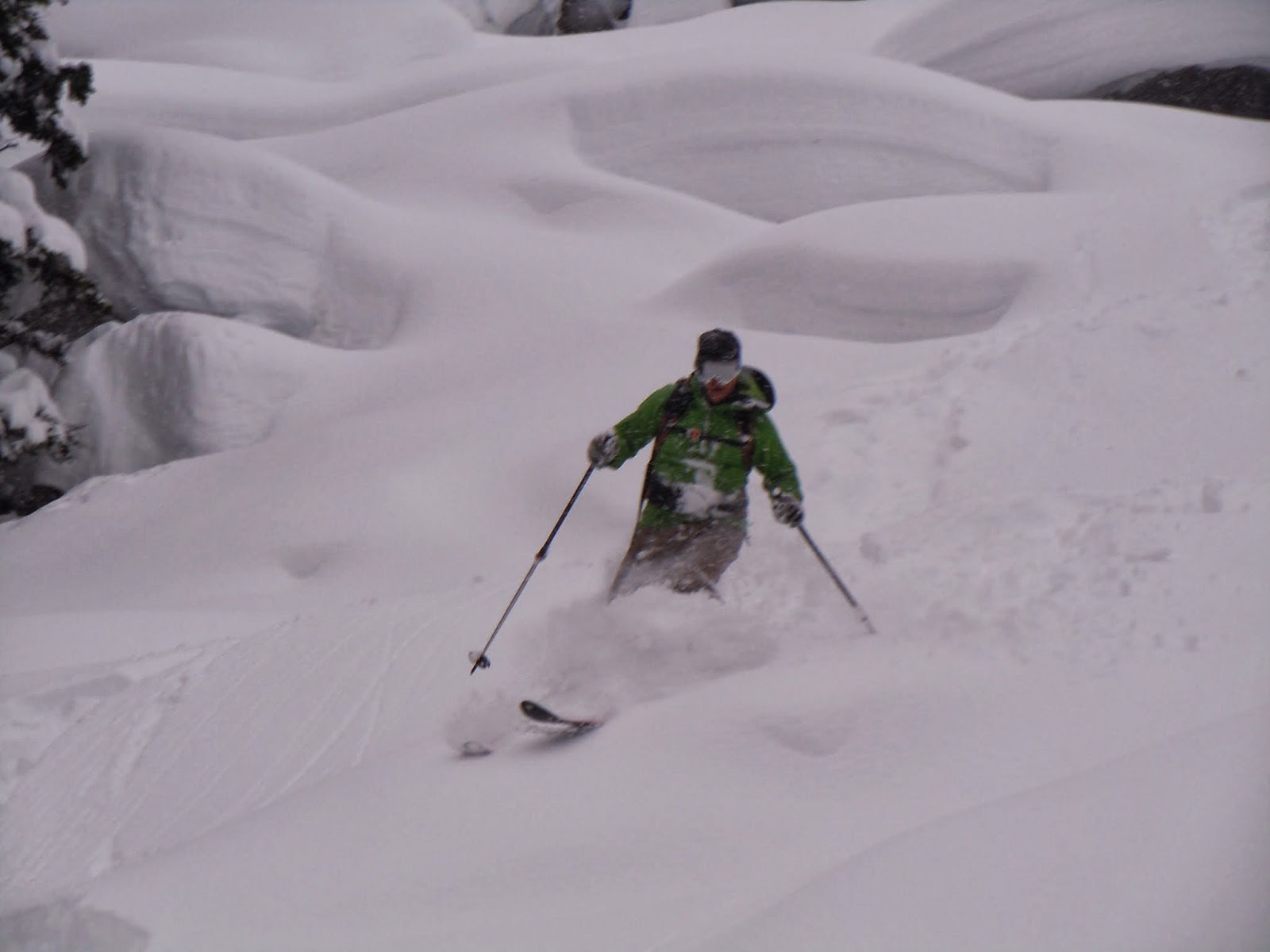 The food and terrain knowledge of the guides has made me a believer in the catered and guided experience, but I think it is important to roll up with at least half the lodge consisting of shredder buddies to make the most out the skiing experience! Or I should check out Selkirk Mountain Experience or CAPOW's Fit and Furious week.
Posted by Edmonton Ski-mo at 4:02 PM No comments:

This one was interesting. With both HWY's 3 and 3a scheduled to be shut down on our travel day, we opted to instead head to Nelson via Revelstoke, and unknown route for me, but an excellent adventure.

We stopped at a small ski hill just outside of Nakusp with the intent of skiing a couple of laps to keep the legs from getting too stiff. We skied up and down an untracked run on the far side of the ski hill...until we got kicked off! Apparently the run was closed, and an obviously annoyed patroller wanted us to pay to continue to ski there. And she was not impressed that we were from Alberta. Supply of BC bud must be tight! Is Summit Lake on public land? I guess it's better to ask for permission than to beg for forgiveness and we rolled out. Anyways, those were my first real runs on the Gignouxs, they skied awesome, I was stoked to race in them!


At the meeting, we were presented with a course that would avoid the corniced ridgeline skiing and skins-on descents of previous years. And there were lots of big guns attending (except for Nick Elson). Giddy-up!

It was cold the next morning and it took a while for everyone to get lined up so I was freezing in my skinsuit! I got my trademark fast start, but lost some places where the track steepened after leaving the groomed run. I skied the next descents well and enjoyed the climb up to the aesthetic bootpack. Things unraveled when I lost the flags on the 2nd to last descent, skied by the unmanned checkpoint and lost some time (but caught the guys in front of me, who also got lost) skinning up then descending back down to the checkpoint once we finally found it.

Fortunately that extra transition didn't lead to any skin failure issues as I was prepared with my secret weapon but knowing that the people who I had put some time into at the top of climb #4 were now well ahead of me, I mentally shut down, and went into "get to the finish mode". I ended up 7th whereas I was sitting in 5th before that mishap. Fortunately, I snagged a good draw prize from ROAM for my troubles!
On the way home, we stopped at Kootenay pass for a couple laps in the Baldy rocks area. We enjoyed our day, but that enjoyment was short lived after we arrived home and learned that there had been a fatality on the adjacent Lightning Ridge. So sad.

Posted by Edmonton Ski-mo at 3:34 PM No comments:

After the cold snap, the high pressure was pushed out and it started dumping. With the family day long weekend upon us, I thought it would be a good opportunity to check out Valemount instead of scouring my brain looking for places to find good, safe skiing around Canmore. Clear skies and moonlight through Jasper was great for staring at mountains I haven't seen for almost 10 years. It started dumping as soon as we crossed the BC border but we arrived in Valemount late with the full moon showing. Reiner and Karen played wonderful hosts, showings us the goods, and good food. 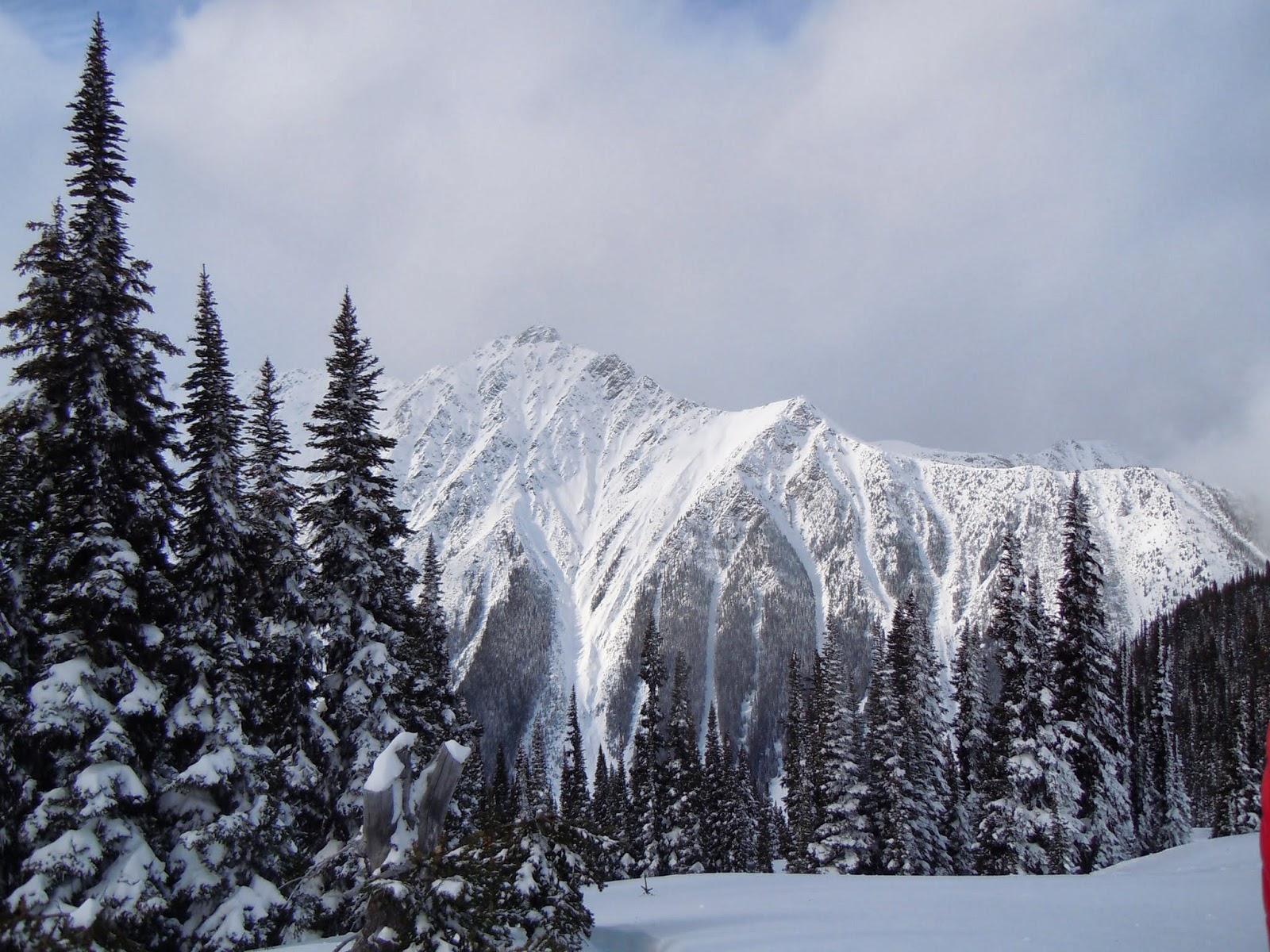 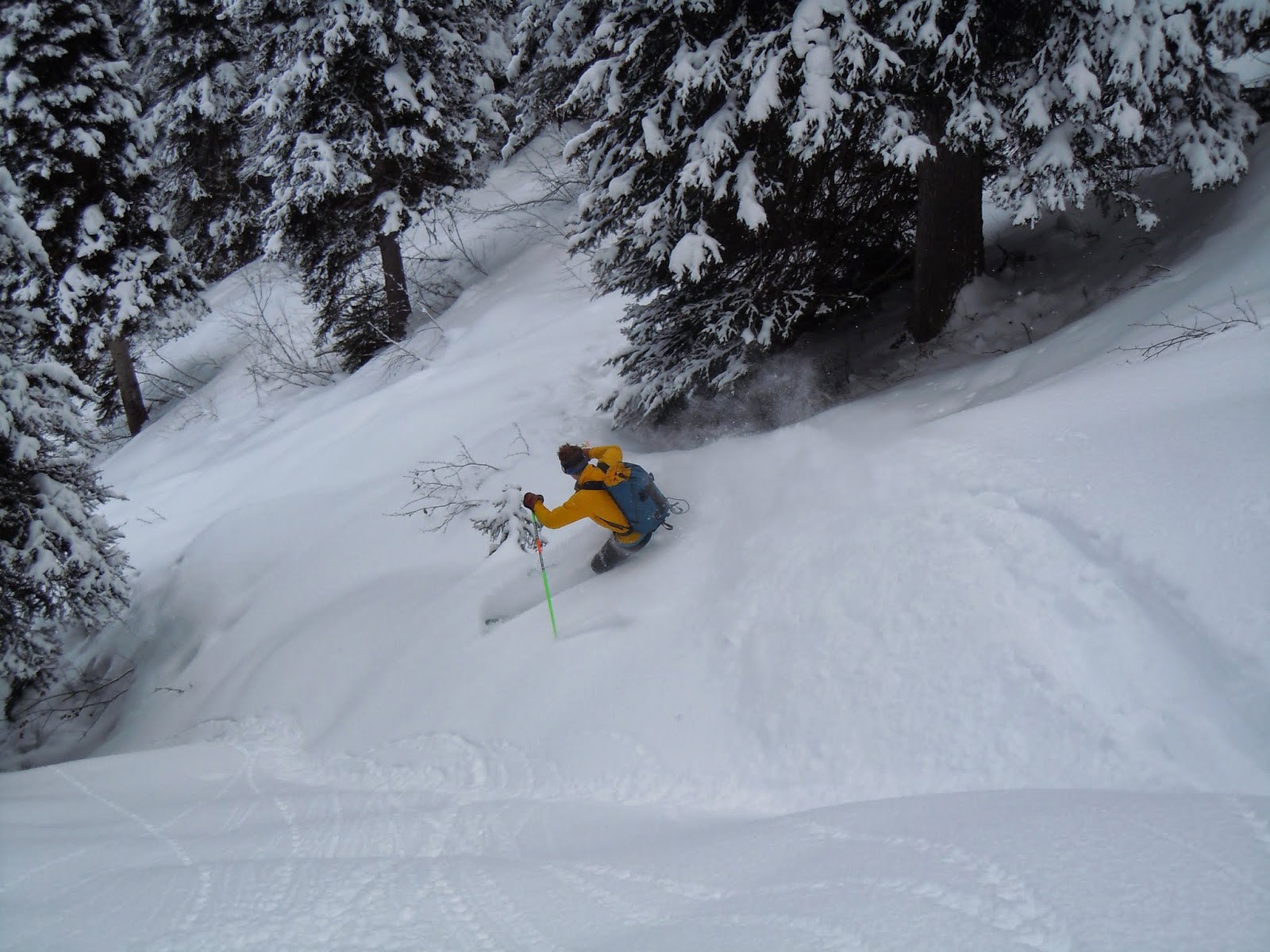 Posted by Edmonton Ski-mo at 3:11 PM No comments: