Once again I made the long trek from Edmonton for the Coldsmoke Festival and the ROAM Randonee race at Whitewater. Rain turned to snow on the drive up and over Kootenay pass for a short ski, then back to rain on the descent into Nelson for the pre-race meeting. 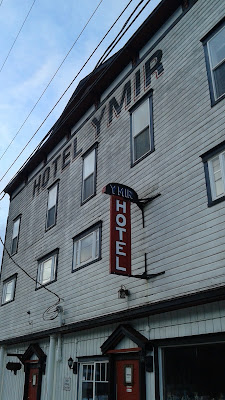 In typical interior fashion, temperatures cooled the course was blanketed in 20cms of snow on race day. The starting groomer climb had at least 10cms on it since being groomed, so I made sure to put a couple of tracks in during my warmup to keep things from bottlenecking off the start.

I got pinched in off the start and settled in, then attacked once there was space. Eric was the only one to follow me and we skied into the fresh bootpack with a good gap. Oh boy, my first major turn trailbreaking in a  race. We were soon joined by Ben and Travis and then another group of 3 and skied down the 1st descent as a group of 7.

Me and Eric took turns trailbreaking on the 2rd climb, pulling aside as skins failed. Although I blew my skins right before the groomer section, I was able to chase back on, while admiring the job Eric was doing up front, creating a gap while breaking trail! Fortunately the bookpack up to the ridge had been set. Without fresh snow to slow us down, the pace lifted.

Ben and Eric got a gap on the descent, leaving me and Travis chasing on the 3rd and final climb as they broke trail. It was not until Ben was breaking trail up the bootpack that we caught them. After the bootpack, I took my turn trailbreaking, using my full width and length skins to plod my way up. As the top of the climb neared, the skintrack flattened and Ben and Eric glided away while I could not answer the attacks. Ben caught Eric on the descent and almost skated to the win, while I ended up in 3rd place. 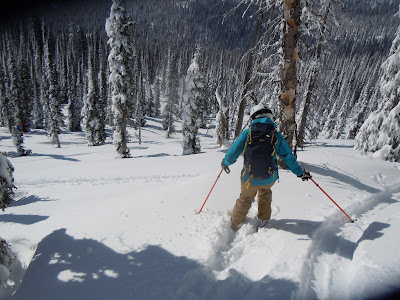